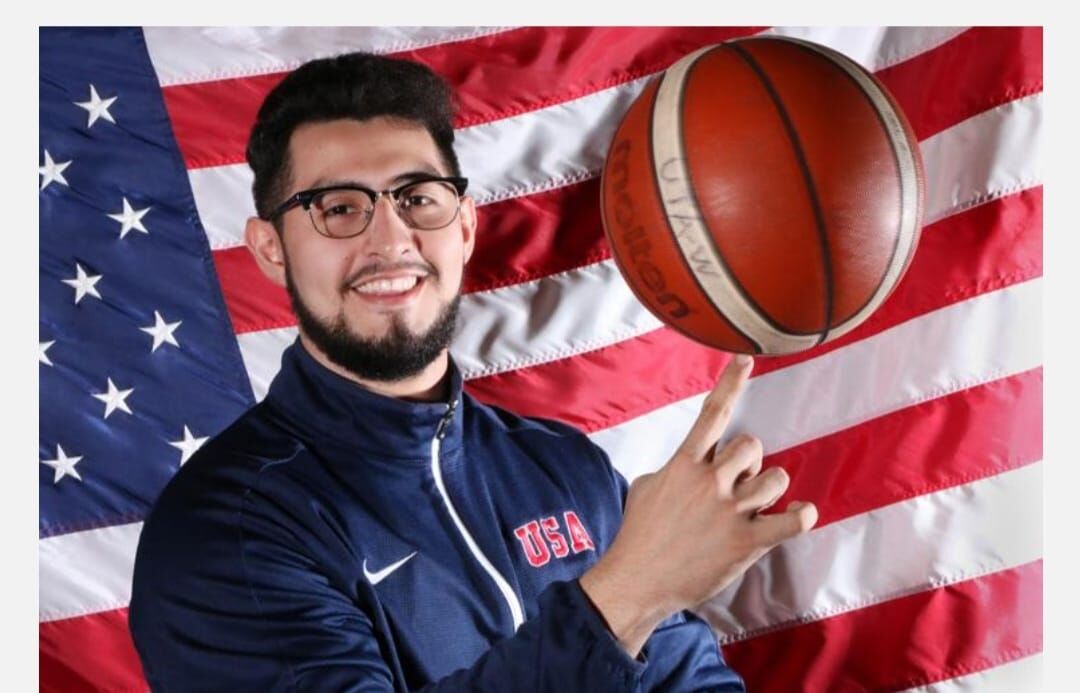 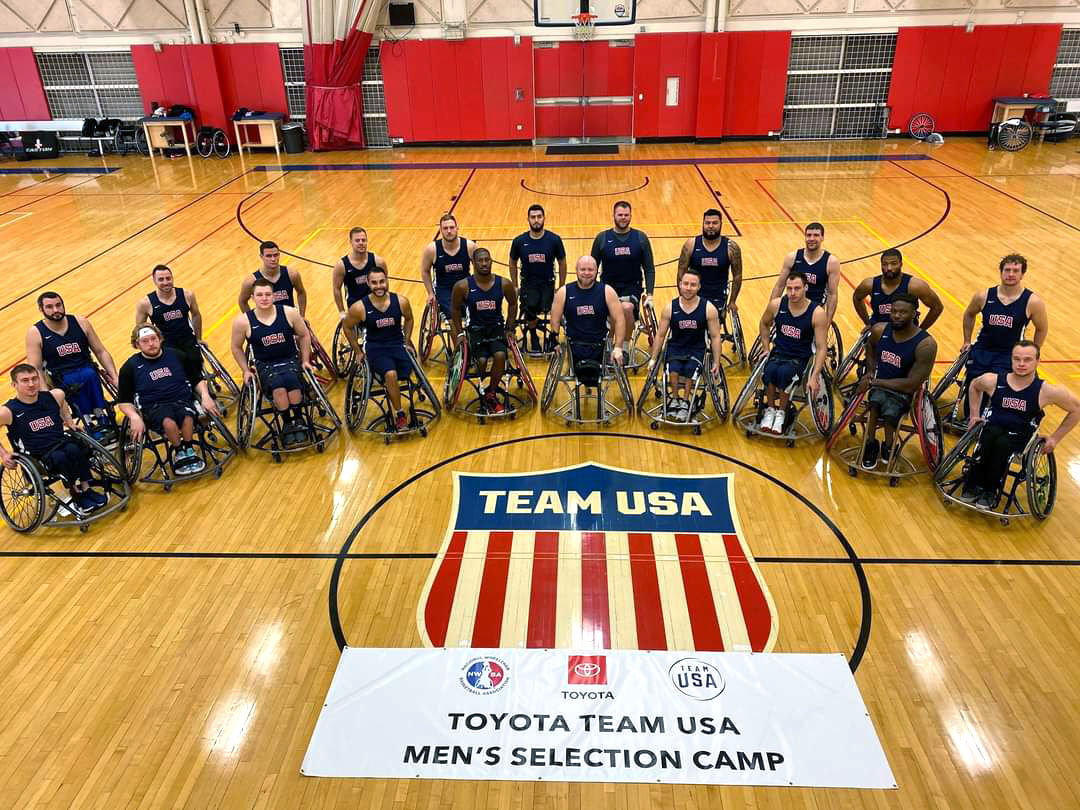 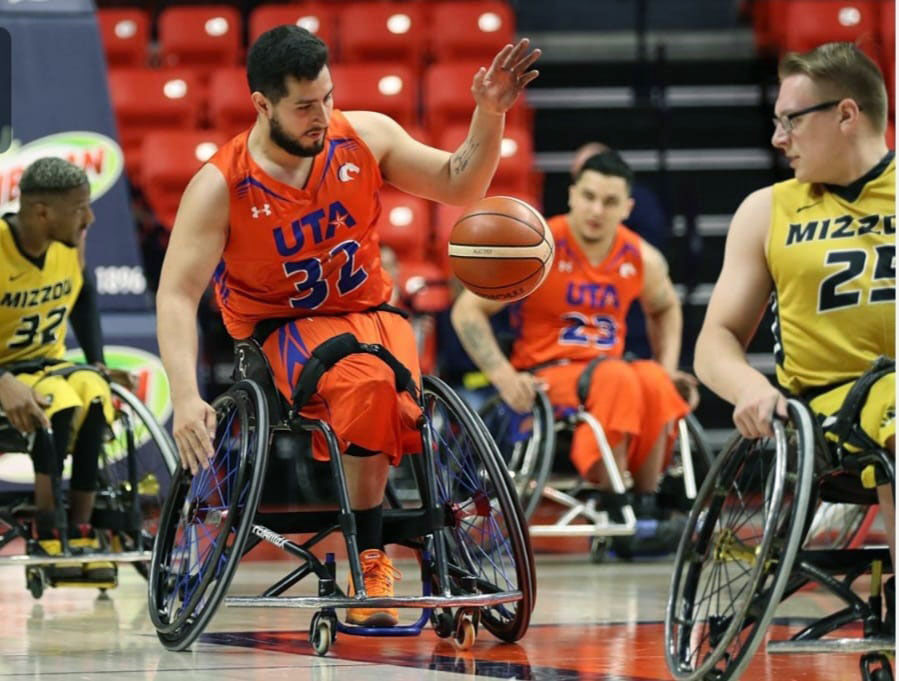 Elkins High School alumnus Fabian Romo (32) dribbles during a 2019 wheelchair basketball game. The Missouri City product's wheelchair basketball career has taken off in recent years as he is playing professionally in Spain and hopes to make the U.S. Paralympic Team this year. (Contributed photo) 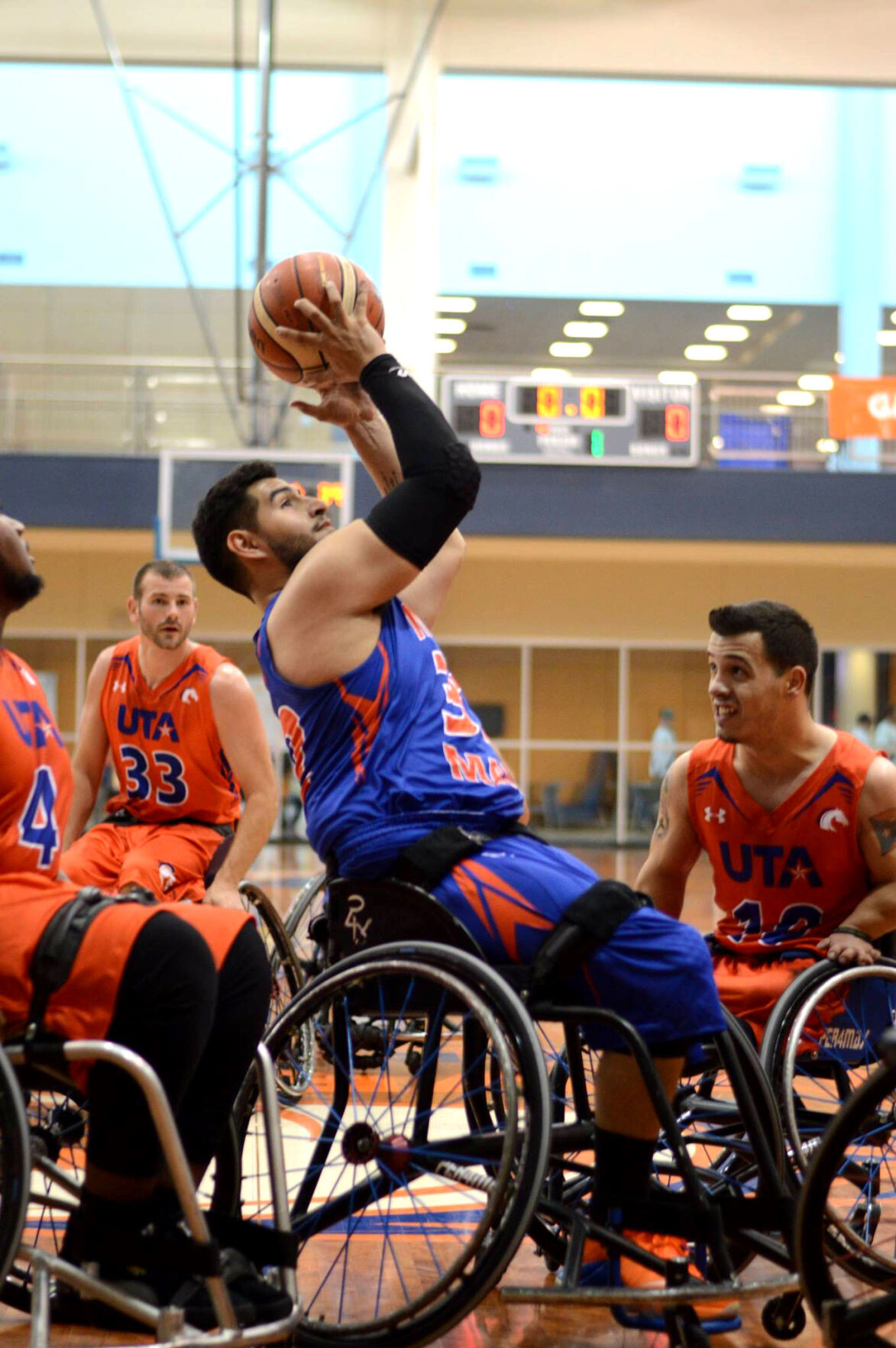 Fabian Romo, foreground, puts up a shot during a UT-Arlington wheelchair basketball practice in 2018. (Photo from Facebook)

Elkins High School alumnus Fabian Romo (32) dribbles during a 2019 wheelchair basketball game. The Missouri City product's wheelchair basketball career has taken off in recent years as he is playing professionally in Spain and hopes to make the U.S. Paralympic Team this year. (Contributed photo)

Fabian Romo, foreground, puts up a shot during a UT-Arlington wheelchair basketball practice in 2018. (Photo from Facebook)

No matter how daunting the obstacle, Fabian Romo has never backed away from a chance to shoot his shot. The 24-year-old is giving his latest challenge his all as he remains on the watch list for the U.S. men’s national wheelchair basketball team as it prepares for the upcoming Paralympic Games in Tokyo.

Romo, an Elkins High School alumnus and professional wheelchair basketball player in Spain, overcame the amputation of his left leg at 4 years old due to a birth defect. Amid the uncertainty of the COVID-19 pandemic, he used the downtime to work on himself and mentor younger collegiate teammates while he awaited the start of his professional career in Europe.

Romo said he expects Team USA to hold a select camp at the end of May or June, when the squad will be whittled down to its final 12 roster spots. He plans to wait to get his COVID-19 vaccine when he is back on U.S. soil, though the plans for Paralympics preparation remain fluid.

"We were supposed to have our final tryout (with Team USA) last May, but that got pushed back," Romo said. "So it kind of messed up everybody's plans. I was hoping to come overseas (to play in Spain) and thankfully I did. This was my first time trying to reach out and (try out for a Paralympic Games). It was kind of lucky."
Rolling up north

Romo caught the attention of University of Texas-Arlington (UTA) coach Doug Garner even before he signed his national letter of intent to play with the Movin’ Mavs in 2015, having attended summer camps at the school.

“He transitioned very quickly from the junior game to the college game,” Garner said. “He brought out the best of everybody who was on the court with him.”

Garner was particularly impressed with Romo’s ability to master maneuvering a wheelchair in a high-intensity sport like basketball, because Romo uses a prosthetic leg to get around and did not have to depend on using a wheelchair until he was introduced to the sport as a freshman in high school, where he was a standout with the TIRR Memorial Hermann Hotwheels travel team in Houston.

“It’s like the first time you feel free from your disability, in a way,” Romo said. “Because everyone in the sport is the same as you, everyone has their own basketball chair, everyone has that same ability to go out there and compete.”

Romo shot 45 percent from 3-point range during his career and was one of the leaders of the 2017 UTA team that won a national title. He was a senior on last year’s team that had gone undefeated up until its championship tournament was canceled due to COVID-19.

That same year, he was also called up to play for Team USA’s U-23 wheelchair basketball team.

“He made some great skill improvements and consistency in shooting,” Garner said. “He became a leader on the floor for the team. You always need one or two guys that are going to help bring everything together, and that’s really what he did. He understood that by playing his best, he gave some of the other players opportunities to play their best.”

In that sense, Romo was like another coach on the floor for the Movin’ Mavs, Garner said.

Romo completed his undergraduate degree in biomedical engineering last May, but his graduation ceremony was canceled because of the pandemic.

“I didn’t know what I was going to do after graduating,” Romo said. “No one really knew what was going to happen (when the pandemic hit).”

Romo, a native Spanish speaker, said he was thankful to Team USA Paralympic veterans who he reached out to for support. One of those players was a Spanish player and Spanish speaker who played collegiately in Alabama. He and Romo both had an opportunity to appear on a Spanish-language podcast about adaptive sports and wheelchair basketball in the U.S.

While the U.S. is a top destination for prospective wheelchair basketball players looking to earn a scholarship and play concurrently with their desired field of study, it lacks a professional league, which is why players like Romo end up in Spain, France, Germany or Turkey.

The connections he made with the podcast helped Spanish scouts see his game tape, and the disappointment of missing out on celebrating his graduation was followed by a reason for hope: Romo received a call from a Spanish Wheelchair Basketball League team — Iberconsa Amfiv  — in Vigo, Spain with an offer to play professionally overseas.

While he waited for several months to have his visa approved, Romo took full advantage of Garner’s offer to continue training at UTA.

“I was able to practice with the young guys there and help them out in any way that I could,” Romo said. “They helped me out and kept me in shape with practices every morning. It’s something I didn’t have to do, but it’s something I wanted to do.”

Fabian’s parents, Arturo and Sylvia Romo — who have lived in Missouri City since 1997 — said they were proud of their son’s determination to fight for a roster spot from the time he arrived in Arlington.

Sylvia said she saw her son’s competitive fire start when he was competing against able-bodied kids as a young swimmer, when his prosthetic limb drew eyes from his fellow swimmers and spectators across the pool.

It was the ultimate equalizer, Arturo said, “because everyone jumps off the pool with one leg.”

Though Fabian acknowledged he was a latecomer to wheelchair basketball, he said he was grateful for the support of his parents and three older siblings.

Arturo and Fabian’s grandfather drove 1,500 miles from Missouri City to Toronto to see Fabian compete at a U-23 tournament, beaming with pride as “The Star Spangled Banner” played before the start of each game with Fabian sporting the letters “U-S-A” on his chest.

Coming from a working-class background as a contractor installing drywall on the South Side of Chicago, Arturo said having the chance to travel as a family to Fabian’s games and to live stream his son’s matches against Spain’s top competition on the other side of the world has been a joy for him.

“To be a part of the Team USA family, it was awesome,” Arturo said. “To hear the national anthem, and to see my kid there, wow.”

And for Sylvia, it was a double blessing to watch her son succeed academically and athletically.

“We are proud anyway,” Sylvia said. “But this made us extra proud.”

The youngest Romo said he’s excited to be living out his dreams and hopes he can earn a chance to do so on his sport’s biggest stage.

“My family helped me and supported me along the way,” Romo said. “I wouldn’t have been able to be here if it wasn’t for them.”