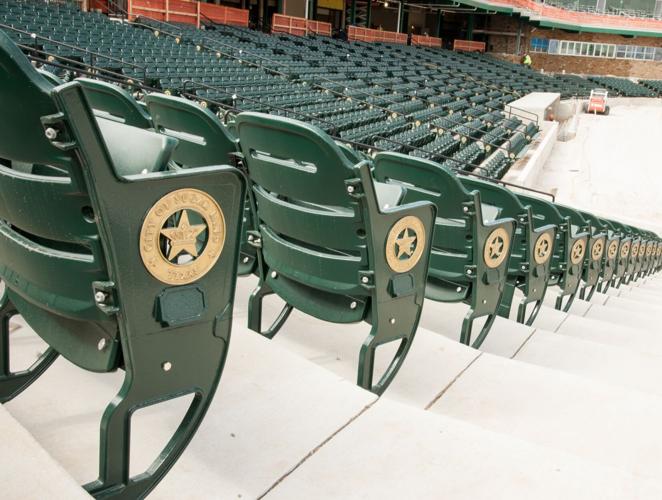 The city of Sugar Land is accepting bids until Thursday on seats from Constellation Field, which is being renovated as part of the franchise’s rebranding. (Photo from City of Sugar Land Facebook) 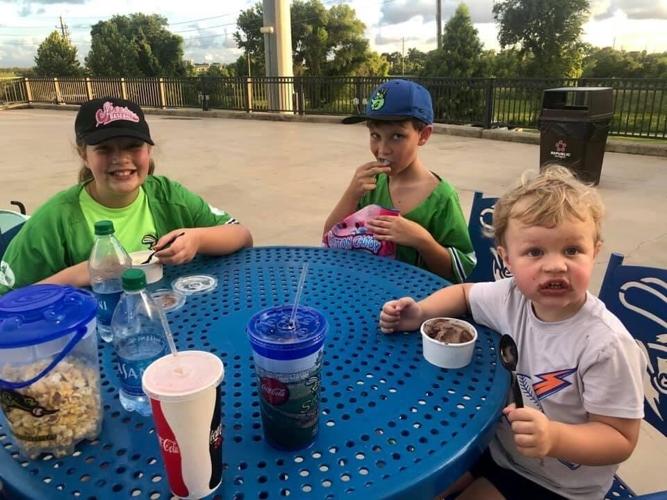 Georgia, Augustus, and Owen Barnhill chow down on snacks while sitting in Constellation Field seats adorned with the Skeeters logo in 2020. Their mother Amy is one fan hoping to purchase some of those seats that are currently up for auction. (Contributed photo)

The city of Sugar Land is accepting bids until Thursday on seats from Constellation Field, which is being renovated as part of the franchise’s rebranding. (Photo from City of Sugar Land Facebook)

Georgia, Augustus, and Owen Barnhill chow down on snacks while sitting in Constellation Field seats adorned with the Skeeters logo in 2020. Their mother Amy is one fan hoping to purchase some of those seats that are currently up for auction. (Contributed photo)

With the Sugar Land Skeeters name now in the past, residents and fans have a limited time in which to bid for a piece of Sugar Land and Constellation Field history.

For Sugar Land resident Leonard Chan, who plans to bid on several seats, it’s a chance to forever have a keepsake of a place that represents who he is. He’s hoping to be able to purchase at least two seats for his backyard to join the piece of Astrodome turf that he already owns as historical keepsakes.

“I have always considered Sugar Land my home, and been a baseball fan since Jeff Bagwell’s rookie season,” said Chan, whose family initially moved to Sugar Land in 1988. “I am not some bandwagon Sugar Land fan – this is who I am.”

Up until this Thursday at 2 p.m., the city of Sugar Land is auctioning off Constellation Field stadium seats as renovations begin on the field, which is being redone as the franchise opens its run as the Sugar Land Space Cowboys in just a few weeks.

But though they can replace the seats, fans will forever hold onto the memories and stories those seats could tell. Chan said one his favorite memories from those seats at Constellation Field include the dog days at the ballpark, where he’d stay and watch the Corgi races following the game with his own four-legged friend.

And from that memory to the countless games he attended since moving back to Sugar Land from Austin in 2018, he said the history of Constellation Field and of the Skeeters is about more than just baseball.

“When I was a kid, I always dreamed of Sugar Land getting a sports team,” he said. “…Constellation Field is not just (the) history of that building, but a history of the city that I have claimed home before it boomed and a history of Texas baseball.”

They can bid on any quantity of chair available, according to the city.

“The chairs were over 10 years old and had reached the end of their useful life,” the city said on Facebook. “Plus, once rebranding was identified it necessitated the replacement of the chairs. In this case, modifications to the chairs were going to be far more costly than replacing them.”

Resident Amy Barnhill was looking to bid on some of the high-top Skeeters chairs to put around her Sugar Land home, saying she wanted to purchase five of them for her and her family to lounge around the pool in.

“I love the (Skeeters) logo cut into the back of the chair,” she said Monday.

Barnhill, who has been making trips to Constellation Field since moving to Sugar Land in 2018, said one of her favorite memories in the soon-to-be replaced seats includes attending the Skeeters’ Constellation Energy League games during the onset of the COVID-19 pandemic in 2020 after the team broke from the Atlantic League.

And though a handful of seats from a stadium that had thousands of them may not seem like much, having them would forever link the Barnhill family to that memory and the Skeeters franchise.

It would be a memory all its own, and one whose beauty is in its simplicity every time she sees them.

“We were so glad to be out and doing something normal,” she said. “We sat at one of the tall blue tables with ‘Skeeters’ chairs and had just about every ballpark snack there is.”