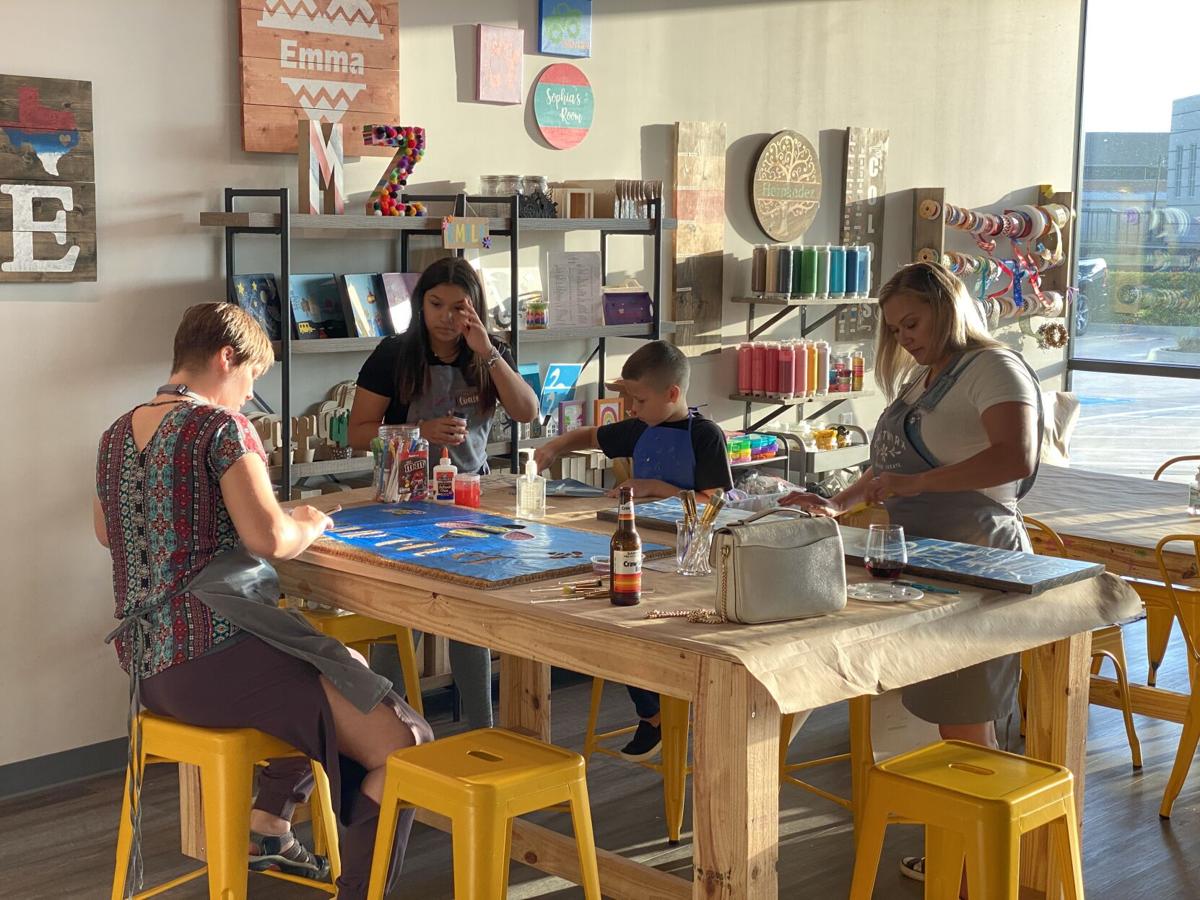 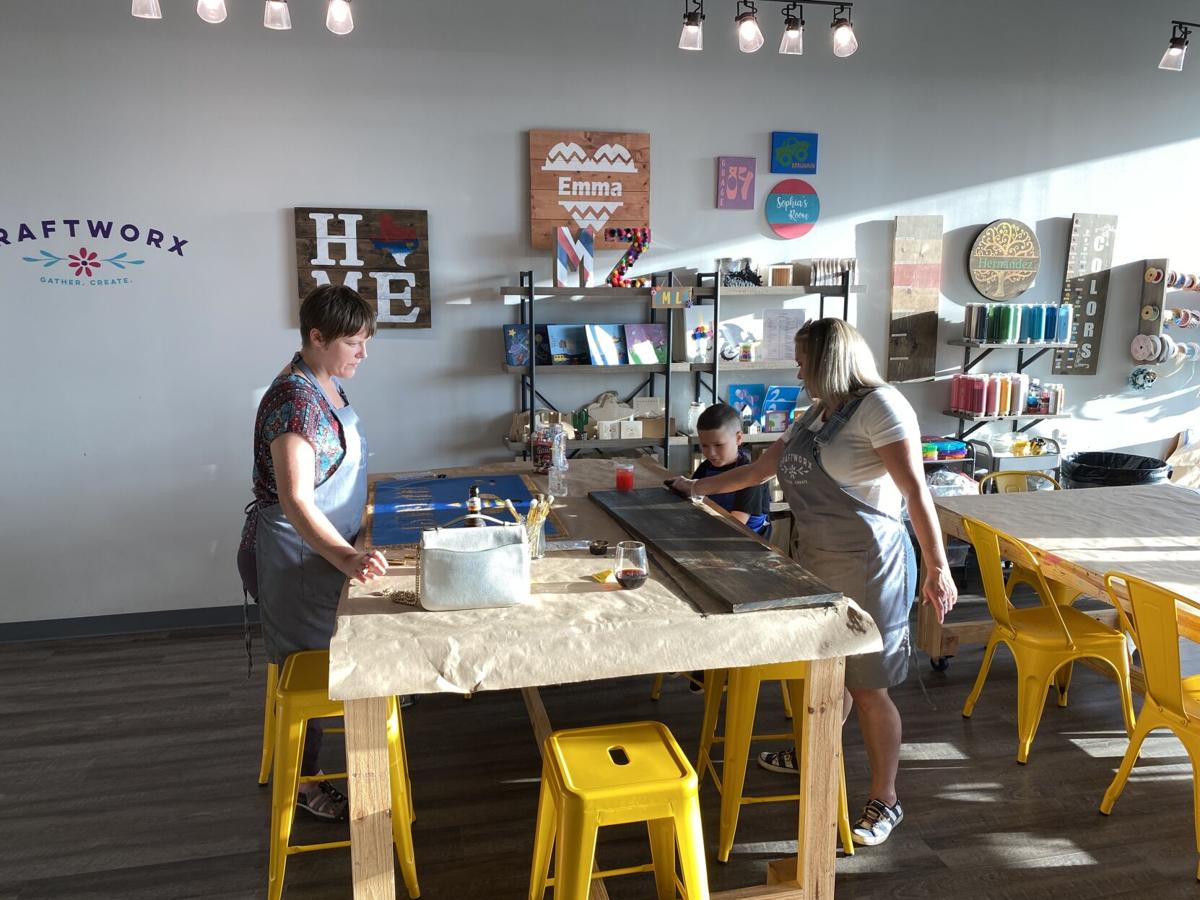 Sisters Stephanie Oldmixon of Rosenberg and Christin Geiselman craft welcome gifts for each other as Geiselman’s son Bryce, 8, looks on Thursday at CraftWorx, 11135 Harlem Road Ste. 220. (Photo by Stefan Modrich)

Sisters Stephanie Oldmixon of Rosenberg and Christin Geiselman craft welcome gifts for each other as Geiselman’s son Bryce, 8, looks on Thursday at CraftWorx, 11135 Harlem Road Ste. 220. (Photo by Stefan Modrich)

If you’re looking for something to do on a night out that’s a little bit different than your typical evening out on the town at a bar or restaurant, CraftWorx owner Alexis Geissler may have a solution for you that unleashes your creative side.

The do-it-yourself craft studio at 11135 Harlem Road Ste. 220 in the Aliana subdivision of Richmond offers “a variety of different projects” for both kids and adults, Geissler said.

She also said that the projects are suited for any range of skill levels, from beginners to experts.

“We have wood signs, but we also have resin, we have string art — we have all different kinds of projects,” Geissler said. “Our projects are designed so that a novice who’s never done a craft in their life would be successful. We give you all the tools and instruction you would need to be successful. But our projects are flexible so that if you are an experienced crafter, you’ll still have fun doing the same kind of project, maybe you’ll add more embellishment to it or get a more complicated design.”

“You can come and have a complete experience,” Geissler said.

CraftWorx also has classes and events, which are available at the following link: https://www.craftworxusa.com/classes-events.

CraftWorx offers walk-in appointments, but you can also book an appointment in advance, Geissler said.

Lindsey Sturrock said she has brought her children to CraftWorx’s spring break camp and was impressed by what her kids brought home.

“I really like the quality of (Geissler’s) products,” Sturrock said. “I feel like they’re not as disposable. My kids brought home wooden castles and a fairy garden and things like that, and they actually play with it. It’s stuff they’ll use.”

Sturrock had friend and neighbor Dia Patel with her during her crafting session. Patel said she’s thinking of bringing her son, 3, to CraftWorx the next time she visits.

“My son loves to draw,” Patel said. “I’ve never been to any place like this, so I’m excited.”

Sisters Stephanie Oldmixon of Rosenberg and Christin Geiselman are both preparing to move — Oldmixon to Nacogdoches and Geiselman to Richmond — and they said they were working on a welcome mat and welcome sign to help usher in the new change in their lives.

“We’re both in the process of building new homes,” Oldmixon said. “It’s a cool housewarming gift.”

Geiselman brought her son Bryce Geiselman, 8. He was occupied by making slime, one of the kid-friendly activities at CraftWorx.

“He’s been wanting to make this slime for a while,” Christin Geiselman said. “He missed out when they did it at school.”

David Anzaldua and his wife Kimberly Anzaldua said they are regulars at CraftWorx and have been friends with Geissler and her husband for the last five or six years. They are also neighbors in the Waterview Estates subdivision of Richmond.

He said they have attended tutorials for making charcuterie boards and other glasses Geissler leads.

“There’s never a lack of cool things to do,” he said.

“We all did little projects and had a good time,” she said. “It was a nice place for everybody to get together instead of going to a restaurant. We got to actually do something that we could take home.”

Previously, the Anzalduas have made welcome signs, trays and string art that they used as a mask-hanging station, among other things. They often gift their creations to friends and family, as they said they were planning to do as a birthday gift for Kimberly Anzaldua’s mother.

The Anzalduas painted red, white and blue triangles in a quilt pattern on a sleek wood board.

“You can’t go to a big box store and buy (a handmade craft),” David Anzaldua said. “It’s nice to give somebody something with their name on it that you worked on.”