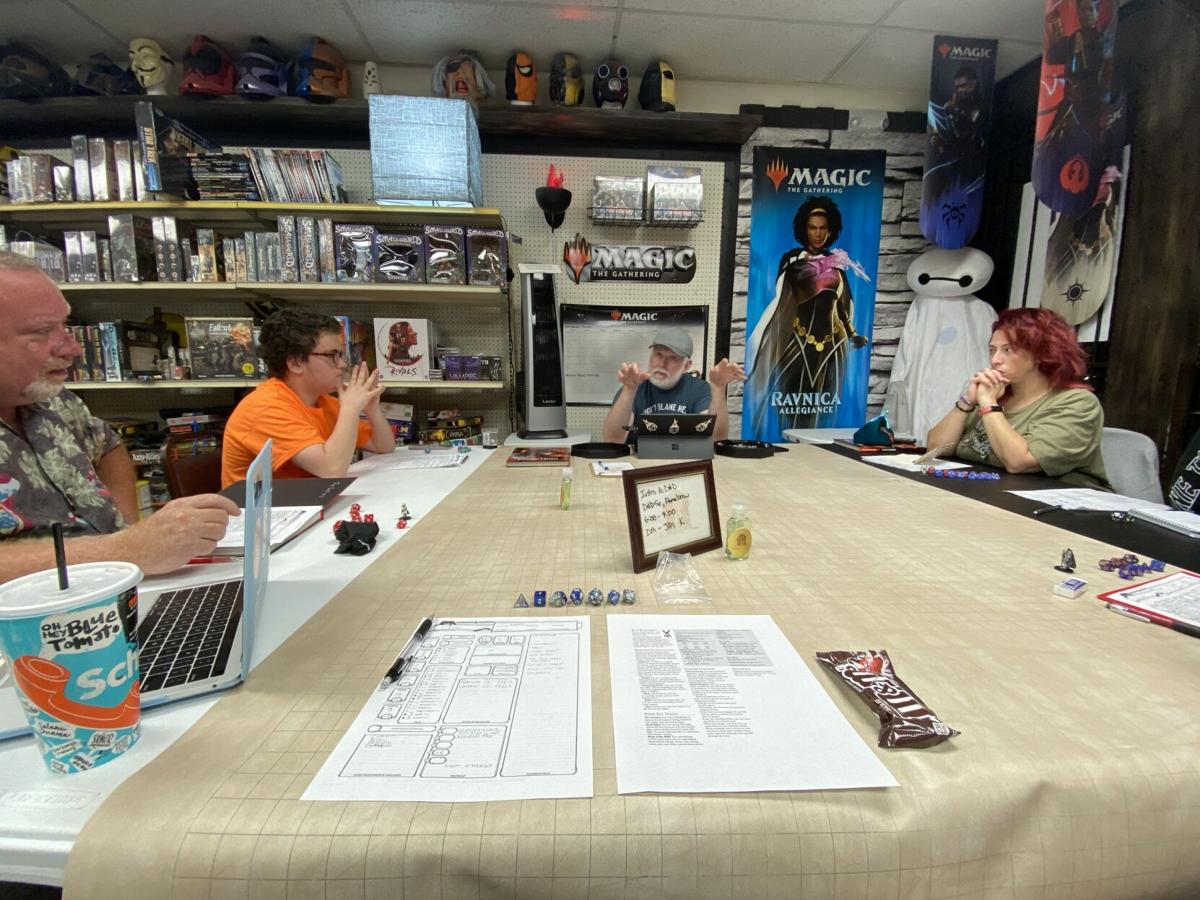 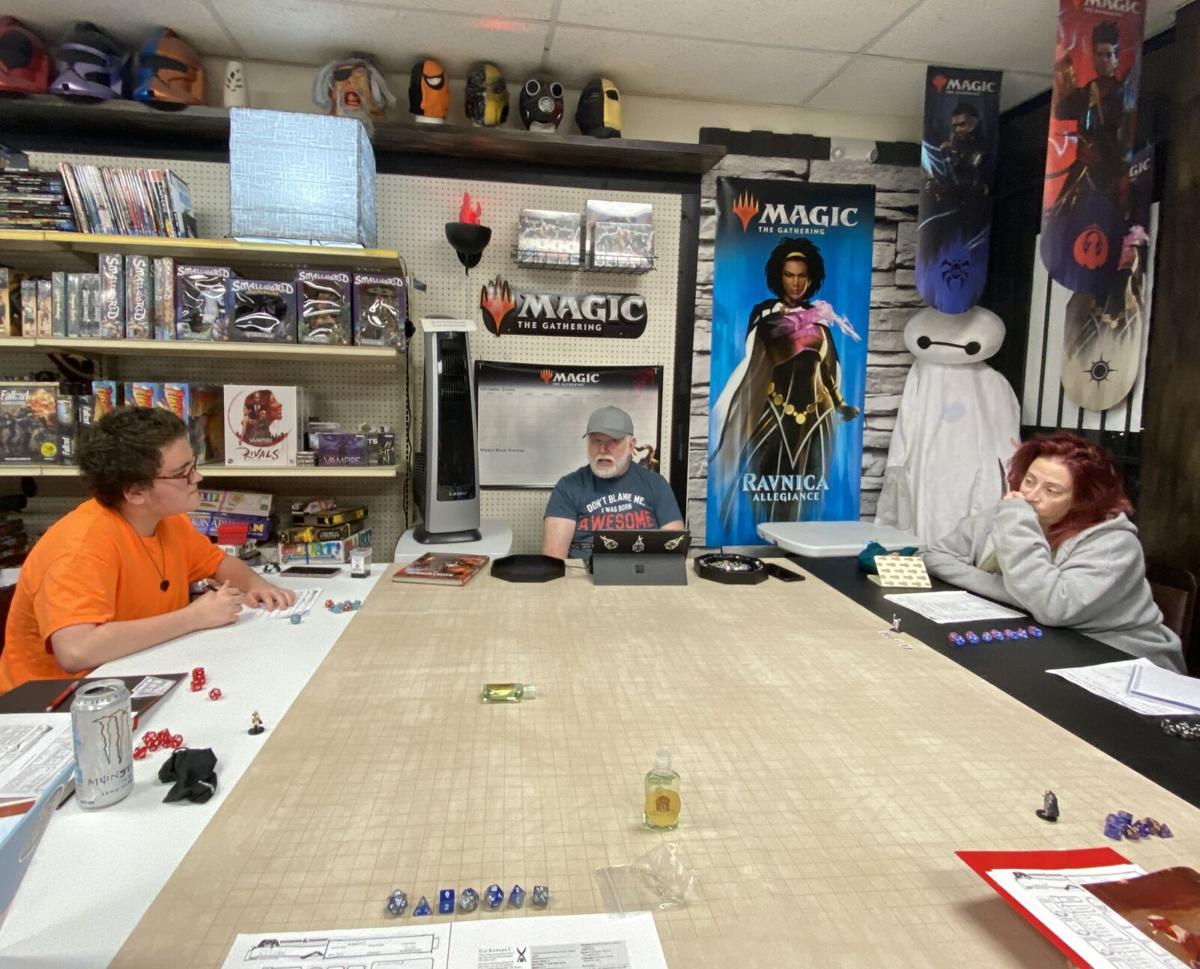 I’ve always been a big fan of board and card games, having engaged in many spirited rounds of Uno, Sorry, Phase 10, Cards Against Humanity and more.

In my childhood, I even briefly dabbled in the popular Pokemon and Yu-Gi-Oh trading card games.

But since I’ve lived in Texas, I’ve been able to meet new friends who have exposed me to new things, namely, Dungeons & Dragons. I’ve long known of this tabletop role-playing game, but I never gave it much thought until recently.

I’m glad I was able to venture out of my comfort zone to find that playing D&D, as it is commonly known among its community of millions of players worldwide, was an adventure well-worth indulging.

Keller said she learned to play at age 12 with her older brother and has since passed on the love of role playing board games to her son Christian, who is now a college student.

The name Golem’s Gate, I learned, is not a reference to Lord of the Rings. Rather, it is a nod to one of Christian’s favorite elements of the game when he was learning to play as a child.

A golem, in the D&D universe, is a magical construct, a monster that can be made of flesh or clay and is controlled in D&D by a wizard or cleric.

She said she used to drive nearly 90 minutes to play D&D at a store north of Houston, before opening up her own business in 2017 when she saw there was a market for such a place in Fort Bend County, particularly among Sugar Land and Missouri City residents.

The store hosts “Intro to D&D” nights four nights per week, along with an “Adventurer’s League” for beginners. Golem’s Gate also hosts other popular tabletop game nights featuring Cyberpunk and Pathfinder and even a Star Wars role-player game that meets on Fridays.

As Keller explained to me, the games cost $3 per hour, half of which is paid out as a table fee, and the remaining amount is paid out in store credit to the game master (or dungeon master in the case of D&D) to incentivize them to purchase books and games and other equipment from Golem’s Gate.

It’s up to the (game masters), they kind of drive it with whatever they want to run,” she said.  “We let them give it a chance. If it keeps running great, if it fizzles out, they try the next thing to find whatever works for them.”

For $25 per month, you can purchase a membership that allows access to a separate collection of figurines, maps, and games. For $7.50, you can access a fully-stocked painting station to paint your own figurines or characters. The store also has a 3D printer that can print out a design for a player after they’ve used a popular web-based platform like heroforge.com, for example.

There are also more conventional board games that are available in the board game library.

Keel set me up with a pre-generated character and walked me through the basic rules of the game and the process of custom-building a character, choosing from mental and physical attributes, skills and purposes.

I selected an Elf-Ranger, and my skills included archery and navigation, among others.

Keel, the dungeon master, or administrator of the game, led us on an adventure to a mythical city where we were tasked with protecting an ambassador who had been trapped in the midst of civil unrest. We were to provide her safe passage to her homeland and fend off demons and many other foul creatures that impeded our progress by rolling dice to either do damage to opponents or perform a defensive “saving roll” to counter an attack on one of us or the other players in our party.

I enjoyed Keel’s storytelling and the patience with which he shepherded several new players through the complex game. The imaginative and enterprising nature of our crew to solve problems and challenges throughout the game was evident, and it seemed each player chose a character that was emblematic of their real-life personalities.

I felt Keel and Keller both created an inviting atmosphere that was accommodating to both the new and experienced players in our game and the games happening concurrently at other tables at the store.

“A lot of people are very intimidated by it,” Keller said. “We wanted to make it very easy for people to find out what D&D is all about.”

For more information on upcoming events, visit meetup.com/GolemsGate/ or call 281-265-6050.