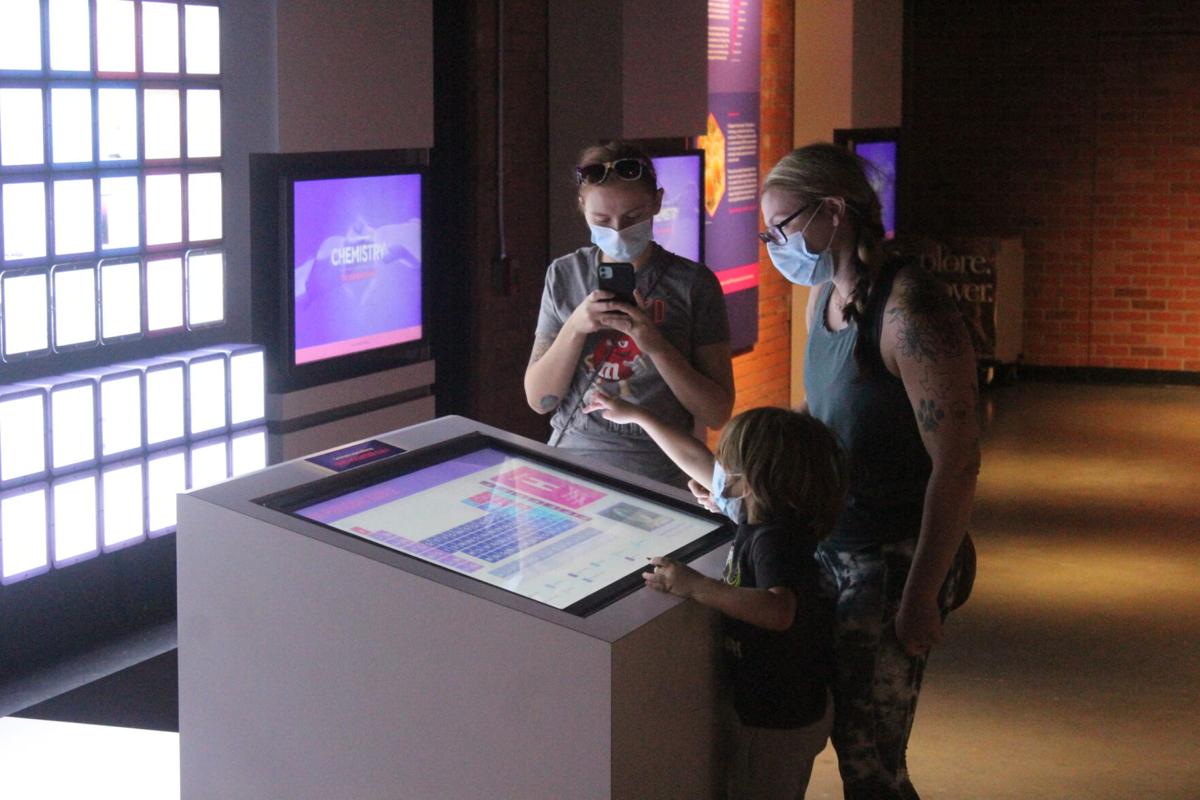 A family interacts with a virtual periodic table at the Houston Museum of Natural Science's Sugar Land Campus during its sensory-friendly event. (Photo by Stefan Modrich) 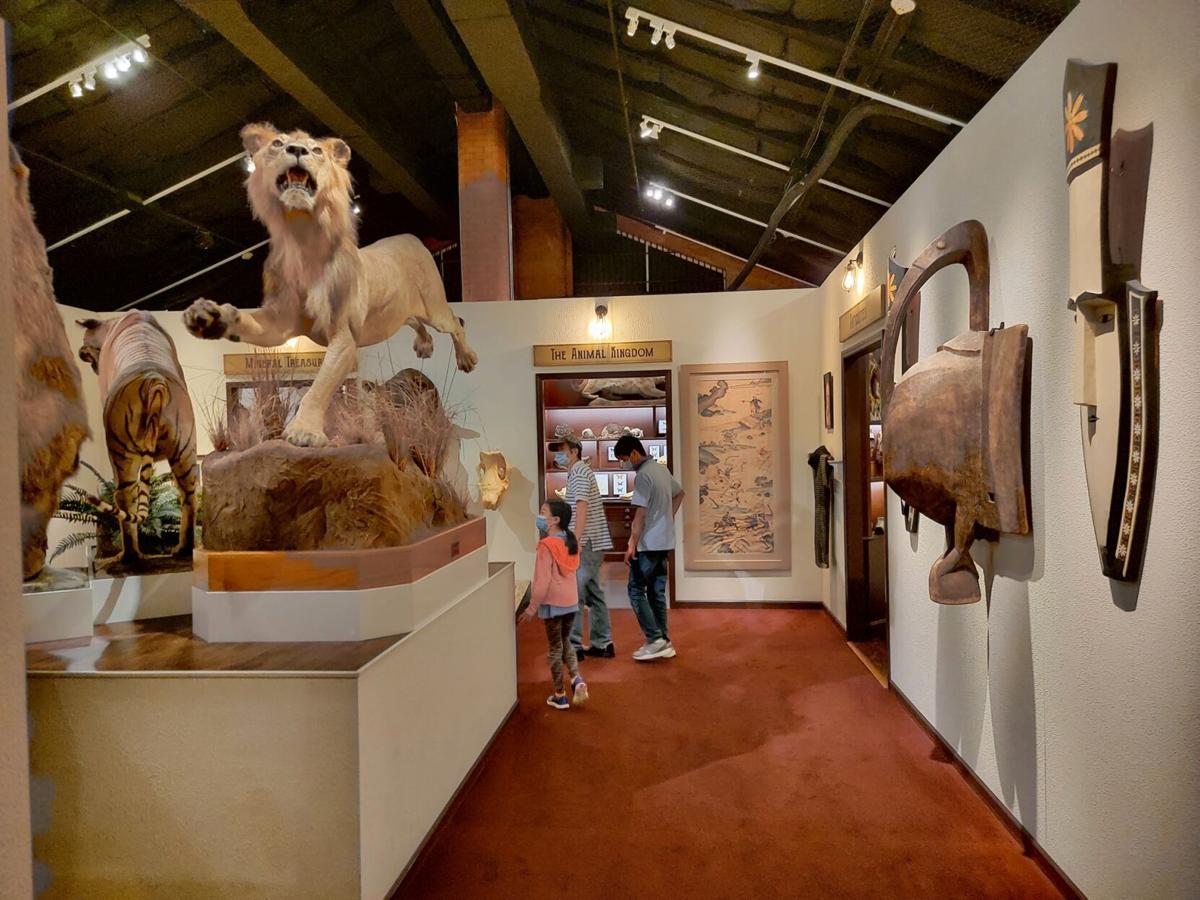 A family browses Saturday through the wildlife section of the Houston Museum of Natural Science's Sugar Land Campus during its sensory-friendly event. (Contributed photo)

A family interacts with a virtual periodic table at the Houston Museum of Natural Science's Sugar Land Campus during its sensory-friendly event. (Photo by Stefan Modrich)

A family browses Saturday through the wildlife section of the Houston Museum of Natural Science's Sugar Land Campus during its sensory-friendly event. (Contributed photo)

The skeleton of a Tyrannosaurus Rex towered over me as I walked through the entrance of the Houston Museum of Natural Science’s Sugar Land campus last Saturday.

The museum is filled with modern and interactive exhibits — ranging from a touch-screen periodic table and molecule creator to movable magnets and pendulums — and is primarily geared toward its main cliente of young families with children, said Kavita Self, the director of the museum.

The museum, which was once a warehouse in the Telfair neighborhood that had fallen into disuse, opened in 2009. Among its most popular exhibits are its butterfly garden and insect zoo.

“One of the things that we tried to model for kids is how local science is,” Self said. “Science is in your backyard, basically. You can go outside and learn, and that's the best classroom that there is.”

One example of this was a “tarantula tea party” hosted by Erin Mills, an entomologist, or scientist who studies insects.

Mills said she wanted young children to learn about which insects are safe to handle, and that this knowledge is practical for both kids and adults.

Matti Wallin, accessibility programs manager with HMNS, told me the purpose of Saturday’s event, in partnership with The Arc of Fort Bend County, was for The Arc’s members to test some of the museum’s “sensory-friendly” features designed for the special needs community, particularly those on the sensory spectrum or Autism spectrum who are sensitive to bright lights or loud sounds.

In an effort to create a more "sensory-neutral" environment in a place where some children might be overstimulated, bright lights on touch screens or exhibits with backlit buttons were dimmed. The volume of videos playing across various exhibits were quieter from the first hour of the museum's opening than at the end of the event, when the museum's exhibits returned to their default settings.

Karri Axtell, youth program director at The Arc of Fort Bend, said she initially was planning to take a group of Arc members down to the Hermann Park location in September, but decided to push back the trip due to a surge in the number of COVID-19 delta variant cases.

She reached out to Wallin and the Sugar Land campus staff over the summer to plan the event there in the fall instead.

Wallin said the museum is hoping for feedback that can help the museum make the necessary adjustments to its exhibits to make them accessible for all guests. She also sent out an email survey to all who attended the event.

“Based on the feedback we get,” Wallin said, “we're hoping to do a sensory guide about the halls that on a regular day might be too loud or too bright.”

Axtell said she hopes that the museum will have events throughout the year for families of children with sensory difficulties to have a quieter, calmer experience. Being surrounded by families who can relate to what other parents and children are going through is an important support system, she said.

“If your child has a little bit of a difficult day or is starting to have a meltdown or something, this is just a more welcoming and accepting environment,” Axtell said.

I was impressed by the technology on display at the museum and its chronicling of the evolution of the energy industry in the region, as well as lesser-discussed topics like the prevalence of salt domes in the area and the history of salt as a global commodity.

Not only does the museum explore physics and chemistry, it also does a good job of showcasing the geology and the biodiversity of the area and from all over the world, with a prominent display of shimmering minerals from India.

Axtell said it is important that attendees provide constructive feedback to ensure the museum will truly be sensory-friendly, and that the museum may partner with other organizations similar to The Arc in the future.

“You want to make sure you're serving the population,” Axtell said. “(So) you don't launch it without really knowing (what works). Maybe they’ll have different feedback on what does or doesn't need to be in the sensory-friendly backpack or any of the exhibits and they'll make improvements from there and it’ll be even better, but I thought it was really good and I enjoyed it.”