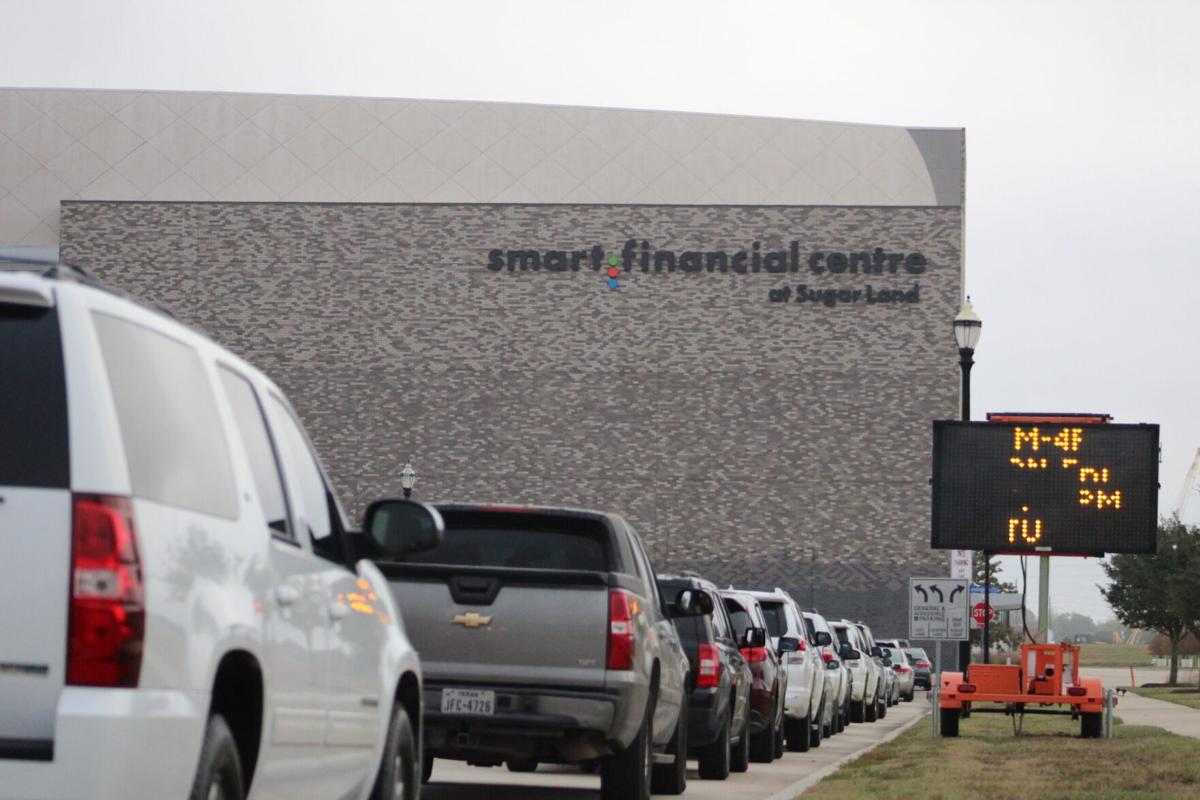 Cars wait in line Saturday outside Smart Financial Centre in Sugar Land for a Thanksgiving turkey and food distribution put on by Families Helping Families Houston. (Photo by Stefan Modrich) 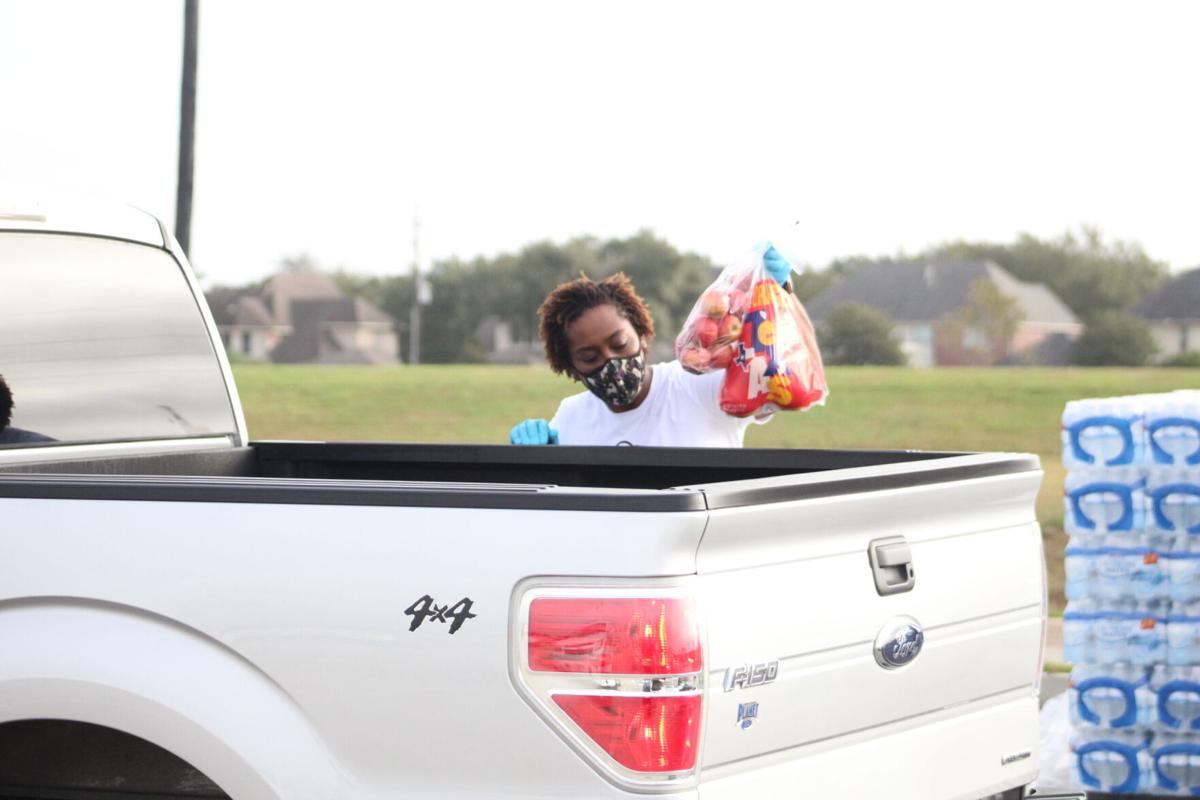 A volunteer loads oranges into the bed of a truck Saturday in the parking lot of the Smart Financial Centre in Sugar Land for a Thanksgiving turkey and food distribution put on by Families Helping Families Houston. (Photo by Stefan Modrich) 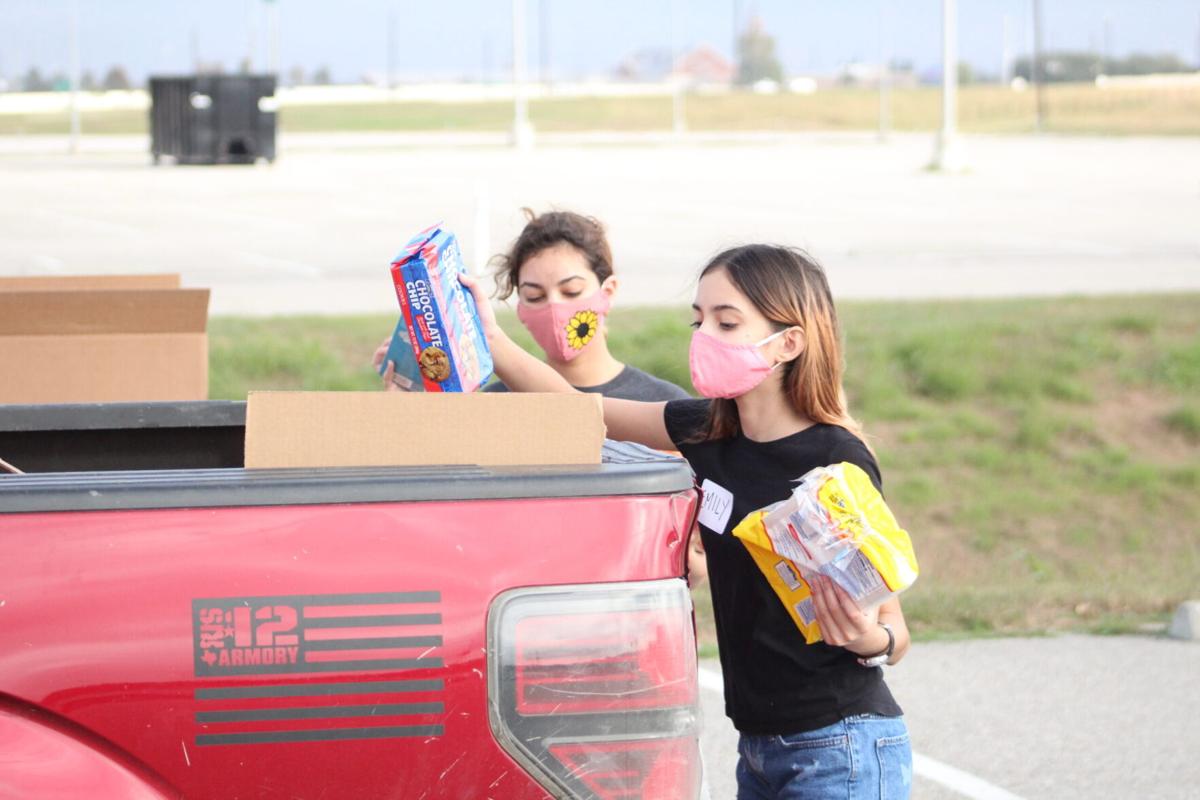 A volunteer loads cookies into the bed of a truck Saturday in the parking lot of the Smart Financial Centre in Sugar Land for a Thanksgiving turkey and food distribution put on by Families Helping Families Houston. (Photo by Stefan Modrich)

The weekend before Thanksgiving is among the busiest time of year for nonprofit and charitable organizations, particularly food pantries and food banks.

That hasn’t changed during the COVID-19 pandemic, even though groups like Quincy Collins’ Families Helping Families Houston (FHF) have been forced to adapt their distribution methods. The backbone of that adaptation is volunteers, approximately 75 of whom assisted in Saturday morning’s drive-through food distribution event at Smart Financial Centre in Sugar Land.

One Richmond couple, Randy Balla and Ritu Balla, has been volunteering for each of the last three years with FHF. They said they are neighbors of Collins.

Ritu said she met Collins through a local parent-teacher organization, and ever since, she has brought her two daughters along to volunteer at several events. She said it is important to teach them the value of service.

“We bring our kids every year and they’re part of it,” Ritu said. “And they learn to give back. It’s hard work, behind-the-scenes kind of stuff. COVID-19 makes it a lot harder. But it’s worth doing because there are so many families in need, so we have to keep doing it, and serving them.”

Collins was busy coordinating the arrival of truckloads of food and supplies, directing and receiving feedback from some of the volunteers who were present. At around 8 a.m., Collins tasked a group of helpers with finding a truck to obtain 50 additional turkeys from a nearby HâEâB, giving them a total supply of 400 turkeys to deliver to those in need.

A line of cars began to stretch from the entrance to the parking lot along Lexington Boulevard down to Aberfeldy Street as early as 7:45 a.m.

Some drive-up attendees said they showed up at 7 a.m., and waited two hours or more for the food distribution that began shortly before 9 a.m.

At 8:30 a.m., Collins had the group form a socially-distanced circle in the parking lot that was the staging area for the food pick-up, and said a prayer over the loudspeaker of a Fort Bend County Constable squad car, and offered works of thanks and encouragement for the volunteers and those who were in line to receive the food.

“If we can help put food on someone’s table, and give them one less thing to worry about, then we’ve done our job,” Collins said in his address to volunteers.

At 8:56 a.m., a yellow Toyota sedan pulled up, the first vehicle in line, and volunteers began stocking flour, cooking oil, canned goods, chicken and turkeys inside cardboard boxes that had been placed in the trunks and pickup truck beds in an assembly line fashion.

“I like the setup this year, too,” Randy said. “I like this. Typically they would box (the food) at H-E-B or at a school, and we would go deliver it. So (Collins) would have trucks everywhere and everyone comes and has a station. It seems like it’s going pretty good, too.”

Collins said he considered doing pop-up deliveries within various Fort Bend County cities to ensure the entire inventory of food went to use, but decided on utilizing the logistical infrastructure and volunteers already on hand at Smart Financial Centre to feed the additional crowd that turned out beyond the 200 families who had registered online.

“What we were planning to do was have 200 families show up (in their cars),” Collins said. “And then to go in a truck and deliver (the rest of the food) into the inner cities. But because we had an overflow, the 100 families that we were going to (serve) in the inner city, we’re going to just stay here (and serve them).”

Some volunteers who were working closely with Collins to organize the food giveaway said the group could build off of the success of the partnership with Smart Financial Centre and potentially do a similar event next year at Houston’s NRG Stadium, scaled up to feed 10,000 families.

For those in need or those who are looking to donate or volunteer during the holiday season post-Thanksgiving, the Ismaili Council for the Southwestern U.S. and the Fort Bend Interfaith Community are set to host the annual ABC13 Houston Share Your Holidays Food Drive at the Ismaili Jamatkhana and Center in Sugar Land from 8 a.m.-2 p.m. Dec. 4. The food collected will benefit the East Fort Bend Human Needs Ministry.