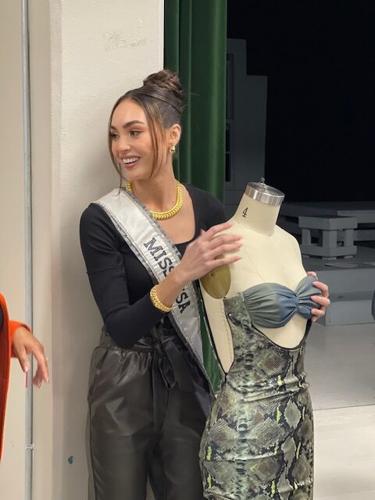 R'Bonney Gabriel, Miss USA, primps one of her own fashion designs before her presentation at Quail Valley Middle School. 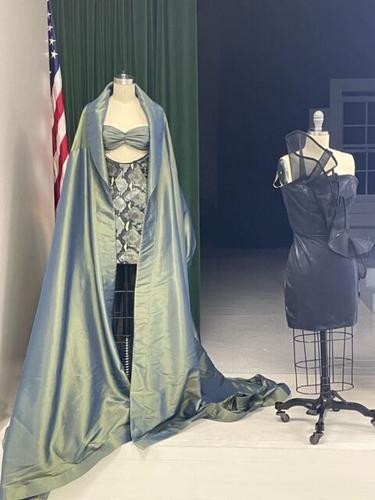 Two of R'Bonney Gabriel's fashion designs, which she wore in her beauty pageant competitions. 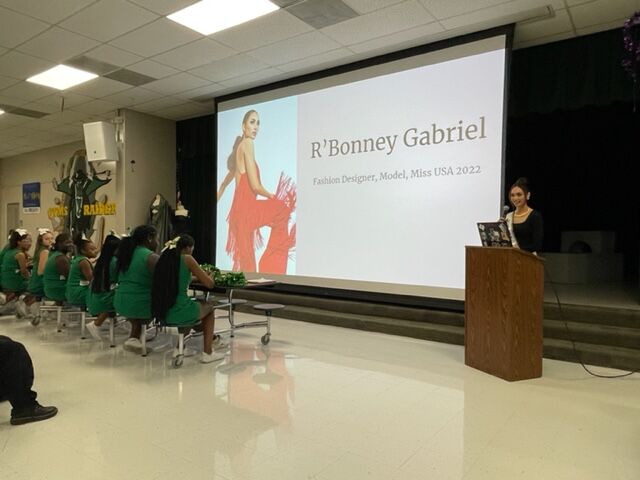 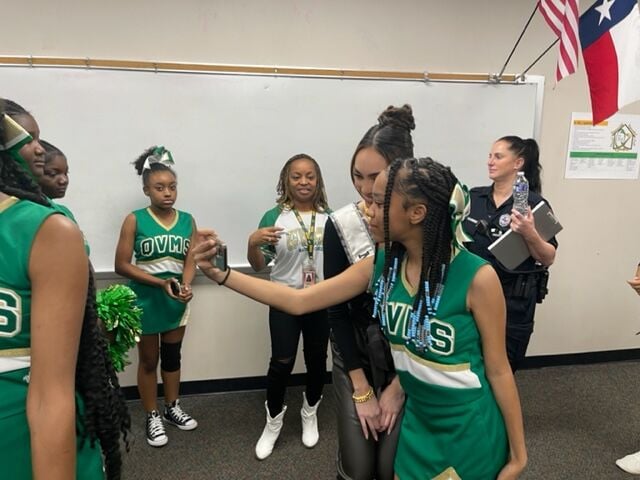 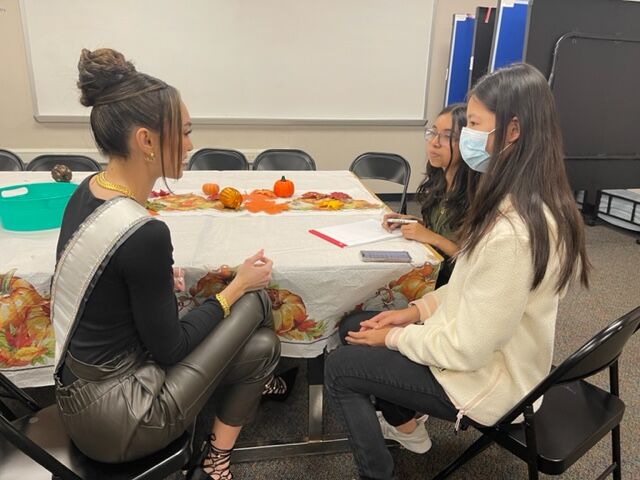 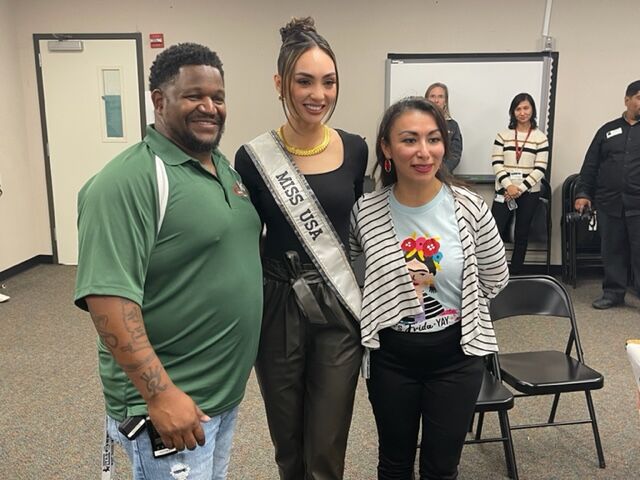 R'Bonney Gabriel, Miss USA, primps one of her own fashion designs before her presentation at Quail Valley Middle School.

Two of R'Bonney Gabriel's fashion designs, which she wore in her beauty pageant competitions.

R'Bonney Gabriel, the newly crowned Miss USA, returned to her Missouri City roots Friday and delighted scores of eighth-grade girls with a message of empowerment and pursuing their dreams at Quail Valley Middle School.

Gabriel became the first Filipino-American to hold the Miss USA title when she won the competition in Reno, Nevada in October. She grew up in Missouri City and attended Lake Olympia Middle School and Elkins High School. In January, she will represent the United States in the Miss Universe pageant in New Orleans.

"I'm a Mo City girl, y'all," Gabriel said in her best Texas twang, to the appreciative screams of the students during a special assembly in the school's cafeteria, which doubles as an auditorium.

Gabriel visited the school at the invitation of its KICKSTART instructor Dana Pettman, who taught her in the same karate program at Lake Oympia. Throughout the presentation, Pettman beamed as he advanced the slide presentation behind her.

Speaking with an infectious teenage argot geared for her young audience, Gabriel said she grew up always trying out new things that interested her, whether she excelled at them or not. Among those were playing volleyball for four years, playing clarinet in band, tennis, and serving on the yearbook.

"I applied myself to all of the things that made me excited," she said. "It's all about giving things a try."

Even though she wasn't always successful, she said, she was always proud that she made the attempt and kept trying new things.

In high school, Gabriel became interested in fashion design. She was preparing to enter her first design competition at age 17 when her then-boyfriend broke up with her.

"He dumped me, y'all," she said, as the girls reacted in shocked disbelief and empathy.

Gabriel said she felt like dropping out of the competition, but her mother convinced her that she should go through with it. She did, and won the "Most Creative" award. She also met a talent scout who recruited her to pursue a modeling career.

Gabriel, now 28, said she got a late start in the beauty pageant world, entering the Miss Kemah competition in 2020, where she placed among the top five runners-up. She would go on to the Miss Texas USA 2021 competition, where she was named first runner-up.

Although saddened at not taking the title, Gabriel said that didn't deter her from pursuing her goal. She told the students that one of her favorite quotations is "Failure is life's way of directing you to another opportunity."

In 2022, she entered the Miss Texas USA competition again, and ultimately took the title in early October, paving the way to her Miss USA crown.

Gabriel has continued her passion for fashion, and now works at the Houston-based design house Magpies & Peacocks, which specializes in using up-cycled and recycled materials. Along the way, Gabriel has also pursued a modeling career, and was recently featured in a photo shoot for Vouge magazine.

None of this would have happened, Garbriel told her young audience, if she had let setbacks prevent her from pursuing her dreams. She urged the students to find their own "superpower" -- the thing they are most interested in -- and never giving up on achieving their goals.

"I think it is so important that you show the world what your talent is," she said.

After the main presentation, Gabriel met with several students in a smaller classroom, including the school's cheerleading squad, and gave an interview to two students from the Raider Roundup, a student-driven school newsletter.