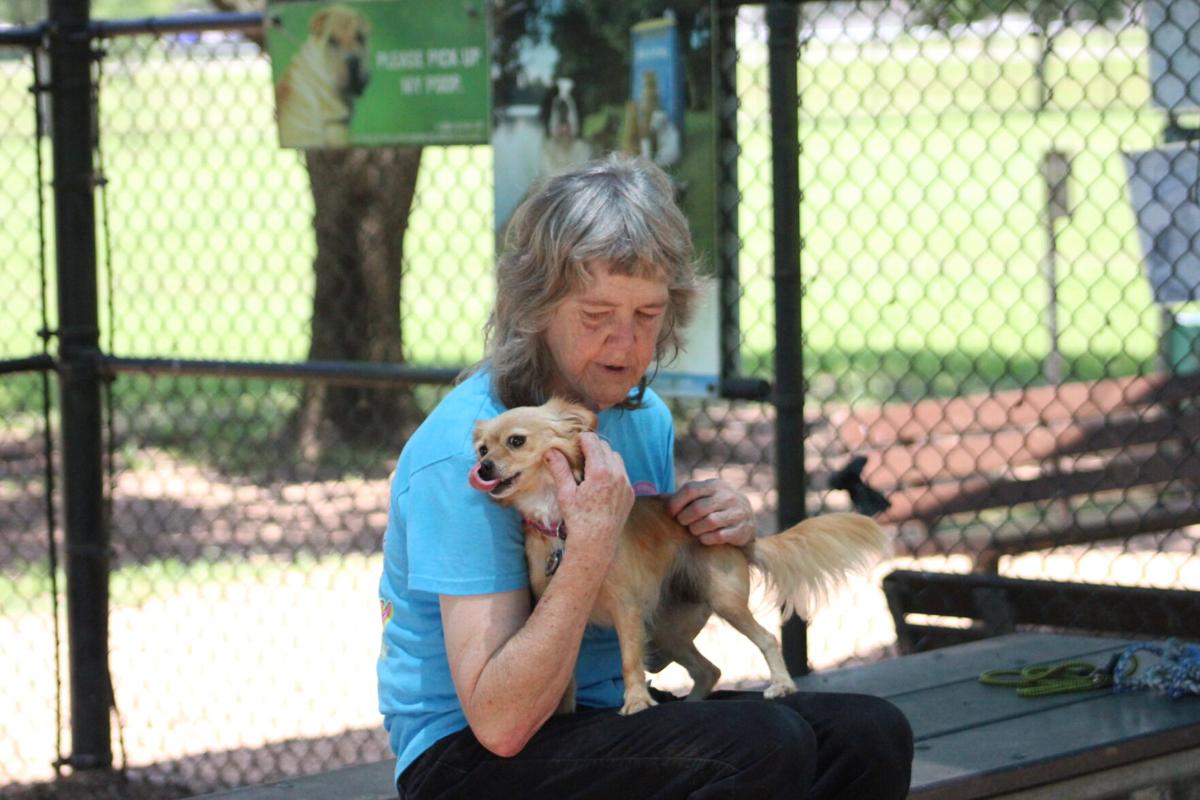 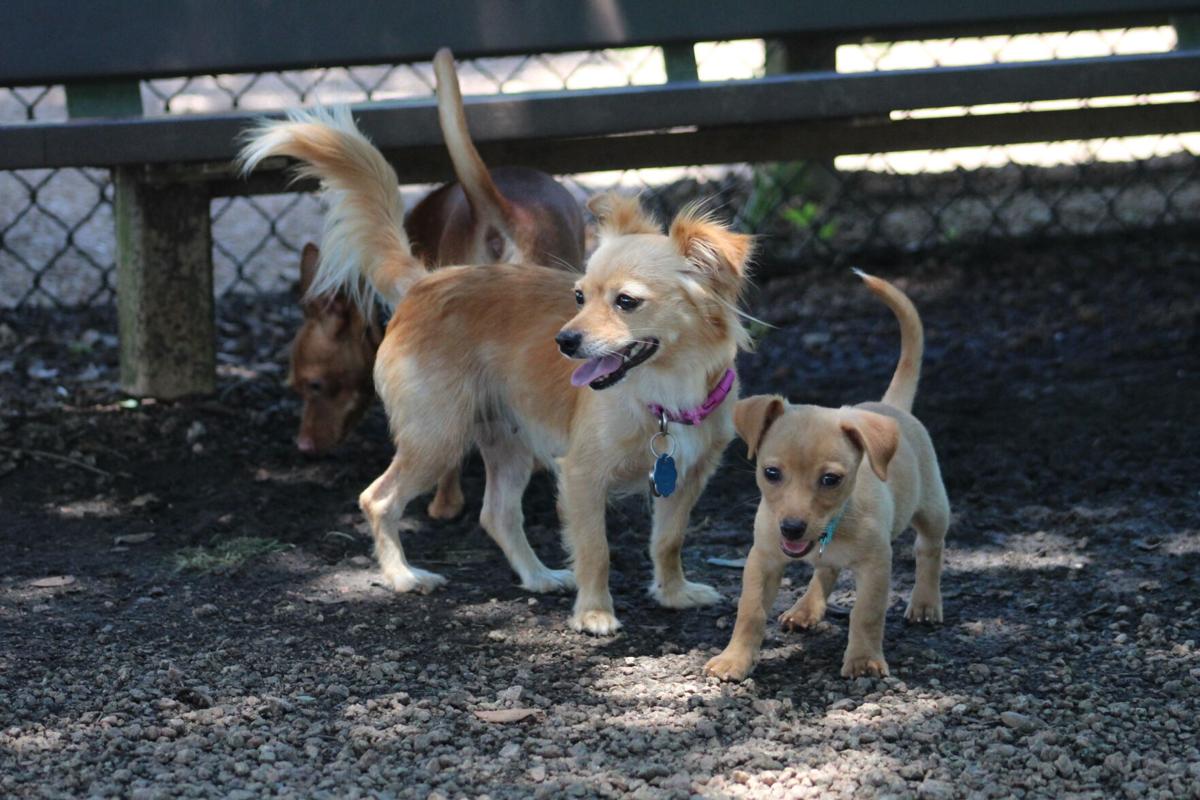 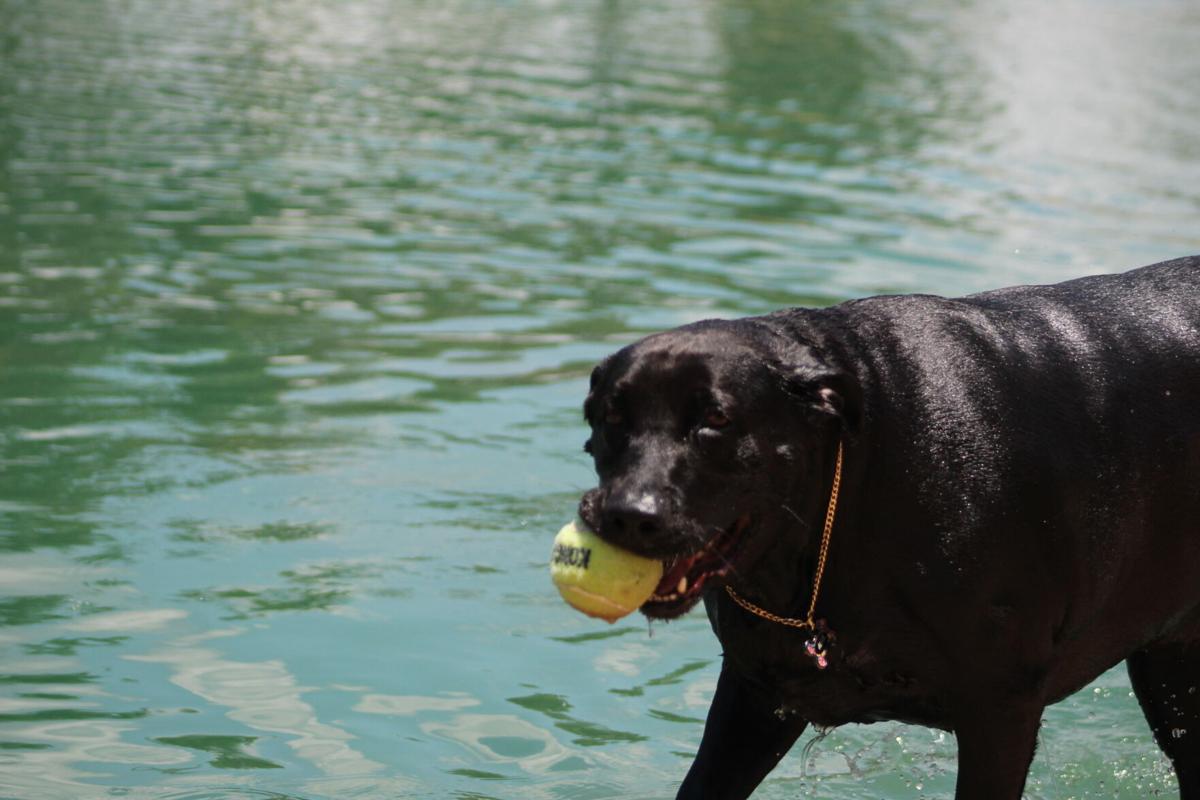 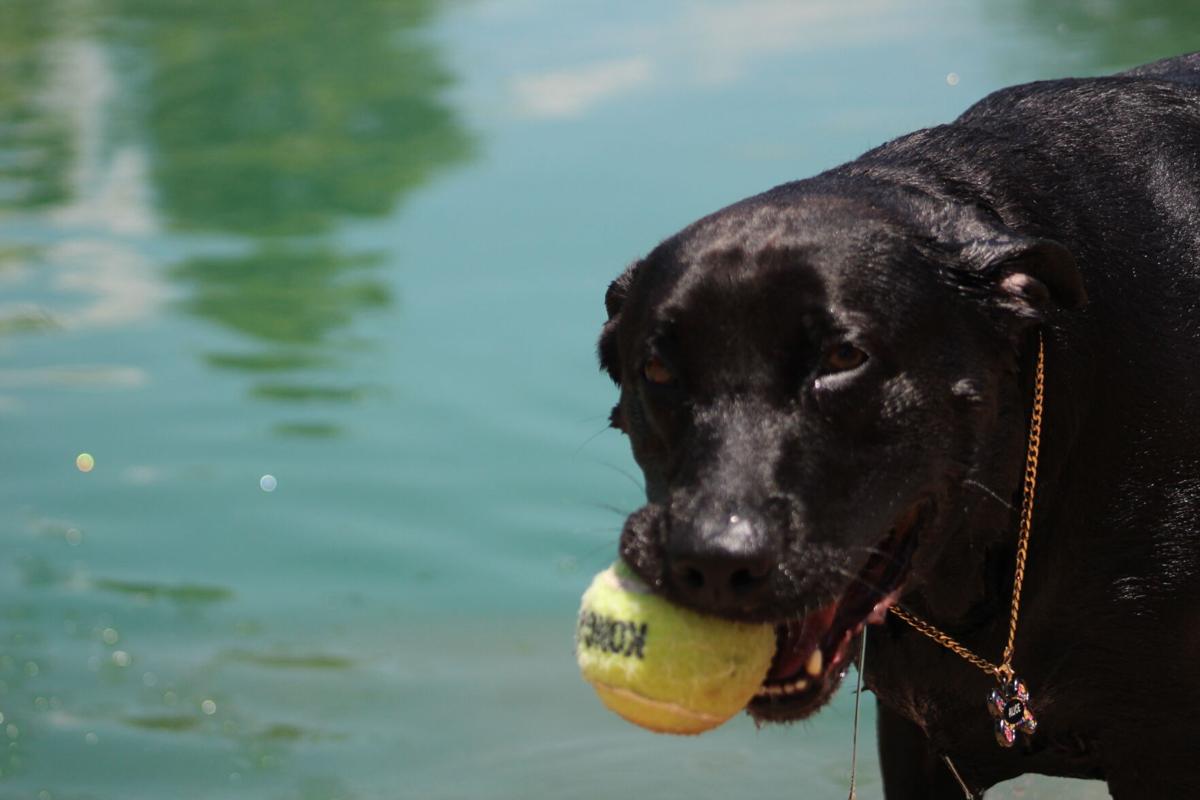 Heliao Man's black lab named Eagle holds a tennis ball in his mouth while playing in the dog pond at Pawm Springs. (Photo by Stefan Modrich 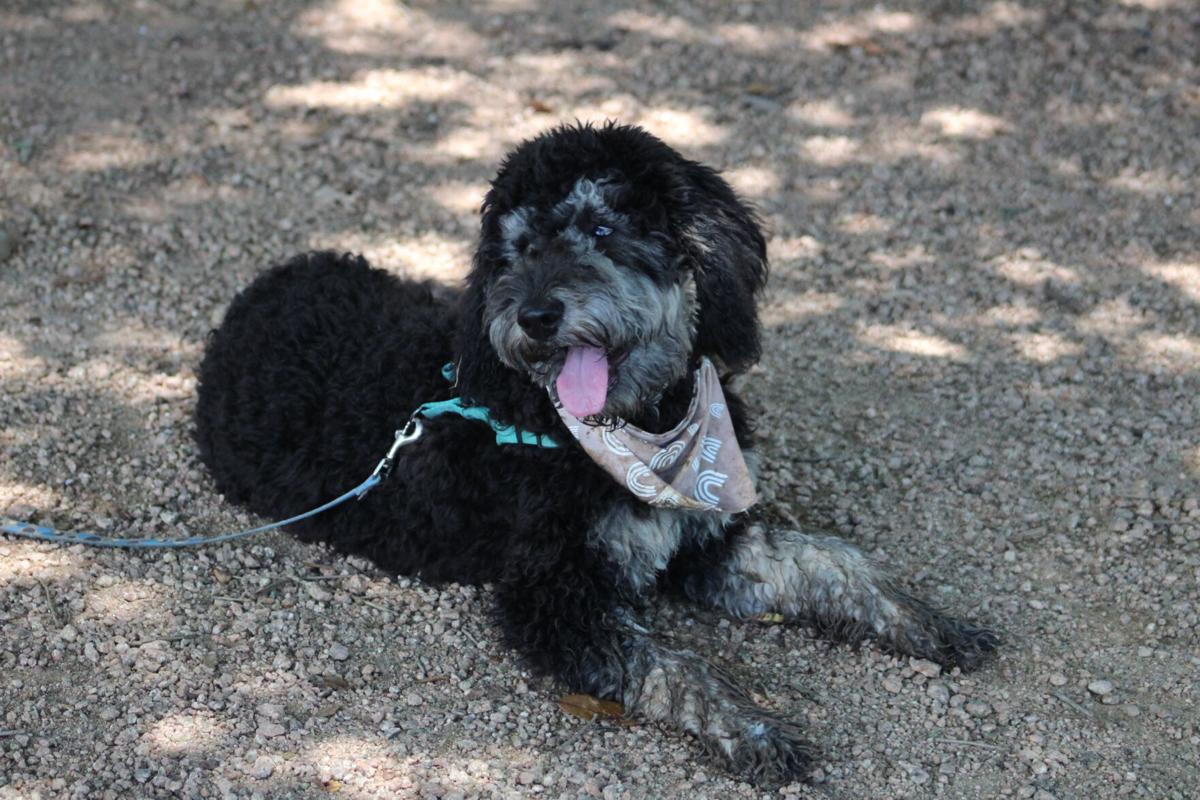 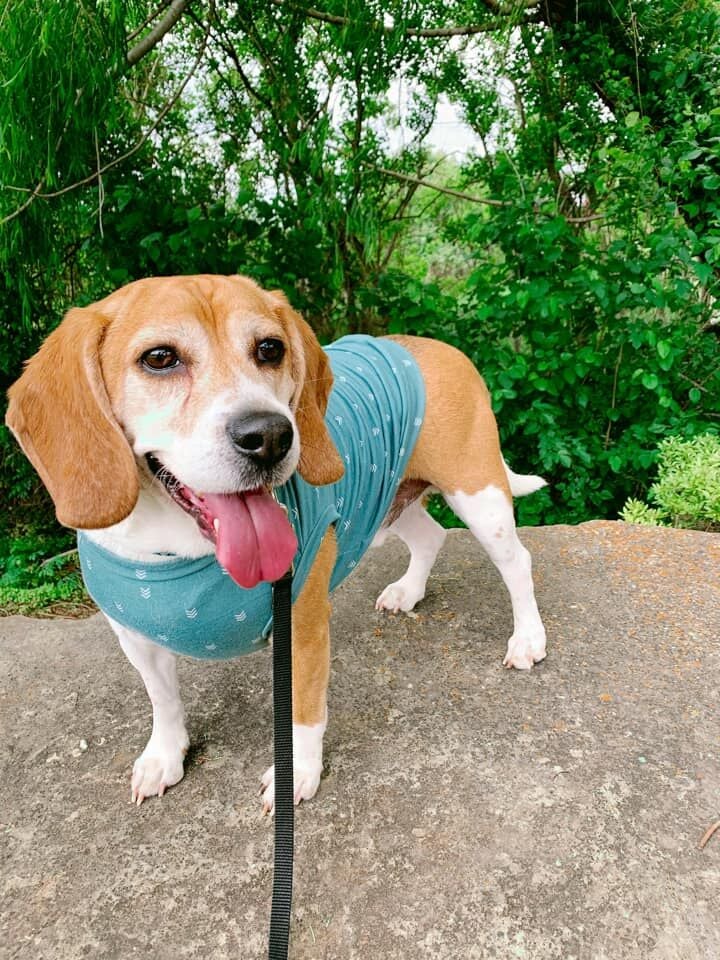 Heliao Man's black lab named Eagle holds a tennis ball in his mouth while playing in the dog pond at Pawm Springs. (Photo by Stefan Modrich

With the summer heat intensifying with each passing day, it’s surely going to be tempting for those of you who have dogs to want to let them lounge with you in the comfort of your air-conditioned home.

But it’s more enjoyable to get outside and explore, especially for your canine companion, and there are ways to do so safely.

I reached out to several neighborhood groups across Fort Bend County, and the overwhelming majority of residents in Sugar Land, Stafford and Missouri City told me they frequent the Pawm Springs Dog Park near Sugar Land Memorial Park at 15300 University Blvd.

So I headed out there, and even on a 93-degree Friday afternoon, I saw several people with dogs of various breeds and sizes soaking up the sun.

The first person I came across was longtime Sugar Land resident Sandy Swofford and her dog, Milo.

“As a puppy, it’s really good for his socialization,” Swofford said. “He likes the freedom of going out and running with other dogs. I really like this community because they have a smaller dog (park) here, and a larger one, so if you don’t want your dog playing with larger dogs, you have another place to go.”

As Swofford mentioned, the 6-acre park has a separate, enclosed area designed for smaller dogs. The city considers “small” dogs to be those weighing no more than 20 pounds. Pawm Springs also has a pond, water spray feature and shaded pavilion with seating.

It is open from dawn to dusk Tuesday-Sunday.

Some important things to know before heading out: The City of Sugar Land’s list of rules and regulations note that dog owners are responsible for cleaning up after their own dogs, and owners should carry a leash at all times, as well as a copy of their dog’s rabies vaccination certificate.

“I find that the people who bring their dogs here have well-socially trained animals,” Swofford said. “I’ve been coming more often with Milo, about three times a week, and it’s been nice to have a community of people here to get to know.”

The Fort Bend County Animal Services (FBCAS) website has some helpful reminders about responsible pet ownership, including being aware of weather and climate conditions indoors and outdoors and keeping your dog’s vaccinations up to date.

Other keys from FBCAS to being a good steward of the dog in your life are taking the time to properly train it and socialize it among other dogs. FBCAS recommends walking dogs on a leash, and that any off-leash activities should be done in a secure, fenced area.

Microchipping, or at minimum, having an ID tag for your dog in the event it is lost, is crucial to giving your dog the best chance of being found and returned to you, FBCAS advises.

Heliao Man, who moved to Sugar Land from Florida two years ago, said he’s glad he found a place for his black labrador, Eagle, and his female companion, a dog named Alice whom Man said he adopted.

“I just searched it up (online) and I decided to come check it out,” Man said. “People are nice here. Texas is friendly.”

New Territory resident Vanessa Villa said she loves to bring her dog on Sundays when there are lots of other dogs to play with.

Stafford resident Estefani Guerra wrote on Facebook that she likes to take her dog to the Texas Direct Auto Dog Park in Meadows Place. Others wrote to me recommending bars and restaurants like Missouri City’s Texas Leaguer Brewing Company, Flying Saucer in Sugar Land Town Square, Live Oak Grill and Dumar’s Mediterranean Restaurant in Sugar Land as places where dogs are welcomed.

Samantha Rodriguez, also of Stafford, said she likes to take Flash, her beagle, on walks at Sugar Land’s Cullinan Park and along the trails near Constellation Field.

Debbie Kaeser, another longtime Sugar Land resident, brought her three chihuahuas — Tucker, Mia and their yet-to-be-named offspring, who she’s calling  “Happy” until she can find someone who will adopt him.

“They know what the dog park is, and they go and get their leash and bring it to me,” Kaeser said. “This was the first time Happy was on a leash, and he did pretty well.”