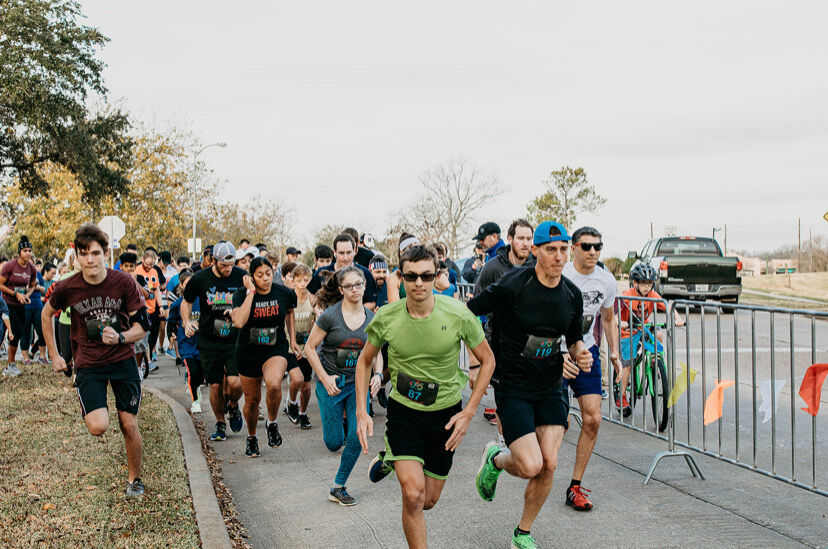 Runners take off during last year’s The Thankful Ones Turkey Trot 5K run in Richmond. This year’s event will still take place as scheduled on Thursday, Nov. 26 despite the COVID-19 pandemic, with plans to socially distance and distribute masks to all participants. (Contributed photo) 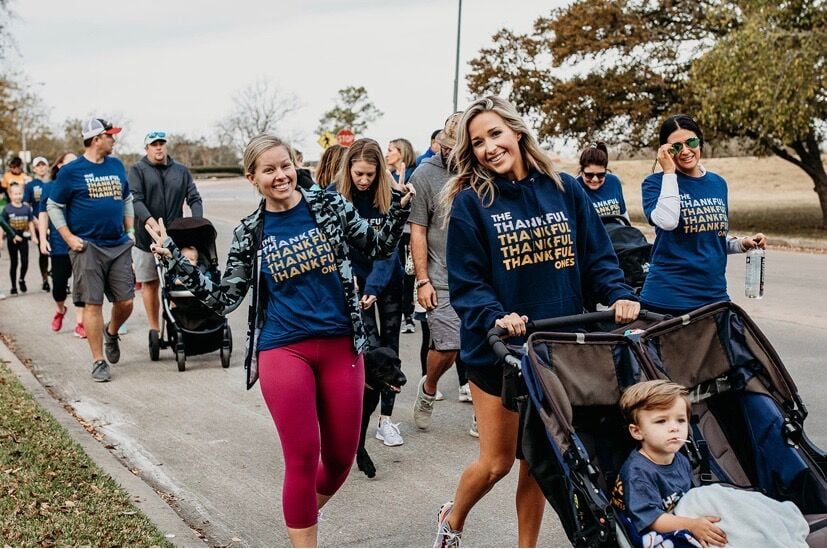 Runners smile for the camera as they take part in last year’s The Thankful Ones 5K in Pecan Grove. (Contributed photo)

This year’s The Thankful Ones Turkey Trot in Pecan Grove will look different. But founder Matthew Martin is eager to try to make the event safe for all involved as he and his nonprofit strive to aid in the adoption of children whose parents have been afflicted by addiction or substance abuse.

Nonprofits large and small across Fort Bend County and beyond have been severely impacted by COVID-19. But the effects of the pandemic have reached far beyond 5K and fun-run races.

The third annual Thanksgiving Day race is a significant part of the organization’s presence in the community. The cost is $25 per adult and $5 for children, and this year a portion of the proceeds from the event will go to Child Advocates of Fort Bend (CAFB). The mission of CAFB is to “provide a voice, heal the hurt, and break the cycle of abuse and neglect for children in Fort Bend County.”

After meeting with other children-oriented nonprofit organizations like CAFB over the summer following a period of shelter-in-place orders in the spring, Martin said he was inspired to take action. He said the first people to report an instance of abuse or neglect often come from the community in which a child interacts: their school, their church or myriad extracurricular activities.

“They basically told me that they had never seen their facility as quiet as it had been,” Martin said. “And that was disturbing because when children are being abused, neglected, sexually or physically (assaulted), most of the time the initial alert comes from someone outside of the home.”

He toured a new CAFB call center during the summer.

“They basically said their phones didn’t ring from March all the way up through May,” Martin said.

Martin added that CAFB started to see an increase in calls “on a limited basis” after Texas Gov. Greg Abbott announced the second phase of his plan to reopen businesses on May 18.

If, for example, a teacher reported to the state’s hotline that a student may have exhibited signs of abuse or neglect, the call is routed at the county level and then to the local level, or Fort Bend County and then to CAFB, Martin said.

“They (CAFB) are the first line of defense for abused and neglected children in Fort Bend County,” Martin said.

And to Martin, lockdowns have presented a series of unintended consequences to The Thankful Ones and other child advocacy groups whose mission is to protect vulnerable children.

“(I knew that) things were happening to children but no one was there to look out for them when they’re in bad situations,” Martin said. “Children were essentially, in my opinion, being overly neglected by society during this time. I understand the implications for the virus and it being contagious, but when you do things like lock down people and say essentially, ‘Don’t leave your house except to go to the store,’ there’s alternative repercussions that in my opinion weren’t thought out. If (abuses are) happening in a household and the kids have nowhere to go, the situation’s probably not improving.”

Martin founded The Thankful Ones in 2015 after he took in Everly Frances, then 6 years old, due to her parents’ struggle with addiction, according to Martin. Everly is Martin’s cousin, and he said his wife and three biological children welcomed Everly with open arms. On National Adoption Day in November 2018, the Martins officially adopted her following a three-year legal battle.

Everly’s parents were addicted to meth and heroin, Martin said, and that “she was not being taken care of like a 4- or 5-year-old should be.”

“We were constantly worried about her,” he added, “knowing that something could happen to her at any time, because her parents were drug addicts.”

He and his wife found the legal and financial hurdles of adoption were a burden and relied on a support system from family to help them through the process, which was the inspiration for Martin’s initiative to launch The Thankful Ones.

He aims to help prospective foster parents or adopters navigate the court system and to lower the barriers for potential parents by raising awareness of the obstacles.

“These situations aren’t as uncommon as you would think,” Martin said. “From a percentage level, I would hope it’s pretty low. But increasingly, people were telling us stories that were similar to ours. So we saw there was a systemic need to start something and try to give back somehow.”

Eagle Disinfection Group, where Martin is the director of sales, will provide 400 masks just in case they are needed for the Turkey Trot. But he expects many participants to bring their own masks as well.

The company is a distributor for Puradigm, a startup company aiming to try to increase workplace safety and the safety of indoor environments with its purification technology.

Independent testing at the University of Florida’s Biosafety Level 3 lab demonstrated an ability to eliminate up to 99.99 percent of the coronavirus from stainless steel surfaces.

“My goal was not to shut this event down because I didn’t want the pandemic or the virus to shut it down,” Martin said. “There’s no rule to my knowledge that we can’t. People know about it. No one said we can’t.”

Nonetheless, Martin understands the fear and skepticism some may have about spreading the coronavirus, even for an outdoor event.

“We are expecting a bit of a decrease (in participation) this year that’s going to be attributed to what’s going on,” Martin said.

The Thankful Ones have seen a slight decrease in terms of the dollar amount given from its donor base, but not the number of donations made, he said.

While there is a virtual run option available, Martin said his supporters have shown a willingness to participate in person. The event has grown from around 100 people in its first year and showed steady growth with the number of registrants each year. But he said he expects about 200 participants this year.

“I feel like us moving forward with it is going to get us more recognition and awareness for our mission and for the children in the county,” Martin said. “Now if there’s an outbreak and the county shuts everything down, I won’t be happy, but at least we took it as far as we could, we kept getting the word out and kept doing what we do.”

He said he often fields questions about pets and strollers and scooters from parents and prospective runners. They are all welcome, he said, as long as the competitive runners are able to safely start at the front.

The 5K race begins at 8 a.m., immediately followed by the 1-mile race. Registration and same-day signup begins at 7 a.m. The race will be held at 2438 Windmill Dr. in Richmond, and participants are asked to park in the Randall’s parking lot at 1890 FM 359.