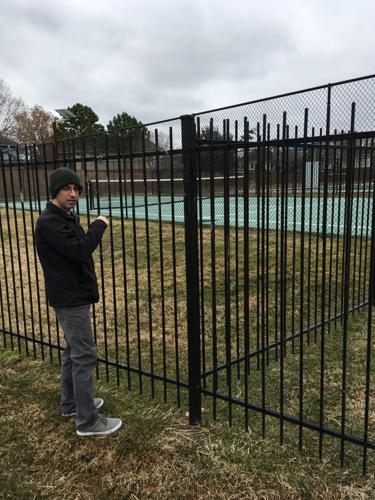 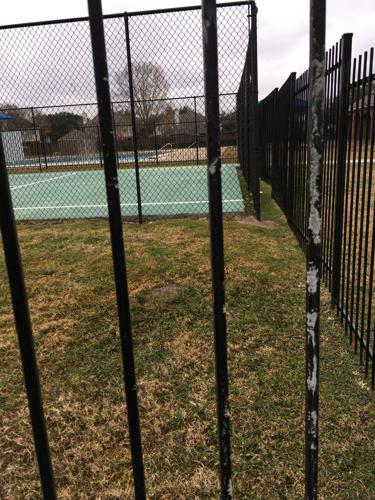 A new tennis court finished last year in Stafford’s Promenade subdivision has a group of residents questioning their local homeowners association, asking who’s to blame for designing a court that is too small to use.

Essentially, the fence around the area runs so close to the baselines of the court that there’s no room to serve, said George Balias, a Stafford resident.

“Normally, I wouldn’t think anything of it, but my wife and I like to play tennis,” he said. “Once it was complete, we took a trip there, and realized it was completely unusable as a tennis court. The slab is too small, and there’s fencing where the lines should be. It’s not constructed properly.”

As Balias and other residents began to ask questions about the tennis court – including specifics about the contract signed to build it, who built it, what the design dimensions were, etc. – they had trouble getting quick responses from the management company charged with overseeing the association, they said.

“During the tennis court process, did anyone from the board or Sterling ASI visit the construction site?” asked Constantine ‘Costa’ Thanos, in an email to the association’s board and management company that was provided to the Star. “Please advise.”

As of Monday afternoon, representatives for the management company, Houston-based Sterling ASI, had not responded to more than five emails and three phone calls over a weeklong period seeking comment about the ongoing dispute.

In the mind of Balias and other residents, the issue is figuring out who is to blame and who can fix the tennis courts to be usable, or return to residents the money spent to build it, Balias said.

“An HOA is a membership association,” he said. “Homeowners have a right to see and understand what’s happening, and audit the decisions.”

Balias in an interview with the Fort Bend Star said he suspects the management agency argues they fulfilled the request when they turned over the three documents, but Balias argues the documents are insufficient.

One of the three documents is a certificate of insurance for a contractor; a second document is an unsigned contract between the management company and a second contractor that mentions the cost of the tennis court will be about $75,000 – made in two separate $37,500 payments at the start and end of construction, according to documents provided to the Star.

The final document includes basic information about the court’s design, such as mentioning that the baseline will be about 10.5 meters wide, and that it will have an 8-feet tall fence, according to the document.

“Here is the items you requested,” wrote Bernita Armstrong, general manager for Sterling Association Services Inc. in an email to Balias that included the documents.

Balias said he followed up after receiving the email, explaining several of his requests hadn’t been answered.

After trading several more emails, association administrators eventually told Balias the contractor was going back to the site to look at the court and would fix any problems in a few weeks, he said.

But when Balias requested all documents connected to that visit, or an update on the visit, Armstrong wrote the board would take care of the matter, but didn’t provide any documents, according to the emails.

On a recent visit to the site, the gates to the tennis court were locked, and Balias still doesn’t know what the plan is to fix the courts, he said.

Sutton declined to weigh into the specifics of the Stafford case, but explained that homeowners associations in Texas are bound to behave like any other nonprofit organization.

This means that they are legally bound not to misuse funds or spend money beyond their scope of authority, he said.

If, for instance, contractors build something poorly within the association, it’s up to the director to legally pursue the contractor to fix the problem, Sutton said.

It’s also important to recognize that individual members of the board won’t typically be held liable for a bad decision, he said.

“Nonprofits make mistakes all the time, but they won’t always be personally liable,” Sutton said.

Balias said he pays about $600 annually in dues to the HOA. Regarding the tennis court that was constructed, he and other residents have reached the point where they just want answers.

“This all started because I happened to want to use the tennis court,” he said. “It feels like we’re peeling back the layers of an onion.”

Yes, Congressman. That is the goal. Still there is no accountability on their end. We have over 42 homes that have signed a petition for removal of the HOA board. There is a MOVEMENT!