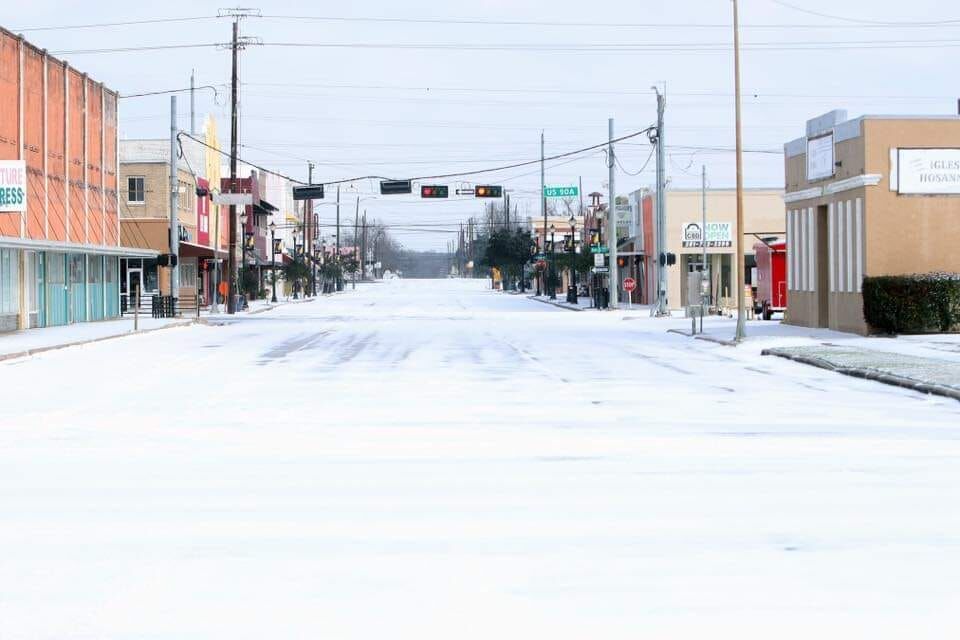 Pictured is a shot of a snow-covered downtown Rosenberg earlier this week. (Contributed photo) 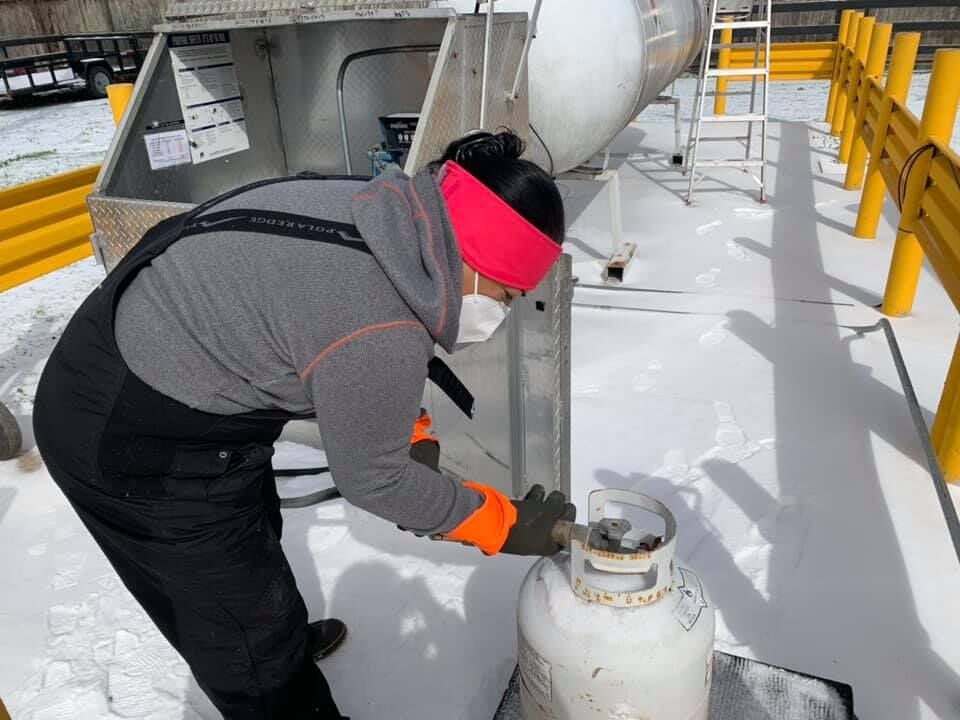 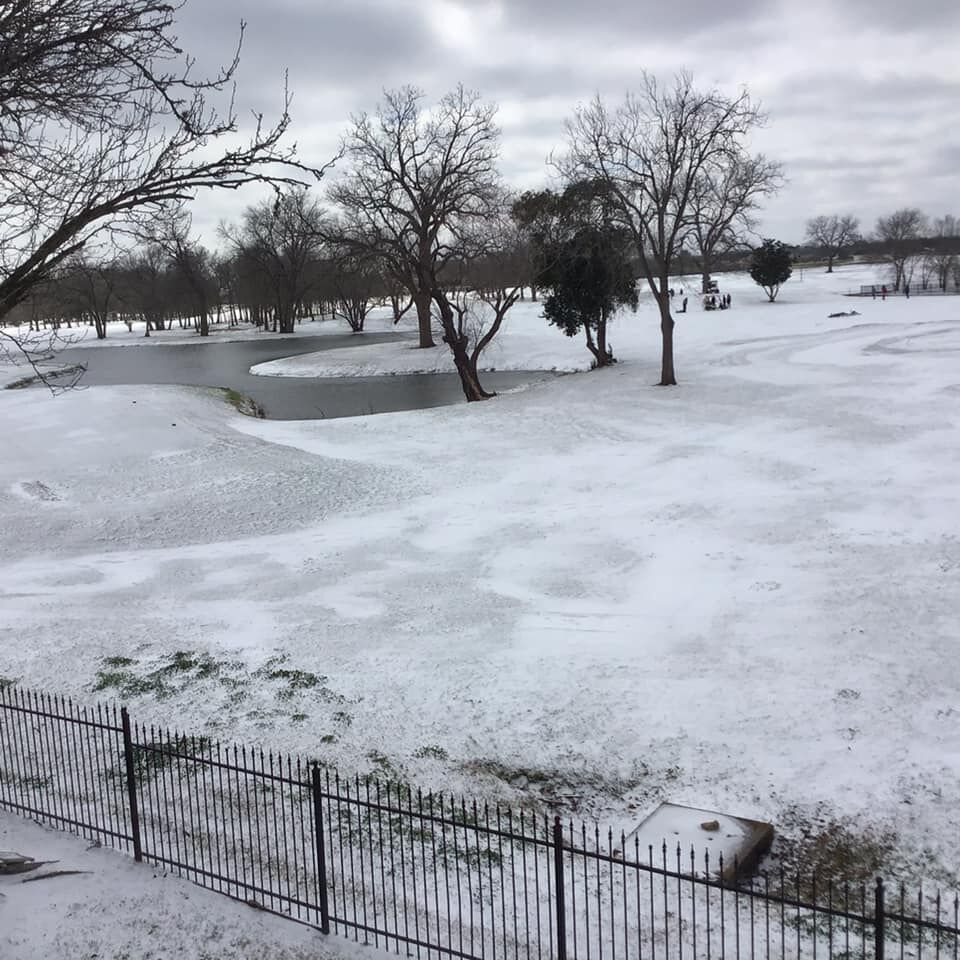 Pictured is the Pecan Grove Country Club and Golf Course after Winter Storm Uri brought snow to the Houston area. 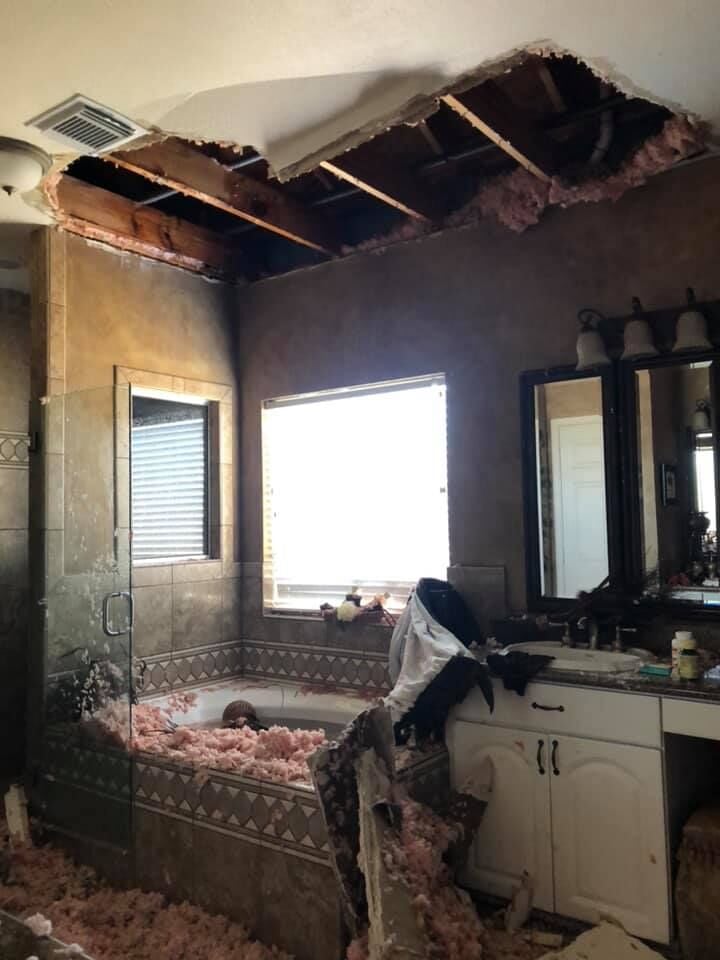 A water pipe burst and the ceiling collapsed in the bathroom inside the home of Cheri Payne on Tuesday in Missouri City. (Contributed photo/Facebook)

Pictured is a shot of a snow-covered downtown Rosenberg earlier this week. (Contributed photo)

Pictured is the Pecan Grove Country Club and Golf Course after Winter Storm Uri brought snow to the Houston area.

A water pipe burst and the ceiling collapsed in the bathroom inside the home of Cheri Payne on Tuesday in Missouri City. (Contributed photo/Facebook)

Fort Bend County residents have been hammered by Winter Storm Uri’s below-freezing temperatures and precipitation that began Sunday and continued into Wednesday, leaving more than half of the county without power, County Judge KP George wrote in a tweet Wednesday.

In a Facebook post, George was critical of Texas Gov. Greg Abbott making a television appearance on Fox News and blaming green energy sources for the outage. The Electric Reliability Council of Texas (ERCOT), which manages the flow of electricity for much of the state, said in a news release earlier this week that extreme weather conditions caused generating units “across fuel types” to trip offline and become unavailable.

On Tuesday, Abbott declared reform of ERCOT an emergency item for the current state legislative session and called for an investigation into ERCOT’s handling of the state’s power grid.

“There is unbelievable human suffering right now, while our first responder crews are at stretched capacities. We need solutions,” George wrote. “The state, ERCOT, CenterPoint, etc. knew of the storm yet here we are with zero solutions and zero ETAs. My residents are boiling snow to flush toilets. This is full failed leadership in the energy capital of the world.”

According to CenterPoint Energy’s outage tracker, more than 1.3 million outages have been reported across the Houston area.

From Stafford to as far away as Needville, several Fort Bend residents have been without power since Monday.

Lisa Coudrain, a Kendleton resident, said she’s been without power since 9 p.m. Sunday and without water since Monday afternoon. She said she’s frustrated that CenterPoint’s outage map frequently crashed and wasn’t updating the number of outages as they quickly spread throughout the Houston area.

“I call and they say, ‘We show an outage at your address,’ and they hang up,” Coudrain said. “It’s ridiculous.”

Natasha Ghannad in Richmond’s Creekside Ranch subdivision said she had been without power since 8 a.m. Monday, but returned home after finding warmth and shelter with a neighbor around 11 a.m. Wednesday. She said she’s new to Creekside Ranch, having only lived there for six months.

The other portion of her neighborhood that had maintained power when hers went out eventually lost it as well around 8:30 p.m. Tuesday.

Ghannad, a mother to a 4-year-old and a baby who is 5 months old, said she struggled to find updates on power outages and said her cell service was spotty. She feared for her child because she said she had a freezer full of breastmilk that was beginning to soften.

Roads across the county remain hazardous, local and county officials said. The City of Sugar Land closed the main lanes of Highway 59 and Grand Parkway in both directions in the portions of the highways that run through the city.

In addition to power outages, some residents have been without water, and the following municipalities and Municipal Utility Districts (MUDs) have issued boil water notices, per FBCOEM:

The Texas Commission on Environmental Quality (TCEQ) requires local water providers to notify all customers to boil their water prior to consumption, including for washing of the hands or face, brushing teeth, drinking, or for use in cooking, when water system pressure drops below 20 pounds per square inch.

“To ensure destruction of all harmful bacteria and other microbes, water for drinking, cooking, and ice making should be boiled and cooled prior to use for drinking water or human consumption purposes,” Sugar Land city officials said. “The water should be brought to a vigorous rolling boil and then boiled for two minutes.”

In a video posted to Twitter, Sugar Land Mayor Joe Zimmerman said the city’s surface water treatment plant and all of its groundwater plants are currently on backup power or generators due to the impacts of the power outage.

Zimmerman said the city “has taken action to secure pallets of water” to distribute to residents without power who are unable to boil their tap water.

He said normal water pressure will not return until power is restored.

“Our system was never designed to run solely on back-up power,” Zimmerman said. “Water pressure in most areas is extremely low due to our current situation.”

Residents across the county were frustrated by what they viewed as a lack of transparency in the midst of a crisis, including Missouri City’s Noel Pinnock.

“It is critically important that MUDs inform customers when a water stoppage occurs.” Pinnock said. “So many woke up this morning after taking all the (suggested) precautions to no water and no communication.”