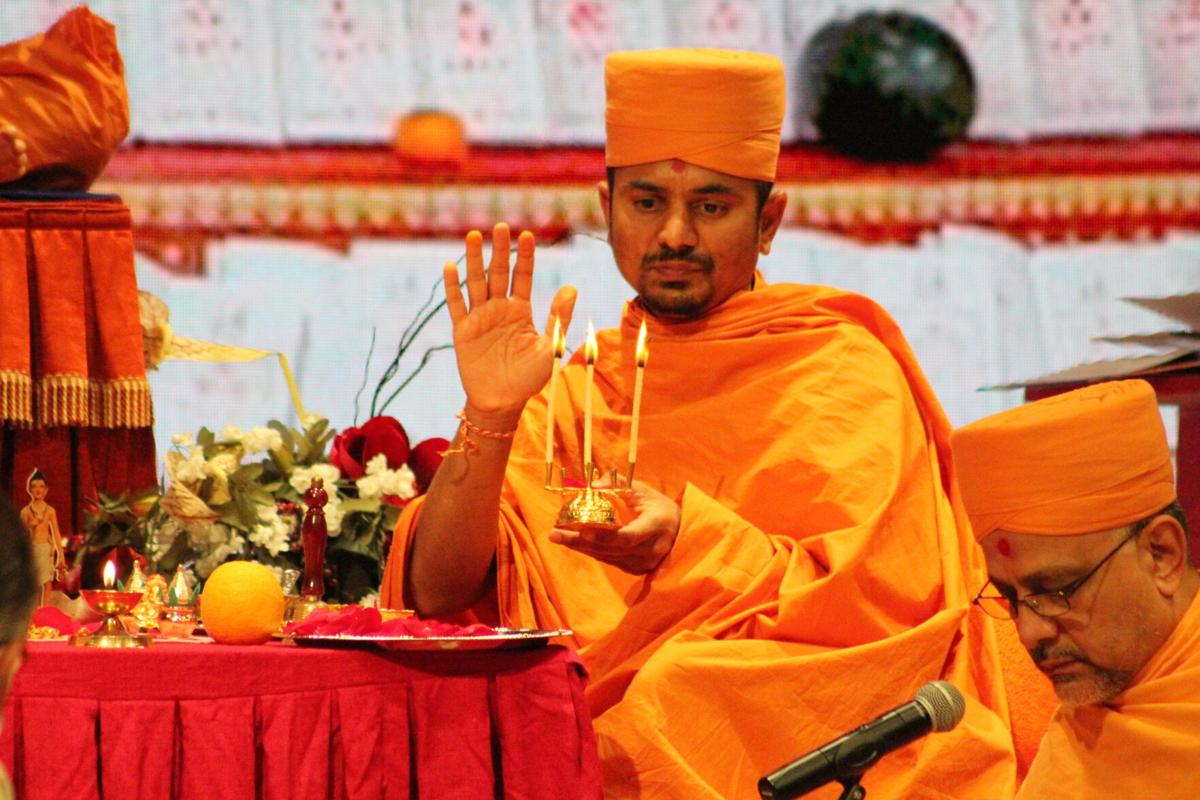 A religious leader participates in the tradition of arti, or lighting candles in recognition of Hindu deities during a Diwali celebration last Thursday at the BAPS Shri Swaminarayan Mandir in Stafford. (Photo by Stefan Modrich) 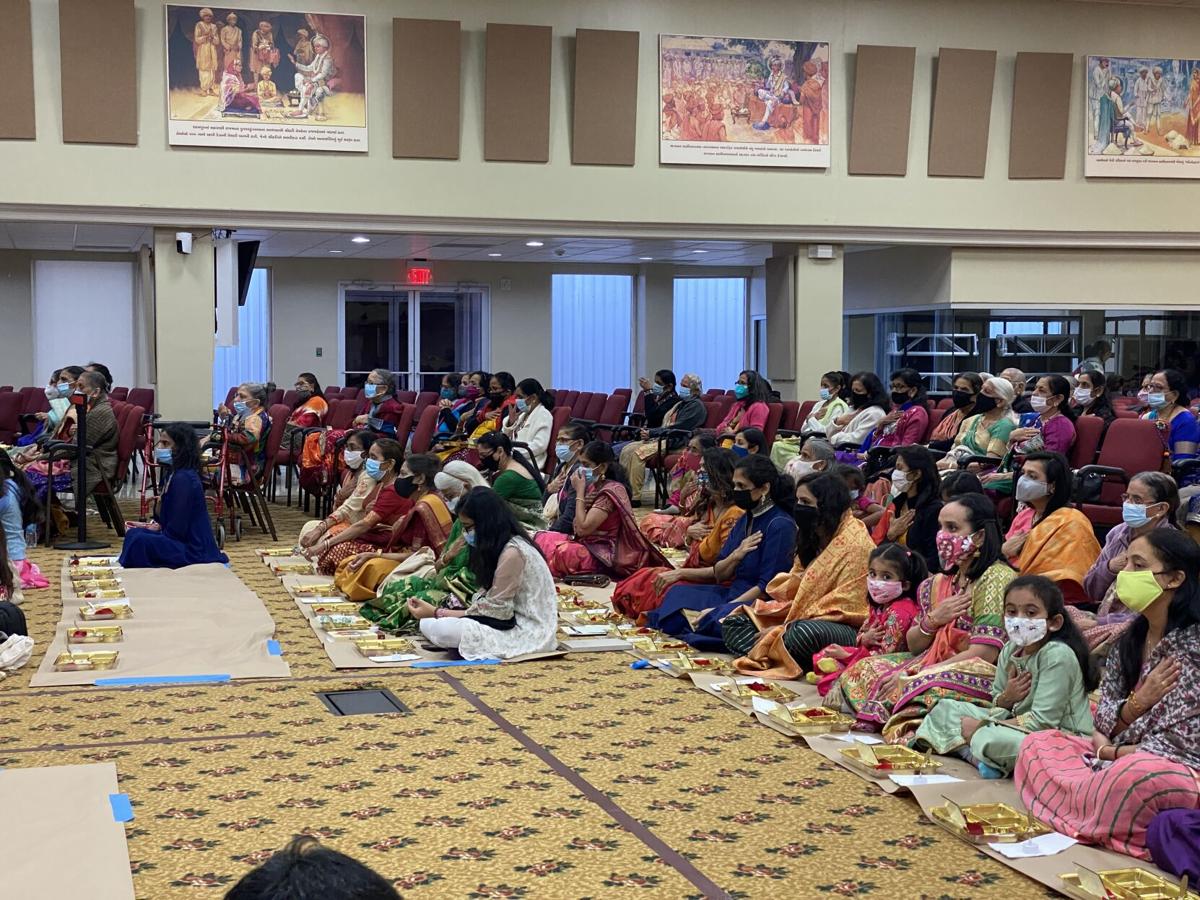 Devotees celebrated Diwali last Thursday at the BAPS Shri Swaminarayan Mandir in Stafford by gathering indoors for a puja, or prayer. (Photo by Stefan Modrich) 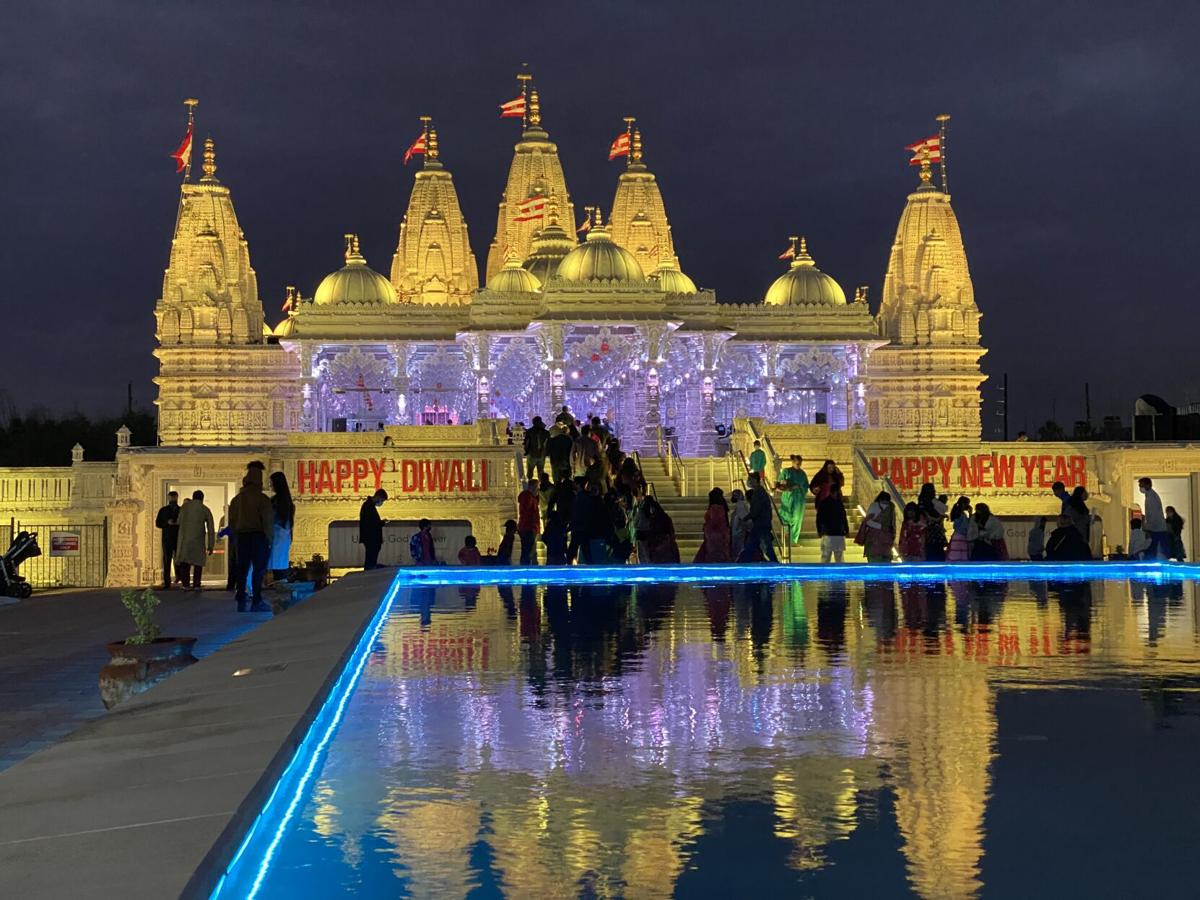 A light show concluded an evening of celebration of Diwali last Thursday at the BAPS Shri Swaminarayan Mandir in Stafford. (Photo by Stefan Modrich)

A religious leader participates in the tradition of arti, or lighting candles in recognition of Hindu deities during a Diwali celebration last Thursday at the BAPS Shri Swaminarayan Mandir in Stafford. (Photo by Stefan Modrich)

Devotees celebrated Diwali last Thursday at the BAPS Shri Swaminarayan Mandir in Stafford by gathering indoors for a puja, or prayer. (Photo by Stefan Modrich)

A light show concluded an evening of celebration of Diwali last Thursday at the BAPS Shri Swaminarayan Mandir in Stafford. (Photo by Stefan Modrich)

Last Thursday, Hindus ventured from across the Houston area and as far away as Austin and Dallas to celebrate Diwali in Stafford.

The BAPS Shri Swaminarayan Mandir, 1150 Brand Lane, is a campus containing a Hindu temple and has served as a spiritual home for Hindus since it opened to the public in 2004 and counts more than 150 families among its devotees.

Viral Desai, an optometrist in Sugar Land and Richmond, explained to me that Diwali, known as the Festival of Lights, is also the commemoration of the Hindu New Year.

Heena Thakkar, a pediatrician who lives in Piney Point Village, said she values the sense of community and fellowship that emanates from the mandir, or Hindu house of worship, especially during Diwali. She has been a devotee of BAPS for 20 years.

“I think it's a very enlightening time of the year,” Thakkar said. “It’s very festive. Most of us come to the mandir to enjoy the good company, the blessings, the prayers and beautiful lights, and people are amazingly hospitable and loving.”

Thakkar also said she was impressed with the mandir’s commitment to COVID-19 safety protocols, with strict adherence among attendees to the masking requirements on campus.

Desai and I sat together as we observed the puja, a traditional Hindu prayer. On this particular occasion, the Hindu community in Fort Bend County gave thanks for the peace and prosperity of the last year while looking ahead to the coming year. Students will pray for academic success and entrepreneurs will seek to maximize their talents to give back to their communities.

During this ceremony, I was marked on my forehead with a cooling sandalwood paste, which is derived from an Indian plant that contains some medicinal properties and is considered sacred to devotees of Hinduism.

Meghal Batt, a Pearland resident and an engineer at Shell in Deer Park, is another devotee of the mandir. He joined me on a walk through the campus, decorated with colorful lanterns and art work emphasizing themes of unity and support for family. We also went on a tour of the Mandir, a majestic marble structure that was painstakingly assembled from 33,000 individual pieces and encased in glass to allow for climate control.

In the evening, many devotees made their way up to the mandir for darshan, or the act of worship in the Hindu tradition. Bhatt said that darshan is about “recognizing the divinity in one another” and forging deeper connections with people in their lives over their shared love of their faith.

The highlight of the evening was a light show, where a stream of multicolored LED lights were projected across the white exterior of the mandir on a cool autumn evening.

Among those watching the show were Twinkle Patel and her son Krish Patel.

Twinkle Patel runs a diagnostics lab where she is conducting COVID-19 tests, she said.

Twinkle Patel said she moved from Gujarat on India’s west coast to a mostly white neighborhood in Pensacola, Florida, where she lived for eight years before settling in Sugar Land in 2013. Her children even attended a Christian school and celebrated Thanksgiving and Christmas.

But she’s grateful now that she has a spiritual home for her family in Fort Bend County.

“One of the main reasons I'm here is so I can cultivate some of the culture, knowledge and wisdom that Hinduism offers,” she said. “But at the same time, being with a more diverse community (allows) our family and kids, especially, to learn more about the global perspective.”

There are some generational differences between how children and their parents view Diwali, but the common thread is an appreciation for family and customs.

Krish Patel,16, attends Westlake Charter School in a suburb of Fort Worth, and made the trip back home to Fort Bend County for the week to reconnect with friends and family for the holiday. He said he hopes to absorb and appreciate every moment of the celebration, especially after the subdued observances of Diwali many had last year because of the COVID-19 pandemic.

“My favorite part about coming here and meeting up with everybody is that you get to experience all the culture and the festivities surrounding Diwali and what the (Hindu) New Year actually is,” he said. “You're supposed to have fun and enjoy what's going on around you.”