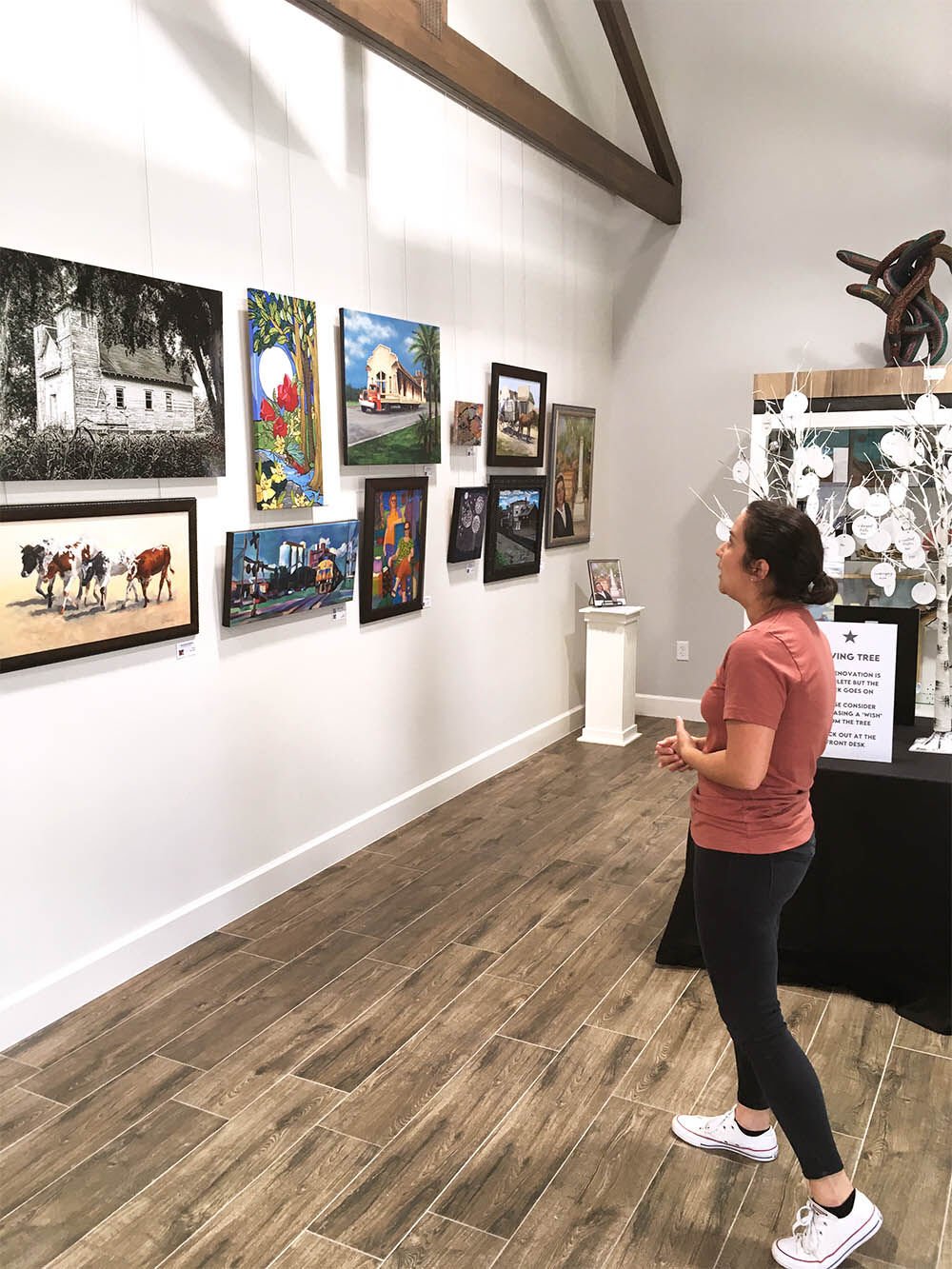 Fort Bend Museum’s Ana Alicia Acosta looks on at public art displayed at the front of the newly-renovated museum. The museum reopened to the public on July 17 after closing for almost six months. (Photo by Matt deGrood) 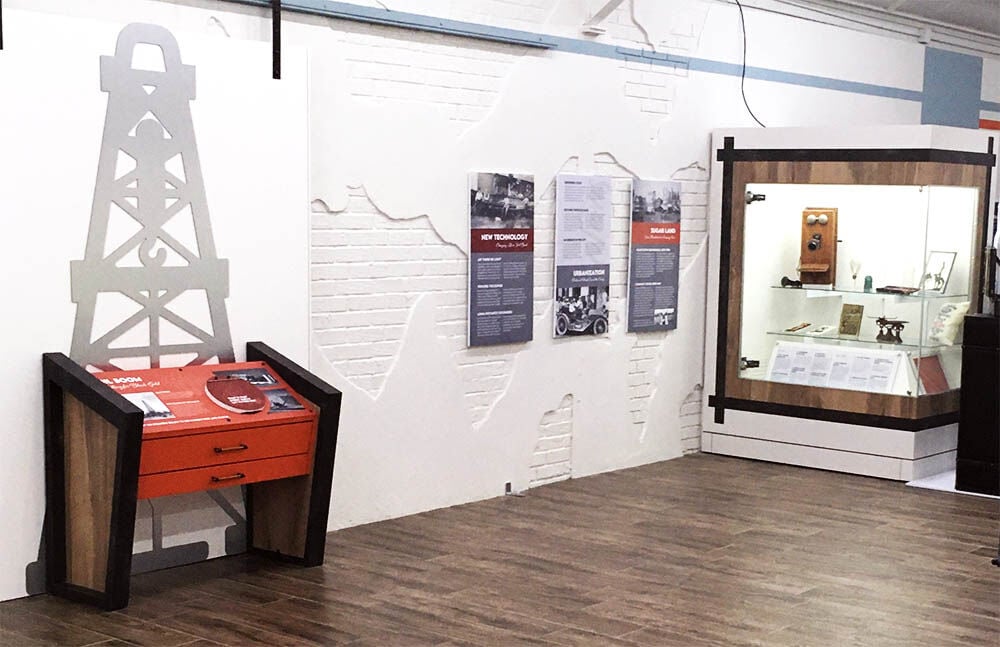 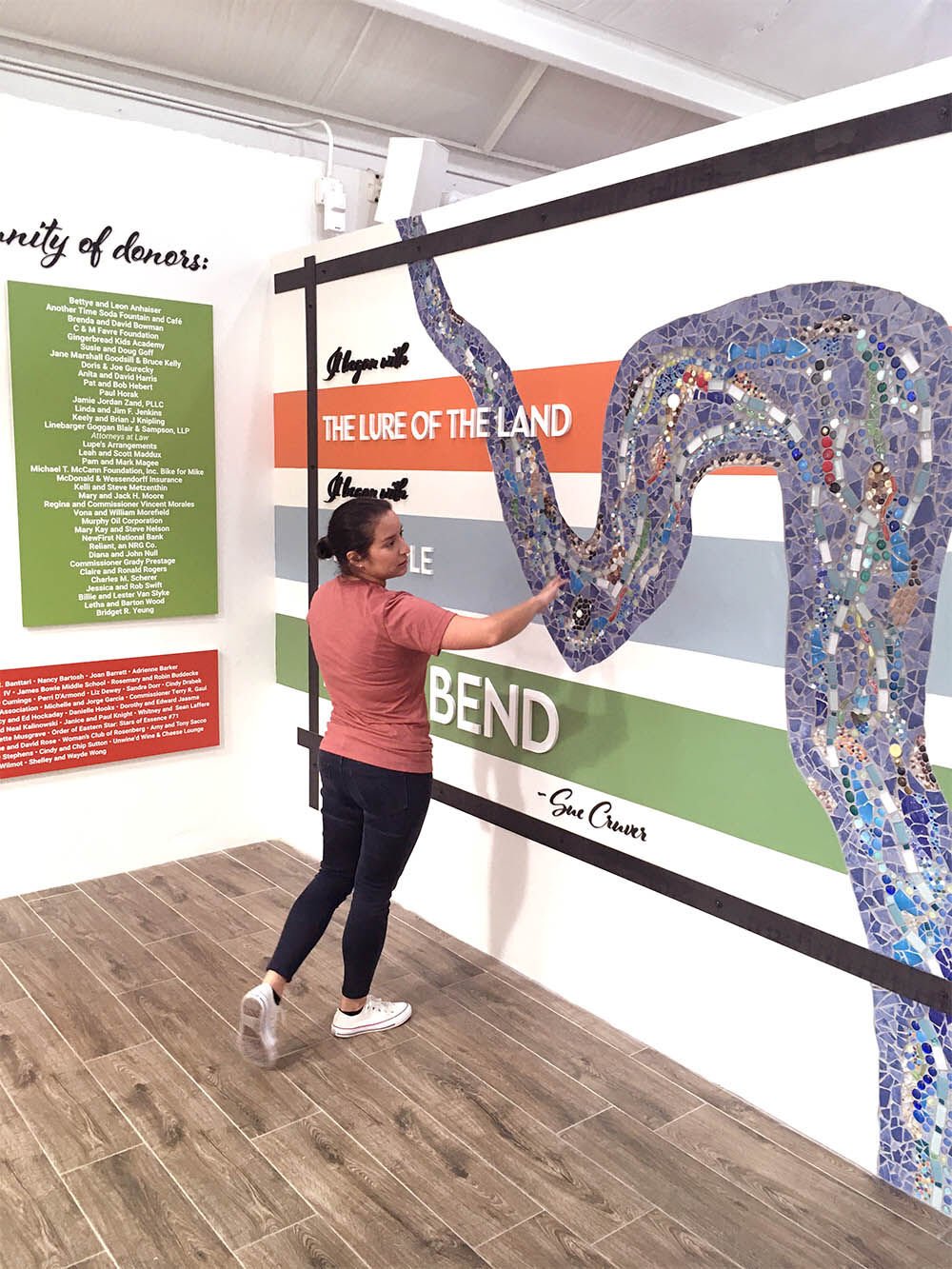 Ana Alicia Acosta shows off one of her favorite parts of the newly-renovated Fort Bend Museum. (Photo by Matt deGrood)

Fort Bend Museum’s Ana Alicia Acosta looks on at public art displayed at the front of the newly-renovated museum. The museum reopened to the public on July 17 after closing for almost six months. (Photo by Matt deGrood)

Ana Alicia Acosta shows off one of her favorite parts of the newly-renovated Fort Bend Museum. (Photo by Matt deGrood)

Even approaching the newly-renovated Fort Bend Museum in Richmond, it’s easy for one to believe they’re about to enter some place in one of the world’s centers of culture – a New York, a Paris, a Tokyo.

A comforting white exterior and glass doors greet visitors on their approach, and the entry is filled with local art and historical trinkets and T-shirts depicting Fort Bend County history.

“This used to be basically a big brick box,” said Claire Rogers, the executive director of the Fort Bend History Association, which oversees the museum.

The museum, 550 Houston St. in Richmond, reopened to the public on July 17 after being closed about six months for $2 million in renovations, according to Fort Bend History Association, which runs the museum.

The facility as it exists today, with its abundance of windows and brightly-lit interior, is a far cry from how it looked before, said Ana Alicia Acosta, the site manager.

The museum’s association began in 1967 and built the facility that housed the museum in 1972, intending it to become a storage collection facility for the nearby Moore Home, Rogers said.

By 1988, the facility had become a museum office that didn’t change much until recently, Rogers said.

Trustees with the history association had contemplated building a dedicated museum elsewhere in the county as the organization celebrated its 50th anniversary in 2017, according to Rogers. But then a fire started in the museum building in April 2018, she said.

The fire wasn’t terrible, but it began in the center of the museum, and the facility at the time had no windows and limited ways to get out, she said.

“We decided that, before we attempted to build bigger and better, we needed to deal with what we already had,” Rogers said. “We wanted to reimagine what could be on the property.”

Now, a renovated interior depicts the story of Fort Bend County, from the first settlers’ arrival to present day.

“One day today will also be part of history,” Acosta said of an exhibit depicting the recent controversy over the Jaybird Monument in Richmond.

The monument stood in Richmond for years, a longstanding reference to a former local political group that disenfranchised Black voters and instituted white-only primaries for voting until 1953.

Because Fort Bend County is so diverse, it’s important that the museum tell the story of everyone, Rogers said. That’s why several exhibits are dedicated to immigrants to the area, she said.

History aficionados in Fort Bend County stand in somewhat stark contrast to communities in other counties surrounding Houston. The $2 million for renovations was funded almost entirely through donations, with a few matching grants, Rogers said.

“Fort Bend County just has such tremendous history,” Rogers said, explaining the high interest in museums in the county. “So much of Texas history started right here.”

The renovation also expanded the size of the facility from 4,000 to about 5,800 square feet, Rogers said.

During the coronavirus pandemic, the museum has seen many fewer visitors than in years past, Acosta said. But with the new renovation and fewer cases of COVID-19 in recent months, she said she hopes people will return.

Before the pandemic, the museum might have seen as many as 18,000 visitors per year, of which some 60 percent were students coming on a field trip, Rogers said.

The renovation was the result of years’ worth of donations, Acosta said.

“This was really a community buy-in,” she said.

The history association still has much work to do in coming years to continue to raise the profile on Fort Bend County history, Rogers said.

The next capital campaign, for instance, will be about raising money to handle the association’s extensive collections, she said. The association has about 70,000 artifacts in the collection, of which some 30,000 are archeology.