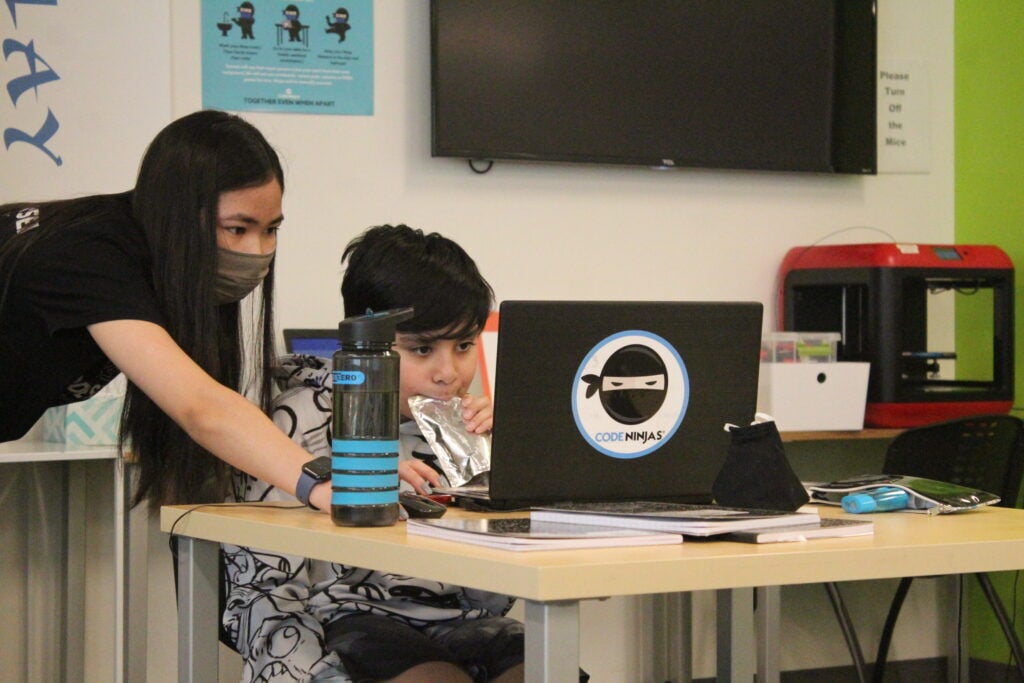 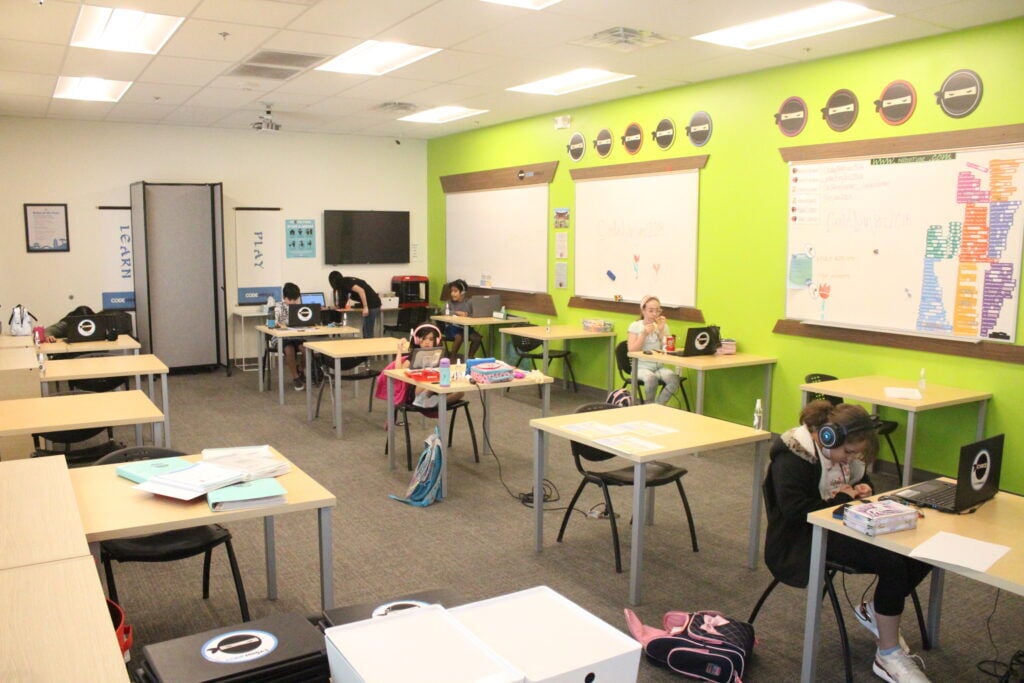 Students participate in virtual learning in the classroom at the Code Ninjas Riverstone location on Friday in Sugar Land. (Photo by Stefan Modrich)

STEM education and the rapidly evolving world of coding and computer programming is becoming an increasingly influential and normal part of children’s everyday lives in Fort Bend County.

Kalika Sinha’s entry into that world, as an experienced architect and construction manager and working mother, was driven by the motivation of finding a way to be there for her son, Ishaan, as he navigates his way through fifth grade at Anne Sullivan Elementary School. She owns the Sugar Land locations of Code Ninjas, which teaches coding to kids.

“My son has ADHD, and we have two dogs at home,” Sinha said. “It’s not a good combination to be at home with all of these distractions. So this is the reason why we’re here. He’s focused, he’s sitting at his desk. OK, we don’t have (in-person) school right now, that option doesn’t exist. This is the next-best thing.”

Abid Abedi, the CEO of iCode, a similar, Dallas-based company with locations across Texas and the U.S., made Missouri City iCode’s first entry into the Houston market.

“Being a parent myself, I’ve struggled with this,” Abedi said. “I have two daughters in college and one in high school. It’s tough. Parents are stressed out. We have work to do.”

Both Abedi and Sinha find themselves to be in ideal roles to be practicing their educational disciplines as problem-solvers during the COVID-19 pandemic, a time when schedules and lives have been uprooted and adaptation has become a necessity.

Code Ninjas has 17 locations in the Houston area, five of which are in Fort Bend County. It has hundreds of locations across the U.S., Canada and the United Kingdom.

Since 2018, when Sinha and her husband became franchisees of Code Ninjas at their Riverstone location in Sugar Land, she has established herself as one of the go-to sources of extracurricular enrichment and activities for children from kindergarten through eighth grade.

She is the manager and developer of three other Code Ninjas locations, including another in Sugar Land that services the communities of Greatwood, Riverpark and New Territory, and another that serves Richmond and Aliana. In 2021, Sinha plans to open a location in Sienna.

The majority of her clients are attending schools in Fort Bend ISD, which began its 2020-21 school year via remote learning on Monday. Other Code Ninjas participants come from Lamar Consolidated ISD and Stafford Municipal School District or are home-schooled.

Code Ninjas is providing the first week of classes free for children whose parents are essential workers.

“We wanted to make sure that they (the parents) can do what they need to do,” Sinha said. “We’re giving it to nurses, doctors, teachers, cops and firefighters.”

Sinha’s children attend FBISD, and she has been a regular donor to the Fort Bend Education Foundation.

As a result, FBISD and Code Ninjas are in sync when it comes to the remote learning curriculum, and Sinha and all of her staff have been trained according to the same manuals and procedures as the district’s teachers.

Sam Madamba, one of Sinha’s staff members, is a computer science student at Wharton County Junior College on the University of Houston-Sugar Land campus. She has worked with Code Ninjas for 11 months.

Sinha said she treats high school and college student employees as professionals and hopes to set them up to be the next generation’s innovators and STEM leaders.

Madamba said she has learned how to better articulate her problem-solving process by working with children.

“I’ve always had a tough time explaining to someone why I’m thinking (a certain) way,” Madamba said. “And helping them learn how I did it in a simple way, and working with kids, I’m able to explain it to anyone, like, ‘I solved this problem for this reason.’”

Both Code Ninjas and iCode are maintaining social distancing through small class sizes, with an average of about eight students per class.

iCode Sugarland had what Abedi called a “soft opening” a few weeks ago after six months of construction. In addition, iCode has been regularly holding open houses to serve as free trials for parents, including one Friday and Saturday. A link to register for classes or for the open house is available on the iCode Sugarland Facebook page.

“This is a great alternative in a really safe environment,” Abedi said. “I think it’s an innovative approach to a complex problem that we all face.”

Abedi and Sinha said some parents were hesitant to send their children back, and many are still participating in classes remotely.

“Some parents are very thankful that this is a great alternative,” Abedi said. “And some parents are more conservative. They don’t want their kids to go out. We all have different thoughts and different risk tolerance, so one solution doesn’t apply to all parents.”

iCode’s classes range between $6-$7 per hour. Classes at Code Ninjas are less than $10 per hour, at a rate of $75 per day or $335 for five days. The Code Ninjas Riverstone Facebook page includes information for parents, including its certification as an FBISD learning center.

Ultimately, Sinha said she’s trying to prepare the students that come through her doors or enter a virtual Code Ninjas program from home with the foresight and care she provides for her own children.

“In all of this, as tough as it is for the kids, they’re learning a very important lesson,” Sinha said. “Things happen, but we move forward.”