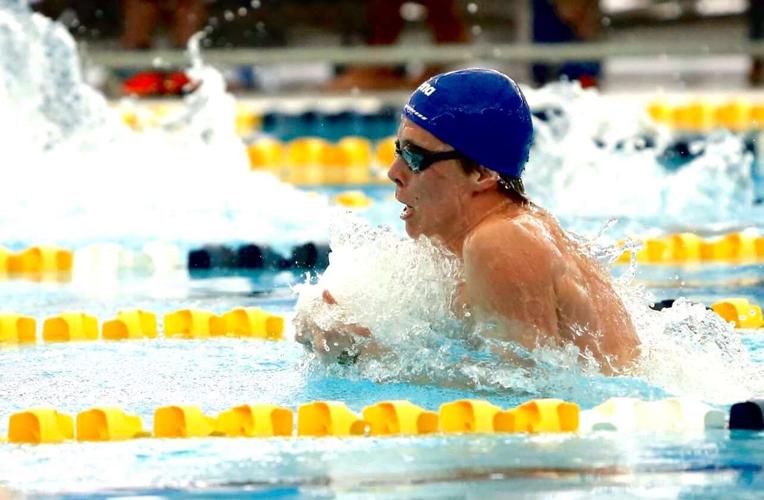 Clements’ Logan Brown will be participating in the 200 IM and 100 breaststroke at the Class 6A swim meet, as well the 200 freestyle relay. (Contributed photo) 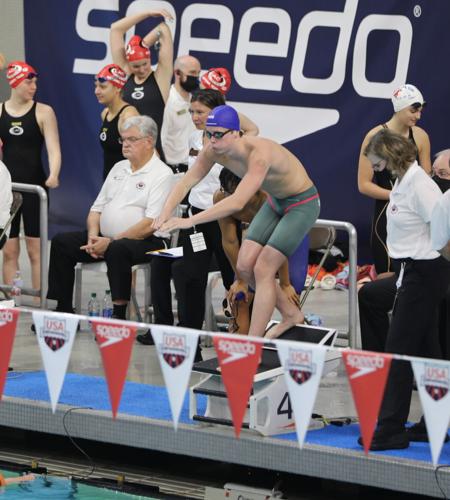 Clements’ Logan Brown takes off from the starting blocks during a race. The 16-year-old junior is one of six FBISD swimmers headed to the state meet this weekend in Austin after taking home regional titles in two individual events. (Contributed photo)

Clements’ Logan Brown will be participating in the 200 IM and 100 breaststroke at the Class 6A swim meet, as well the 200 freestyle relay. (Contributed photo)

Clements’ Logan Brown takes off from the starting blocks during a race. The 16-year-old junior is one of six FBISD swimmers headed to the state meet this weekend in Austin after taking home regional titles in two individual events. (Contributed photo)

When Clements High School junior swimmer Logan Brown received an email last year just prior to the District 20-6A swim meet that he had been placed in COVID-19 protocols due to contact tracing, he was disappointed.

As a result of his two-week quarantine, he was unable to swim in any individual events at the district, regional, or state meets despite having trained all year for them, he said. It was a blow – but one he was determined to come back from.

“I just trained for all of this, basically for it to be stripped and taken away,” Brown said of what went through his mind at the time. “So I’ve been training with this in the back of my mind. I wanted to be there next year swimming my own events, excelling both as an individual and as part of a group.”

It’s safe to say that Brown has excelled during his junior season, and then some. He is one of six individual swimmers from Fort Bend ISD who will make their way to the Lee & Joe Jamail Texas Swimming Center on the campus of the University of Texas at Austin for the Class 5A and 6A state meets this Friday and Saturday, along with Austin’s Lawrence Gomez and Kempner’s Luke Milholland-Geach.

Brown stole the show for Clements at the regional meet last week. The 16-year-old took home a regional title in both the boys’ 200 Individual Medley (1:48.49) as well as the 100 breaststroke (54.87), both of which stand as the second-best qualifying times in the state. He was also part of the Rangers’ boys 200 free relay team that finished as regional champs after swimming a 1:24.54, the state’s fourth-best qualifying time.

“I’m really excited this year, because I’m getting the opportunity to have fun racing against the best kids in Texas,” he said. “The atmosphere and everything’s going to be crazy.”

Brown said swimming was a bit of a late discovery, as he didn’t begin in the sport until moving to Sugar Land in 2011. He would then eventually join the First Colony Swim Team – where he still trains – which is where the passion really began, though it still took a couple of years.

About two years into club swimming, he said seeing genuine improvement in his times opened his eyes to where he could go in the sport. He had finally found the perfect landing spot for his talents, after trying his hand at most every sport he could think of.

“It was about putting my head to something and trying to stick with it. I tended to give up on other sports when I wasn’t very good at it,” he said of the drive to keep swimming. “But with swimming, when I was working hard and started seeing the improvement, it actually made me feel good about myself that I was accomplishing something and enjoying it at the same time.”

Brown hasn’t exactly had a picture-perfect story to reach what is - to this point - the peak of his swimming career, either, even before last season’s disappointment. During his freshman year at Clements, he said knee surgery limited him to swimming in just a handful of meets and forced him out of the pool for 3-4 months.

But it was also in the aftermath of the injury and rehab, he said, that he became truly confident in his love for the sport. The jump from his freshman year to sophomore year, he said, was when he realized he could possibly go far with the sport.

“Coming back from that surgery… I knew I was set back compared to my other competition,” he said. “So I really put my head down and knew I had to go in every day and give it my all so I could get back to and ahead of where I used to be.”

Brown said he’s ready for whatever comes in his way at the state meet – after all, it’s been in the back of his mind for more than a year, and he’s put in the hours in the pool he feels have been needed to reach the state’s top high school stage.

But he also knows he would not have gotten to this point without the camaraderie and push of his teammates combined with his own efforts, and believes they have been one of the bigger keys to his success.

“I’ve been training with these teammates for years and seeing them drop times or win an event. I enjoy seeing them succeed just as much as myself,” he said. “It’s a good family atmosphere. When everyone does well, it’s an overall great feeling.”

And especially after last season’s disappointment, he’s simply relishing every opportunity he gets.

“There’s always going to be somebody who is going to give you a good race or a hard time,” Brown said. “So my thing is to just swim my own race and stay in my zone – only worry about the lane that’s in front of me.”