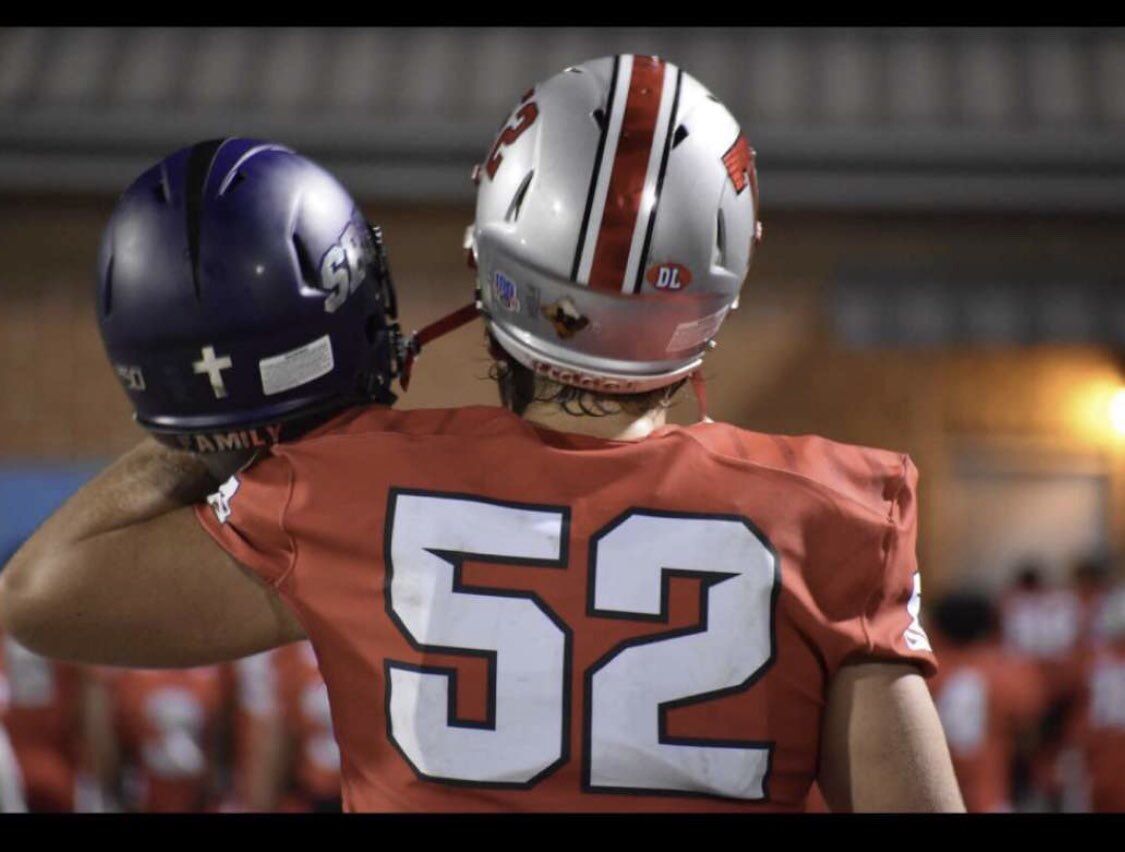 Travis’ Ryder Wall carries Derwyn Lauderdale’s Southwest Baptist University helmet onto the field before an Oct. 16 game against Heights, sporting a “DL” sticker on his helmet. (Photo from Twitter) 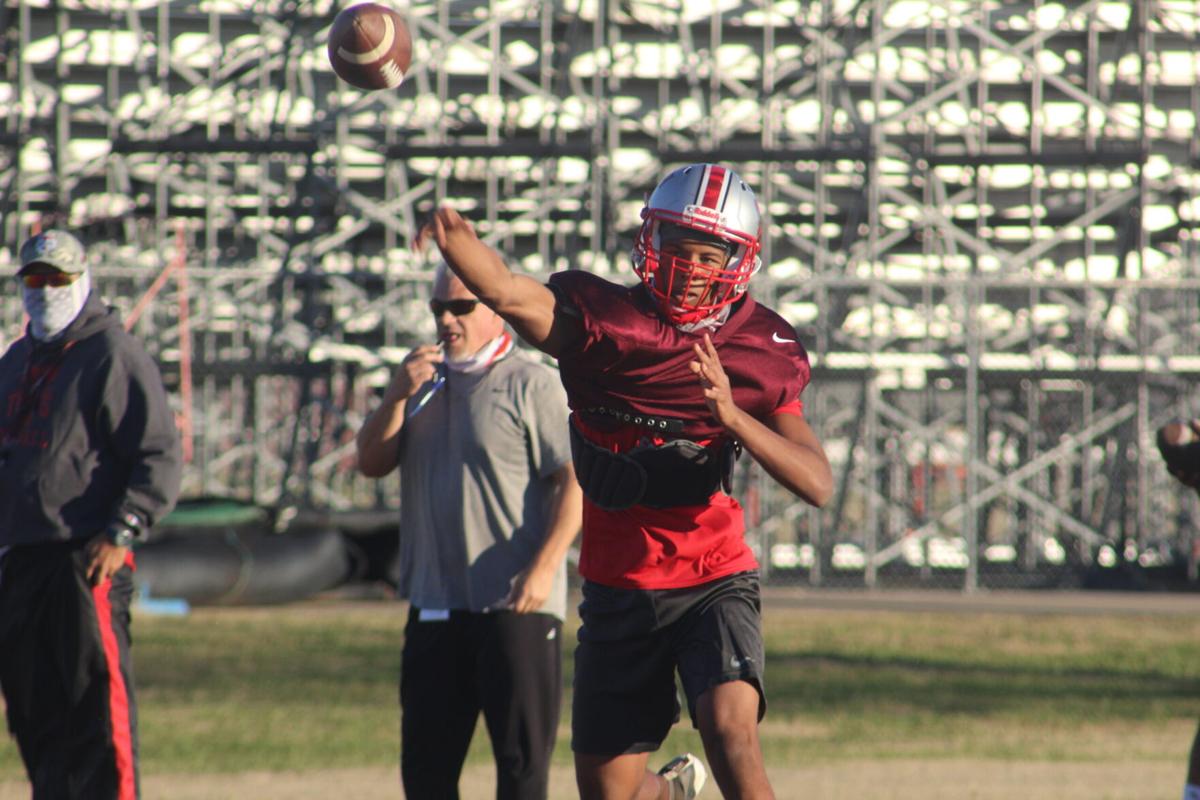 Travis quarterback Anthony Njoku throws a pass during the Tigers’ practice Monday afternoon. The Tigers, who are playing Katy Tompkins in a Class 6A Division I bi-district game this Friday, have played this season in honor of late coach Derwyn Lauderdale, who was killed Oct. 10. (Photo by Landan Kuhlmann) 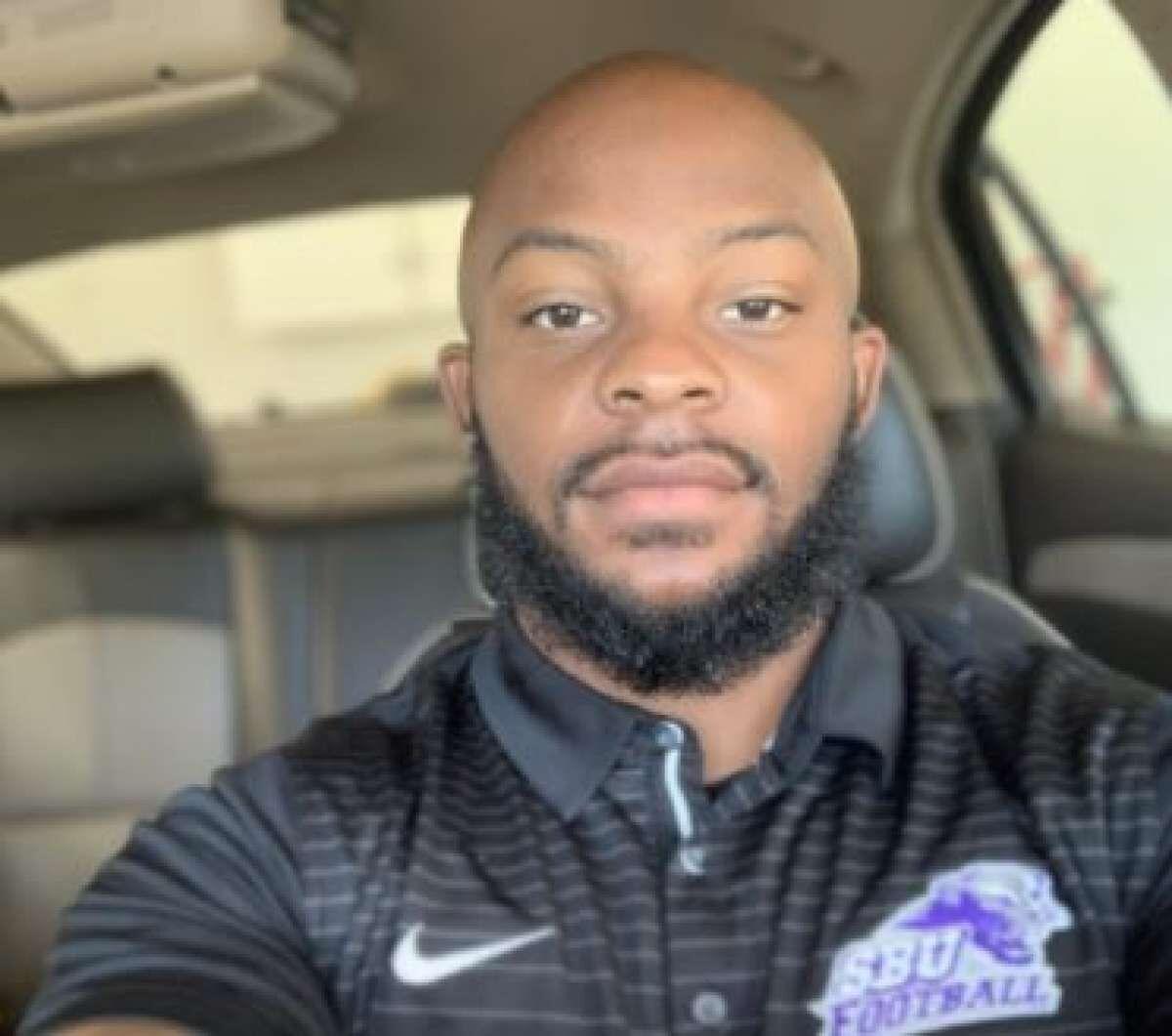 Though the Travis Tigers are used to the football postseason, they’ll play it this year with an added weight, carrying memories of a late coach in their heads and hearts.

As has been the case for much of the season, the Tigers (4-4) will be down a coach in Derwyn Lauderdale – who was shot and killed in October – when they take the field Friday night against Katy Tompkins in a Class 6A Division I bi-district matchup.

And though the tragedy was two months ago, head coach Trey Sissom said it remains fresh in the minds of many players and coaches.

“There’s still those wounds and things that are there. I don’t know for some of us if we’ll ever completely get over it. I don’t think you ever get over something like this,” Sissom said. “You just learn to live with the pain.”

Sissom said the news of Lauderdale’s Oct. 10 death – he was shot at a youth sports complex in Rosenberg – hit the team like a bombshell. It threw another wrench at a 2020 season already impacted by the COVID-19 pandemic, and still follows the team around even as the school has produced a playoff-bound team for the seventh straight season.

“Every kid copes a little bit differently depending on what you’ve gone through,” Sissom said. “Some people have lost loved ones that are really close, and we had other kids who haven’t experienced anything like that. The biggest thing (this season) was just teaching the kids to cherish every moment – you never know what’s going to be laid out and nothing is guaranteed.”

A different kind of adversity

Even though he is gone, Lauderdale’s presence can still be felt each game day. Every player wears a “DL” decal on the back of his helmet, and Sissom said Lauderdale’s deep purple Southwestern Baptist University football helmet is on the sidelines every week.

Much like the University of Miami has its “Turnover Chain,” the Tigers have dubbed Lauderdale’s helmet the “Turnover Helmet.” Whoever creates a turnover gets to come over and slap the helmet, reminding themselves that Lauderdale will always be a part of them.

“Every day here we talk about life. It’s definitely a different type of adversity, but we really came together as a team,” senior safety Cameron Oliver said. “On and off the field we have a really tight bond as a team, so we came together to try to play for him and compete this season for him.”

It’s a simple way, Sissom said, to commemorate a man who had a deep impact on the team despite a brief stay. Lauderdale was in his first year as Travis’ wide receivers coach.

“One of the reasons I was excited about having him on our staff is that he kind of gave new life to our program and brought a new perspective. He brought that life to the program that the kids fed off of,” Sissom said. “You can’t overstate the importance of that to them. You can see that lasting impression with them – they’ll have that same impression of him for the rest of their lives.”

The adversity has been especially deep for Sissom, who had known Lauderdale for more than 10 years. Sissom became the offensive coordinator at Houston’s Bellaire High School, where Lauderdale was a star wide receiver, in 2009.

It was the beginning of what Sissom considered a lifelong friendship.

“I always kidded him about coming down here and working for me. I tried for years and years to get him to come back down here,” Sissom recalled with a laugh. “We’d always try to find the time to sit down and have a meal or two and talk some ball. Anytime they were in town, we’d try to get together as families.”

Alas, the pair was able to coach just one game together – and that Oct. 8 game against Montgomery Lake Creek will stay with Sissom for years to come.

“Some things are outside your control, and you’ve got to make everything count,” he said. “Hopefully you take the time to look back at the good times and remember those little moments you may have taken for granted.”

Born to be a mentor

Sissom said Lauderdale was constantly mentoring and coaching after an ACL tear effectively put an end to his playing days, never forgetting his roots. From coaching middle school ball in Houston to training Bellaire players on breaks from college and even taking Sissom’s son, Drew, under his wing, nothing would get in his way.

“Some people, God just meant to be coaches. Everything he did was about making the kids better and finding a way to let football be the guiding light for some of these kids,” Sissom said. “In certain situations, this is the only thing kids have, the only type of direction or discipline instilled in some of these kids. Derwyn really took to heart how important football could be to helping these kids out.”

“He showed us the importance of true family – how to have someone on your side that you can talk to every day, someone you can go and joke around with whenever you’re having a bad day,” he said. “He’s just always someone who was there for us.”

One of the things that defined Lauderdale, Sissom said, was his ability to find optimism in every situation. He recalled an anecdote from a few years ago when Lauderdale tore his ACL in his first game as a professional while playing for an arena league team in Utah.

Instead of spiraling, Sissom said, Lauderdale changed course and rolled with the punches. He had to do the same earlier this season, when the Tigers’ opener against Richmond Foster was cancelled because of COVID-19 and hastily rescheduled against Lake Creek.

“That’s just the way Derwyn was. There were a lot of things that happened in his life that could get you down, and people could stay down about. But he wasn’t about that,” Sissom said. “He was about finding the positive and making the best out of a situation. … I can remember just the excitement that he had getting out on the field with those kids and going to the game.”

Lauderdale will forever live on in the hearts and minds of this Travis team, whether the Tigers lose this week or end up hoisting a state championship trophy.

Oliver will remember most every moment.