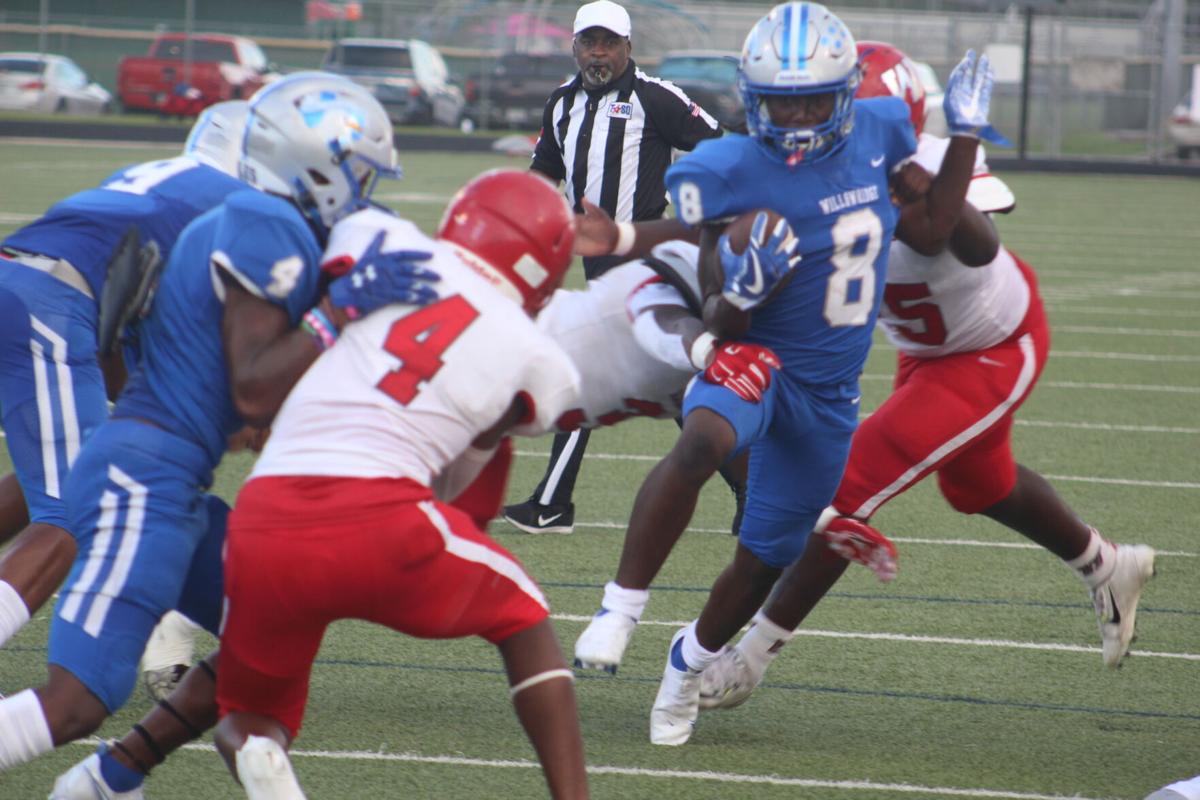 Willowridge's Javin Chatman fights through tacklers during the Eagles' Sept. 18 game against Houston Waltrip at Hall Stadium. Chatman and the the Eagles will square off with the Marshall Buffalos on Friday in a battle of the last two remaining undefeated teams in 11-5A play. (Photo by Landan Kuhlmann) 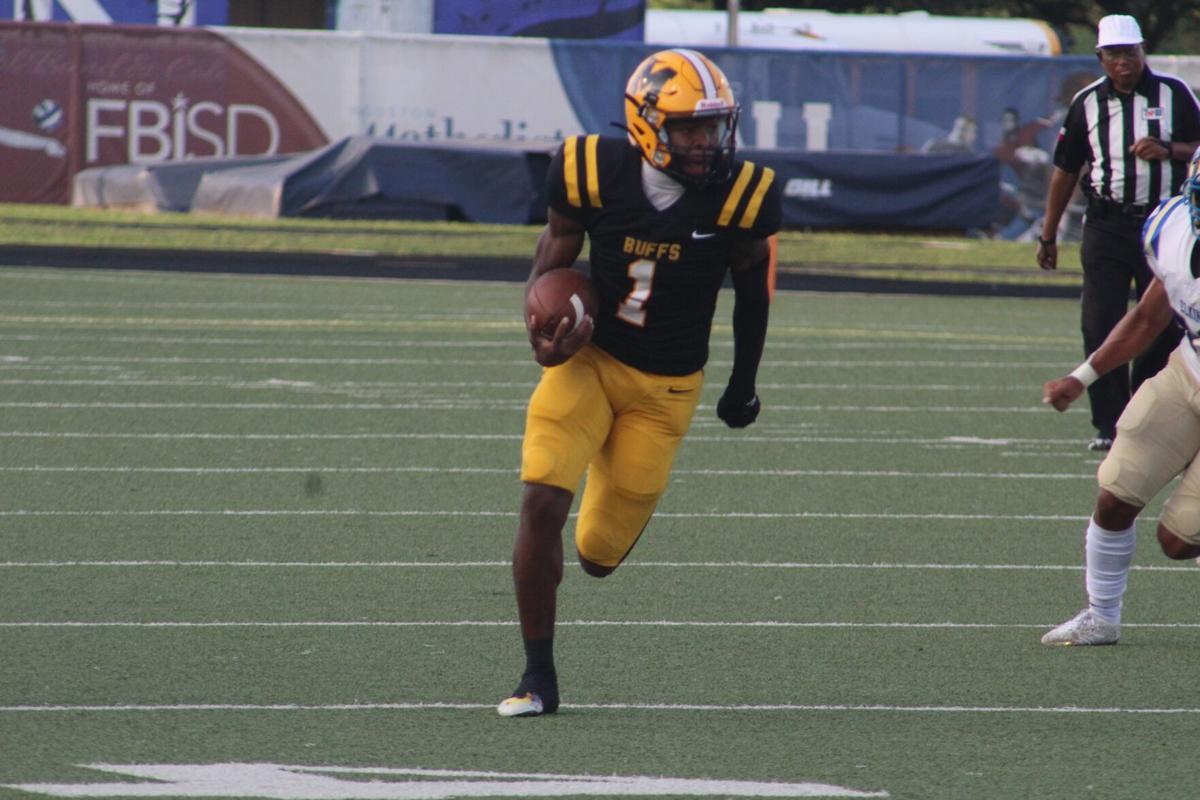 Marshall quarterback Ja'koby Banks runs down the field during a Sept. 2 game against Elkins. Banks and the Buffalos clash with Willowridge on Friday looking to win a 20th straight district contest. (Photo by Landan Kuhlmann)

Willowridge's Javin Chatman fights through tacklers during the Eagles' Sept. 18 game against Houston Waltrip at Hall Stadium. Chatman and the the Eagles will square off with the Marshall Buffalos on Friday in a battle of the last two remaining undefeated teams in 11-5A play. (Photo by Landan Kuhlmann)

Marshall quarterback Ja'koby Banks runs down the field during a Sept. 2 game against Elkins. Banks and the Buffalos clash with Willowridge on Friday looking to win a 20th straight district contest. (Photo by Landan Kuhlmann)

If there was ever a time for the Willowridge Eagles to make a statement, this week presents a prime opportunity as they welcome in fellow District 11-5A unbeaten Marshall in what looks to be the premiere high school football matchup in Week 8.

The Eagles (4-1, 4-0 district) have relied on a stout defense for their second consecutive 4-0 start in district play, while the Buffalos (7-0, 5-0) have dominated on both sides of the ball and are a traditional district power in recent seasons.

Willowridge is looking to break an 11-game losing streak in the head-to-head series, while Marshall is looking to win its 20th straight district contest.

Marshall brings a multitude of weapons to the table in this one. Their high-powered offense is no secret around these parts, as they lead all of Class 5A Division II in scoring at 56.3 points per game and are the 11-5A leaders with better than 394 yards of offense per contest. Quarterback Ja’Koby Banks leads the district with 1,077 yards and 20 touchdowns, and has added more than 600 rushing yards and 11 touchdowns on the ground. His favorite target, Chris Marshall, leads 11-5A with 364 receiving yards to go along with nine touchdowns.

The Buffalos are just as stout on defense, giving up a district-best 8.9 points per contest while forcing 13 turnovers, which ranks second in the district.

On the other side, it has been the Willowridge defense driving its hot start, ranking second behind the Buffalos in scoring defense by allowing 84 points in five games (16.8 points per game) and forcing a district-leading 15 turnovers in the process. One of the leaders on the defensive side is Marxquise Hayes, who leads 11-5A with three interceptions. Travis Willis has two interceptions of his own, while Raymond Olvera and Jaden Mack have recovered two fumbles apiece.

When the Eagles do have the ball, Hayes and Willis have been two of their main weapons. The sophomore pair has 448 yards and six touchdowns between them, and have combined to average nearly 16 yards per reception. Senior running back Javin Chatman leads Willowridge’s rushing attack with 410 yards and five touchdowns.

Here are a few more players and matchups to watch this week:

The Rangers’ win over Elkins last week was bittersweet, as starting quarterback Micah Darnell suffered a broken collarbone late in the second quarter according to a VYPE report. As such, look for backup Gunner Chenier to look to these two senior receivers as safety blankets of sorts. Smith and Marcus Darnell have combined for 861 yards and eight touchdowns between them.

On the other side, Njoku has amassed more than 800 total yards and 12 touchdowns over his last four games, and will be depended on Saturday if the Tigers want to bounce back and avoid a two-game losing streak.

The Broncos’ defense has been a huge factor in their perfect district start, and the senior defensive back has been a big part of the plan. Hackworth has three interceptions this season, all of them coming over the last three weeks. He also had an 85-yard punt return for a touchdown in last week’s win over the Travis Tigers.

Not much has gone the Bulldogs’ way so far this season, but Franklin has been a bright spot. The junior wide receiver has nearly 600 all-purpose yards this season to lead Austin, including 249 total yards (153 receiving, 96 rushing) and two touchdowns in last week’s 35-21 loss to George Ranch. He will likely need to be heavily involved once again on Friday if the Bulldogs want to get their first win of the season.