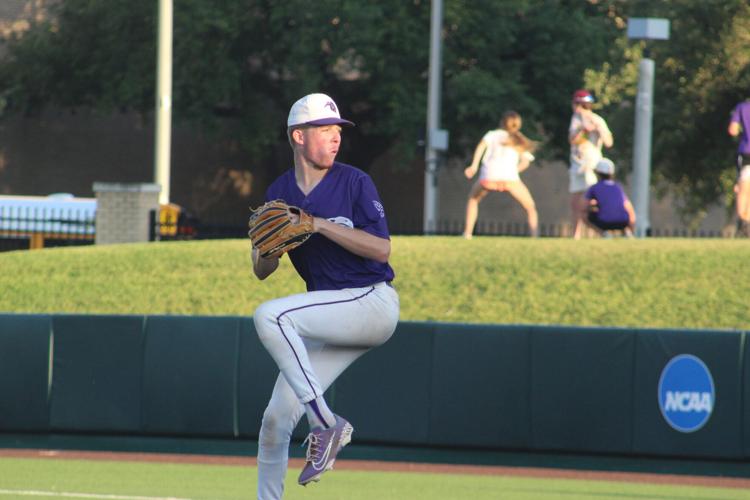 Ridge Point’s Hunter Nichols winds up to throw a pitch during the Region III-6A final last Friday against Strake Jesuit at Darryl and Lori Schroeder Park at the University of Houston. Nichols struck out 10 batters to help the Panthers win the regional title. (Photo by Landan Kuhlmann) 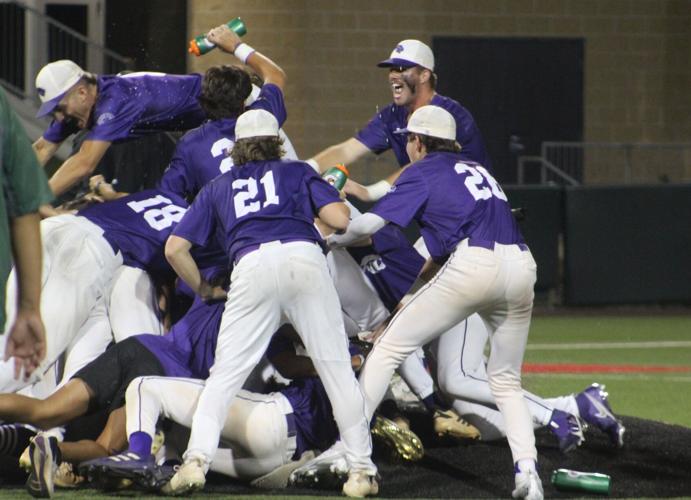 The Ridge Point baseball team dogpiles on the mound after clinching a state tournament berth last Friday at Darryl and Lori Schroeder Park at the University of Houston. Ridge Point plays Southlake Carroll in the state semifinals on Friday.(Photo by Landan Kuhlmann)

Ridge Point’s Hunter Nichols winds up to throw a pitch during the Region III-6A final last Friday against Strake Jesuit at Darryl and Lori Schroeder Park at the University of Houston. Nichols struck out 10 batters to help the Panthers win the regional title. (Photo by Landan Kuhlmann)

The Ridge Point baseball team dogpiles on the mound after clinching a state tournament berth last Friday at Darryl and Lori Schroeder Park at the University of Houston. Ridge Point plays Southlake Carroll in the state semifinals on Friday.(Photo by Landan Kuhlmann)

As battery mate JJ Kennett put the sign down for a two-out, full-count offering in the seventh inning of last Friday night’s regional final against Strake Jesuit, Hunter Nichols said he was ready for the moment.

Still, he said, not much compares - yet - to the feeling of actually clinching a trip to the state tournament. And Nichols did just that with his final pitch, blowing an 88 mile-per-hour fastball past the Crusaders’ last hitter to send the Panthers’ faithful into a frenzy.

“As soon as I threw it, I knew out of my hand it was good,” Nichols said. “I saw him swing through it, and then it was just a rush of emotions after that.”

Nichols’ 10th strikeout of the game was his biggest of the season, as the Panthers defeated the Crusaders 2-1 to punch their ticket to the state tournament. It is the second state berth in the last three postseasons for the Panthers (35-5), who will take on Southlake Carroll (32-8) in the state semifinal at 4 p.m. Friday at Dell Diamond in Round Rock.

If they are victorious on Friday, the Panthers would play the winner of Rockwall Heath and San Antonio Reagan at 4 p.m. Saturday for the Class 6A state title.

“If you had told me last year that I would’ve been here, I’d have thought you were crazy. But we worked our butts off all year for this,” Kennett said. “…We’d all been talking about the dogpile – it’s a moment you’ll never forget with all your brothers.”

The Panthers emerged out of a tough Region III-6A bracket, a playoff run which has seen them sweep top-ranked Katy Tompkins in the regional quarterfinals in addition to taking out the Crusaders – the defending regional champions – last weekend.

And as evidenced by both results and their outward confidence, the Panthers were unfazed by the draw. In fact, senior infielder Justin Vossos said they relished the gauntlet and that it prepares them even more for the competition in Round Rock.

He called Tompkins one of the best lineups in the state and regional semifinal opponent Pearland one of its deepest pitching staffs, while the Crusaders’ resume as defending regional champions spoke for itself.

“We want to play the best, and there’s no reason to not want to play the best,” said Vossos, a Texas A&M commit who is the lone remaining member of the 2019 team which played in the state title game. “It makes you a better player, creates a more fun atmosphere and better games. We weren’t fazed by anything, though – we knew if we played our game that we’d be fine.”

The Panthers’ game, players said, is predicated on pitching, defense, and timely hitting – all of which have come up big at one point or another during the current run.

Ridge Point’s pitching staff has been superb all postseason, allowing a grand total of 24 runs in 12 playoff games. Nichols and Kellen Gradisar have powered the Panthers’ staff, throwing a combined 65.2 innings in their 10 postseason starts while allowing just 15 combined runs.

Both Nichols and Grasidar have thrown multiple complete games, including one apiece in the regional finals against Strake Jesuit.

“I knew that if I started Game 1 that I would have to set the tone,” Gradisar said.

The Panthers have also gotten 14.1 postseason innings from freshman left-hander Jack McKernan, who has struck out 13 batters while surrendering just two runs.

“When (Coach Welch) tells us that we’re getting a certain game…we’re all ready for it,” Nichols said. “We’re not scared of the moment, and nobody gets flustered on the mound.”

Further, the Panthers’ lineup has been opportunistic throughout the postseason with multiple comeback wins. Seven of their 12 postseason games have been decided by two runs or fewer.

Carter Groen has two walk-off hits in the playoffs, while Vossos had a two-out, tiebreaking RBI triple in the seventh inning last Friday. It’s all part of the Panthers’ mentality, players said, and Vossos said the team relishes the opportunities up and down the lineup.

“Everybody wants to be the guy, but nobody is really trying to be the guy,” junior first baseman Travis Vlasek said. “(Justin) happened to be the guy (on Friday), and he did it. You’ve got to just do what you can do. We take a lot of pride in that, just doing what we can control.”

Not to be outdone, the Panthers’ defense has also come up big, with Kennett throwing out multiple attempted base stealers this postseason and Owen Farris making a running catch on the warning track for the first out of the seventh on Friday night.

“Part of the reason for (our pitching) is because we’ve got a lockdown eight guys outside the pitcher,” Nichols said. “Everybody on the field has saved me multiple times. Knowing that I have that kind of defense helps so much, because I know the majority of the time nothing’s getting down.”

The Panthers may have a little bit of a score to settle on the surface, as Southlake Carroll defeated Ridge Point in the 2019 state championship game. But ultimately, Vossos said, the game of baseball never changes at its core, and neither does the Panthers’ game plan.

It’s a once-in-a-lifetime moment for many, he said. But they know they’re in the current position for good reason, and are trying to keep an even keel of emotion on the eve of Friday’s matchup.

“We’ve played great teams all year, and it’s going to be three more great teams up there,” Vossos said. “We play our game, and we’ll be fine.”