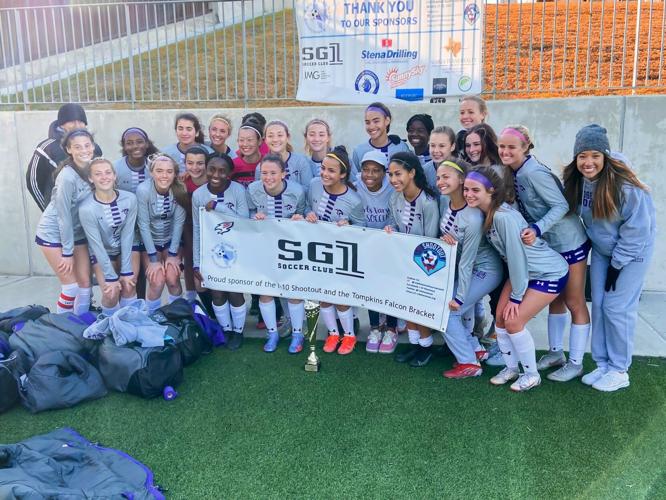 The Ridge Point Lady Panthers soccer team celebrates after winning the I-10 Shootout in Katy on Jan. 15. Ridge Point is 7-0 on the season thanks to the scoring prowess of Zoe Main, among others. (Photo from Twitter) 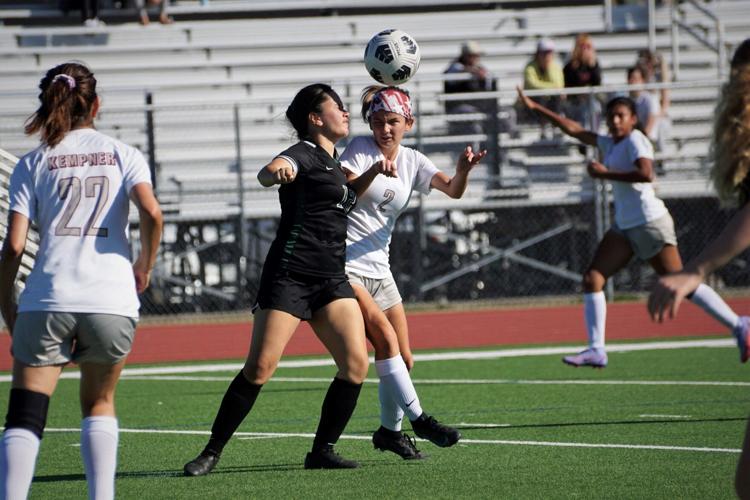 Kempner's Elizabeth Werts (#2 in white) battles a defender for the ball. Werts scored two goals last weekend as the Lady Cougars went 2-1 in the I-10 Shootout in Katy. (Photo from Twitter)

The Ridge Point Lady Panthers soccer team celebrates after winning the I-10 Shootout in Katy on Jan. 15. Ridge Point is 7-0 on the season thanks to the scoring prowess of Zoe Main, among others. (Photo from Twitter)

Kempner's Elizabeth Werts (#2 in white) battles a defender for the ball. Werts scored two goals last weekend as the Lady Cougars went 2-1 in the I-10 Shootout in Katy. (Photo from Twitter)

Multiple Fort Bend ISD girls’ soccer teams headed north to Katy for the I-10 Shootout last weekend, and several area teams produced strong showings, but one stood out above the rest.

The Ridge Point Lady Panthers paced the area's girls squads, going 3-0 on the weekend to claim a second title in tournament play to begin the year and showing they are still a force to be reckoned with in the region despite graduating 11 seniors from last year’s team.

Ridge Point (6-0) had a pair of 1-0 wins over San Antonio Johnson on Jan. 13 on Katy Jordan on Jan. 14 before taking down Cy Woods by a score of 5-1 in the Falcon Bracket final. Zoe Main scored the lone goals for the Lady Panthers against both Johnson and Jordan. Hannah Warken was the star of the match in the final against Cy Woods, putting home a career-high four of the Lady Panthers’ five total goals in the contest.

Following a hiccup in the season’s opening week, the Kempner Lady Cougars looked more like last season’s team with a 2-1 week at the tournament. Kempner beat Cy Ridge on Jan. 13 and Katy Mayde Creek 3-0 on Jan. 14 before falling to Grand Oaks 4-0 in the tournament final on Saturday. Three different players scored for Kempner (3-4) against Mayde Creek on Jan. 14, with Ava Baley, Elizabeth Werts, and Dalia Ghazal each finding the back of the net.

Madison McCoy scored once apiece for the Austin Lady Bulldogs against Cypress Creek on Jan. 13 and Alvin on Jan. 14. Gabby De Jesus scored twice in their 3-1 victory over Alvin, then twice more in a 3-0 win over Katy Taylor as the Lady Bulldogs (3-3) finished 2-1 in Katy.

The Elkins Lady Knights defeated Spring Woods 2-1 on Jan. 11, then went 2-1 at the I-10 shootout. Sarah Lovetinsky and Ellie Pitts each scored two goals for the Lady Knights (7-2) in a 4-0 win over Santa Fe on Jan. 13, while freshman Amelia Olawu had a pair of her own in a 3-2 win over Oak Ridge on Saturday. It was the fourth multi-score outing of the season for Olawu, who has a team-leading 10 goals so far.

Elsewhere, the Dulles Lady Vikings were the champions of the San Bernard Classic on Jan. 14-15. They split a pair of games on Jan. 14 with a 2-1 loss to Cy Springs in penalty kicks and beating Rosenberg Terry. Then on Saturday, they won 3-1 in penalty kicks against Shadow Creek to take home the title.

The Austin Bulldogs won their only game of the week, a 2-1 victory over Katy on Jan. 14. Alfio Parisi and Kam Cortez each scored for Austin (4-0), while Dillon Trimble had an assist.

Tim Koon scored both goals for Clements in their 3-2 loss to Cy Ridge on Jan. 14, which dropped them to 1-4 on the season.