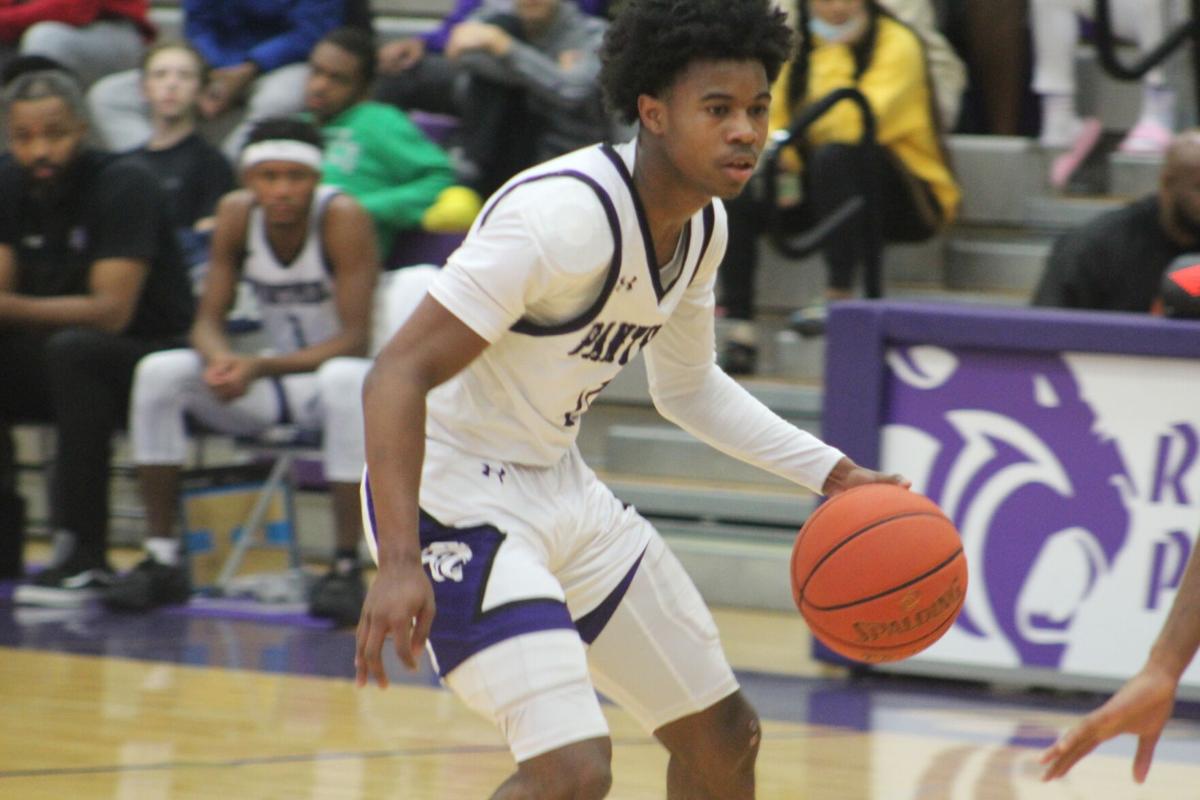 Ridge Point's T.J. Ford Jr. prepares to cross over during last Saturday's game against Dulles. The son of former Willowridge star and NBA point guard T.J. Ford, Ford Jr. is looking to carve out his own path in basketball. (Photo by Landan Kuhlmann) 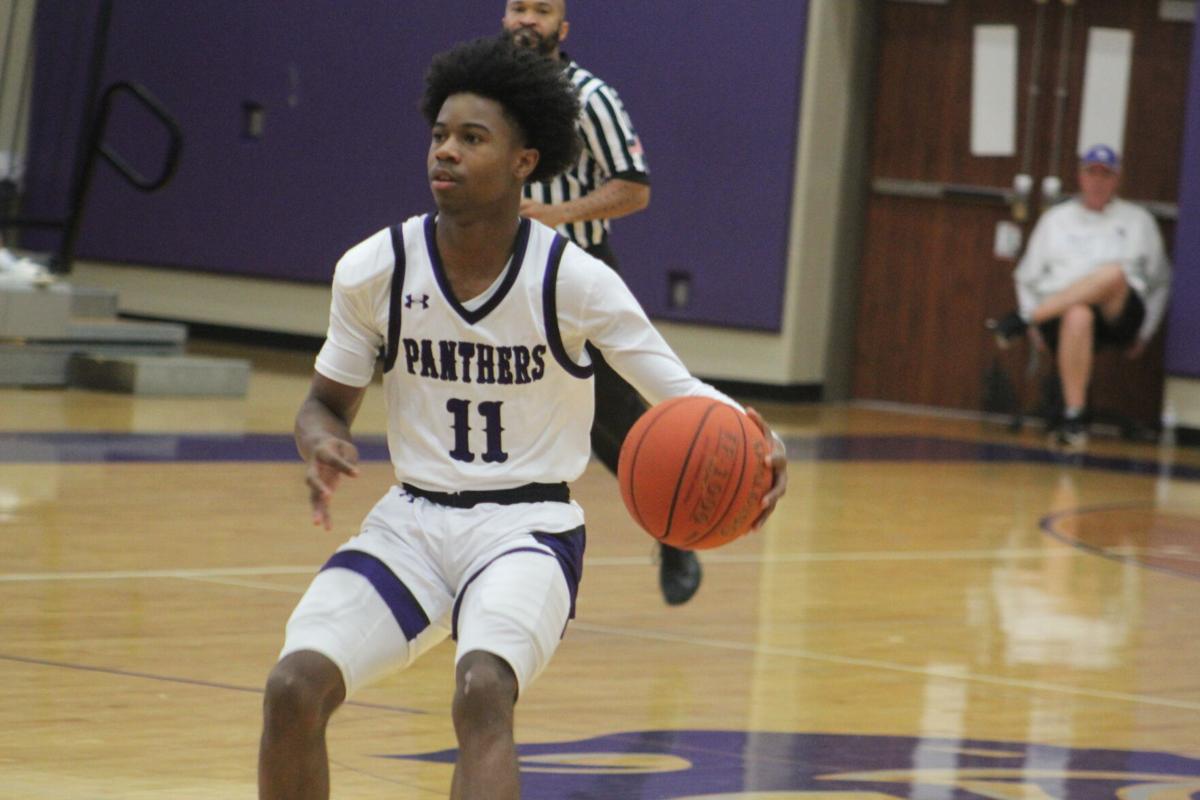 T.J. Ford Jr. has been one of the driving forces behind Ridge Point's success so far this season. (Photo by Landan Kuhlmann)

Ridge Point's T.J. Ford Jr. prepares to cross over during last Saturday's game against Dulles. The son of former Willowridge star and NBA point guard T.J. Ford, Ford Jr. is looking to carve out his own path in basketball. (Photo by Landan Kuhlmann)

T.J. Ford Jr. has been one of the driving forces behind Ridge Point's success so far this season. (Photo by Landan Kuhlmann)

T.J. Ford Jr. knows many immediately zero in on his name and think he might be on a predetermined route.

However, Ridge Point High School’s junior point guard has long been determined to make a name for himself on his own merits – not riding the coattails of his father. He’s the son of T.J. Ford, a Willowridge graduate who starred at the University of Texas before playing eight seasons in the NBA – but Ford Jr. is quickly letting the area know he’s a unique player on the basketball court.

“It’s a blessing to have that knowledge I can gain access to that not many people have, and he does help me along the way," the younger Ford said. "But really it’s about how to make my own way. (My dad) is helping me get on my own way and forge my own path.”

Ford Jr. has been racking up both points and accolades so far this season. He is averaging about 13 points per game along with about six rebounds per contest in helping the Panthers (15-7, 3-0 District 20-6A) back to a familiar perch at the top of District 20-6A. At both the Fort Bend ISD and Brazosport ISD tournaments earlier this season, he was named to the all-tournament teams.

The 5-foot-9, 160-pound Ford Jr. is a dynamic playmaker, according to first-year Ridge Point head coach Darren Johnson, which might draw comparisons to a father who was named national player of the year in college before being a first-round draft pick in the NBA. But the younger Ford has visions of even greater things for his own journey.

He already has a college scholarship offer from Texas-Arlington and has taken unofficial visits to both Creighton and Texas A&M.

“The goal is to watch how (my dad) did things, and hopefully take that and become better off with it,” Ford Jr. said. “I see the things that he’s done, and want to try to have a higher achievement status – (take it) and try to be better.”

More than meets the eye

Johnson said Ford Jr. has become an unquestioned leader for the Panthers, who graduated six seniors from last year’s regional semifinal squad. In turn, he has taken some of the burden off of the coaching staff, according to Johnson, who is content to let the burgeoning star do his thing.

“We just kind of gave him the keys, and built trust with him to go out and let him play his game," Johnson said. "He does a lot outside (the school) that helps his game. I never want to handicap a kid or stop him from being who he is. He’s been really good at understanding his role and not trying to do more than he has to.”

Following some early bumps in the road, the Panthers have reeled off six wins in their last seven games. And Ford Jr. is a big reason for that surge, according to his head coach.

Leading the team was not initially a given considering Ford Jr. had to get accustomed to the role after coming off the bench last season.

“You could tell it was awkward for him at the beginning trying to be the leader, but he’s grown into the role and he’s liking it now," Johnson said. "He’s performing, and it’s worked out for the best.”

Ford Jr. is the team’s leading scorer and rebounder and is also second on the team in steals. Johnson said Ford is a complete player, with a basketball IQ to match his natural ability on the floor.

“Guys listen to him, and we haven’t had any issues with the buy-in, which helps us a lot," Johnson said. "He’s done a really good job, and the IQ matched with focus and understanding the game plan is great. The offense takes care of itself, but those (aspects) are what really help him lead these guys on the court and in the locker room.”

That’s a point of pride for Ford Jr., who said it was a lesson from his dad that drives him to play the way he does.

“He always taught me to play hard,” Ford Jr. said. “No matter how I played overall or how I do, everyone can say that I played hard from the first quarter to the fourth quarter.”

Ford Jr. said there is a little bit of his dad present in his game – which was inevitable being the son of an NBA point guard. But also present, he said, is shades of current NBA superstars such as Kyrie Irving and Trae Young as well as Stephen Curry.

He said he has also drawn influence from the work ethic of former Houston Rockets star James Harden, who he got to see work out in person at his dad’s basketball academy last year. And Ford Jr. knows he has a wealth of knowledge and opportunity to use on his basketball journey, such as seeing Harden work out firsthand.

But his head coach said it hasn’t gone to the head of Ford Jr., who is maintaining a youthful mindset. Whether he’s slashing to the basket on the court or munching on dry cereal out of the box in the locker room, Johnson said Ford Jr. has managed to block out much of the hype.

“People see the name and automatically assume that he’s one way, but the refreshing part of being around him every day is that he’s a kid – he enjoys being around his teammates and having fun. ... T.J. likes the same things any kid likes,” Johnson said. “It’s extremely rare, and I’ve been around other kids that are not that way. He could easily have a different outlook on life because of the name, but he doesn’t do that. He’s trying to do it himself.”

It’s a balance, Ford Jr. said, and he still has taken more than a few of his father’s pointers to heart. But the younger Ford said his dad had also encouraged him to take his future into his own hands – which he has already begun to do.

“He taught me to have tunnel vision. You’ve got to have your own vision for how you want to do things, and see it through with how you want to do it,” Ford Jr. said. “…I’m just going to continue to play hard, because then more people will show respect and look at me.”