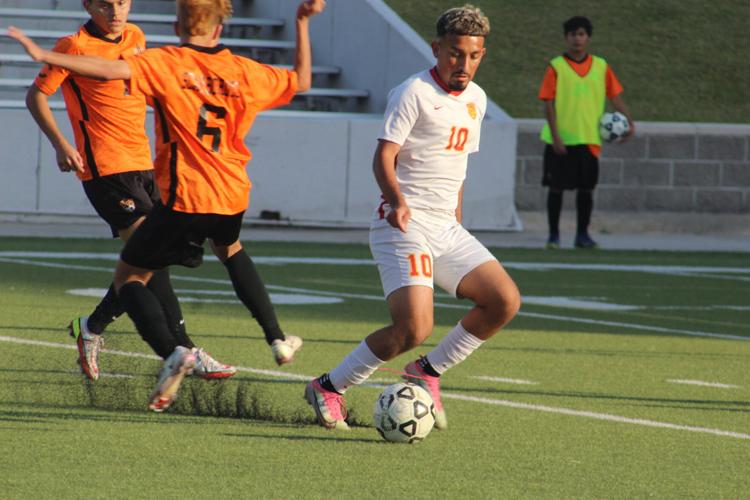 Stafford’s Justin Zenteno attempts to control the ball during an April 1 playoff match against Houston Scarborough. The Spartans fell to Boerne in the Class 4A state semifinals last week. (Photo by Landan Kuhlmann) 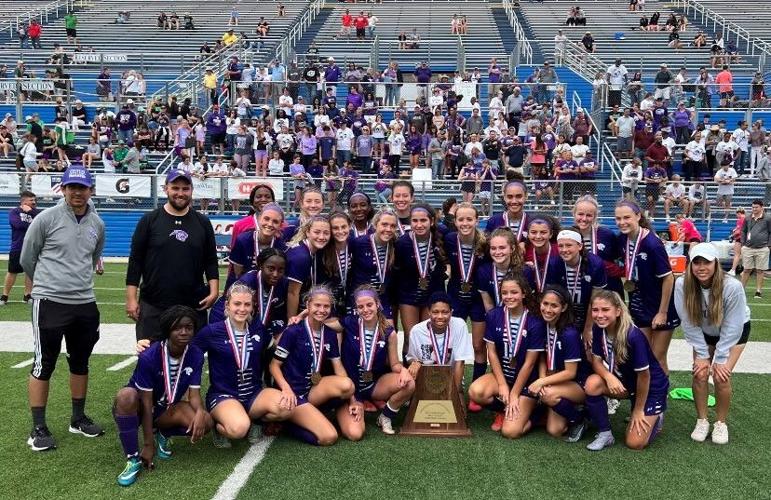 The Ridge Point girls’ soccer team poses for a photo with the state semifinalist plaque after last Friday’s loss to Rockwall. Ridge Point finished the season with a 26-1 record. (Photo from Twitter)

Stafford’s Justin Zenteno attempts to control the ball during an April 1 playoff match against Houston Scarborough. The Spartans fell to Boerne in the Class 4A state semifinals last week. (Photo by Landan Kuhlmann)

The Ridge Point girls’ soccer team poses for a photo with the state semifinalist plaque after last Friday’s loss to Rockwall. Ridge Point finished the season with a 26-1 record. (Photo from Twitter)

Stafford’s boys and Ridge Point’s girls both fell short of a championship, with each team losing in the state semifinal matches of their respective classifications to bring historic seasons to a close for both programs.

The Spartans’ boys’ team saw its season end with a 7-1 loss to Boerne in the Class 4A semifinal on Wednesday at Birkelbach Field in Georgetown. Aron Maldonado scored the lone goal in the match for Stafford, which finished the best season in school history with a 20-6-4 record and the program’s fifth district championship over the last seven seasons.

It was the deepest playoff run in program history. This season was the fourth time in head coach Ruben Perez’s nine seasons that Stafford had reached the regional tournament, but the first state trip for the program.

“We accomplished some goals that we had set earlier in the season,” Perez said. “We wanted to win (the) district, navigate through the playoffs, then break through the regional tournament. ...I told them at the end of the game that they’re going to look back and see all the great things that happened through the season.”

Stafford will lose 15 seniors from this season’s team including Maldonado – their leading scorer – but will likely return players such as second-leading scorer Jonathan Rivas. Maldonado and senior defender Daniel Torres were named to the Class 4A boys’ all-tournament squad.

And though it may have ended with a painful memory that will sting for the near future, Perez said he was determined to help his team focus on what they accomplished - energizing a community that buoyed their play throughout the postseason, with fan buses and student sections cheering them on.

“ I reminded them ‘you made history.’ When you look back at this season, there’s a lot to be proud of,” he said. “...I have a lot of thanks and appreciation towards all the fans, families, and friends we had with us all season long.”

Later in the week, the Ridge Point Lady Panthers’ quest for perfection came to an end with a 4-2 loss to Rockwall in extra time on Friday morning.

The Lady Panthers took an early lead Friday thanks to a goal from University of Houston commit Charlotte Richardson in the 12th minute, then got a late equalizer from Dayo Tennyson in the 76th minute to force extra time. However, they eventually succumbed to the Yellowjackets’ attack, which scored twice in the last five minutes of extra time to come away with the win.

Ridge Point finished the program’s historic season with a 26-1 record and the first state trip in school history. Main - who was also the District 20-6A Most Valuable Player - and Tennyson were named to the UIL’s Class 6A girls’ all-tournament team for the Lady Panthers.

“It really was a roller coaster the entire match,” head coach Evelyn Torres said. “...The girls showed a relentless effort. I’m just so proud of them and how hard they’ve worked to get to where we were. We couldn’t have asked for any more from them.”

Six seniors – Kaia Brown, Carly Burch, Megan Mercado, Emily Warnken, Devon Roundtree, and Lauren Walker – will graduate from a Lady Panthers squad that helped usher in history for the school. However, they look to be well set for another run next season with plenty of firepower returning.

Among likely returners for Ridge Point include Oklahoma commit Zoe Main and Tennyson as well as defender Georgia Mulholland (Baylor), Richardson, and forward Hannah Warnken. Also set to return are goalkeepers Molly Thompson and Alicia Audu, who helped the Lady Panthers with 23 combined clean sheets over the course of the season.

Ridge Point will likely start next season as one of the favorites to make it back to Georgetown again - a feat Torres believes they are prepared to achieve.

“I think we’ve created a great foundation, a great journey for the girls to achieve knowing that we’ve already walked this path before, and we can walk it again,” Torres said. “It’s going to take more effort, more energy, more everything – because we’re going to have the target on our back next year.”