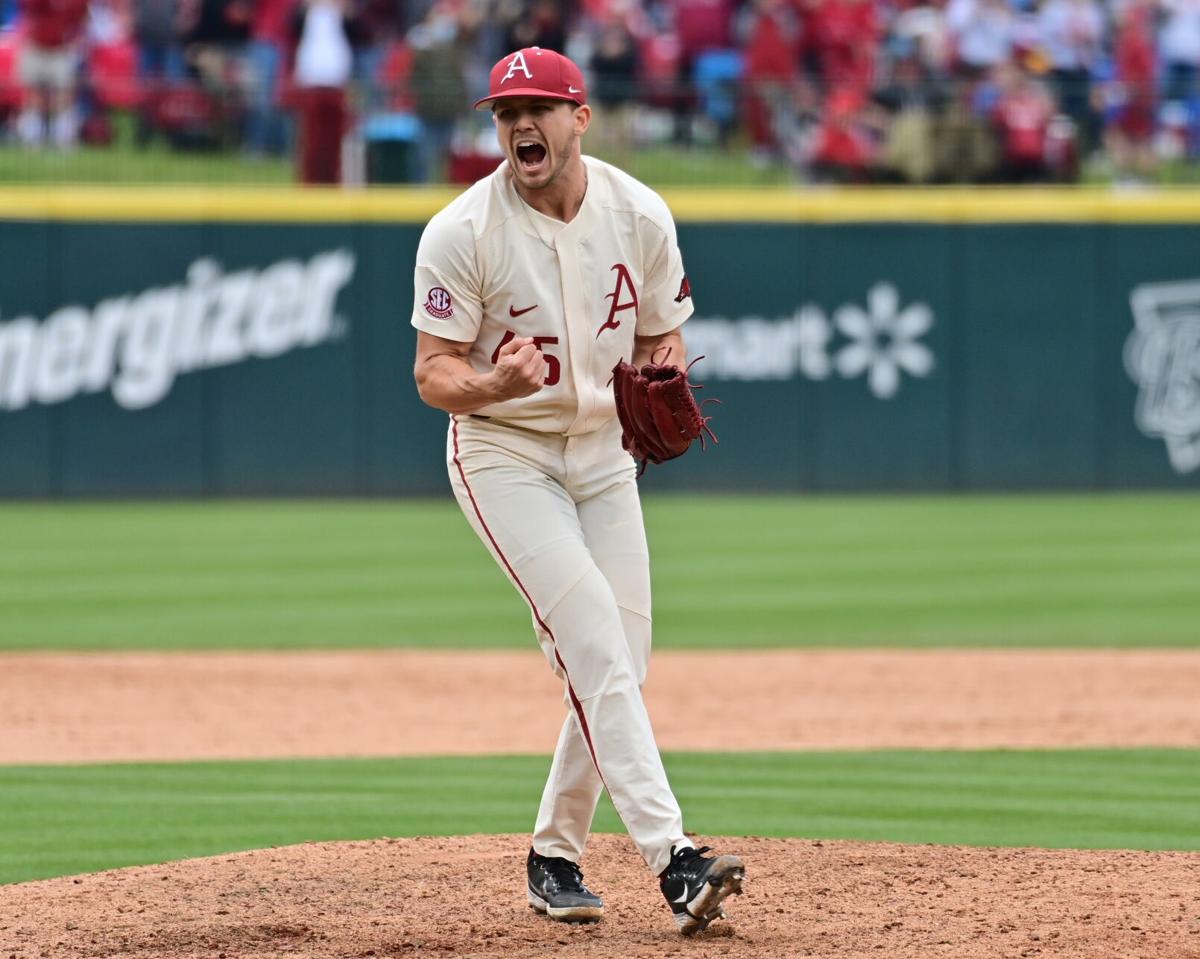 Kevin Kopps reacts after recording the final out of a May 9 game against the Georgia Bulldogs. The Sugar Land native finished the season as one of college baseball’s top pitchers, winning multiple national awards. (Photo courtesy of University of Arkansas Athletics) 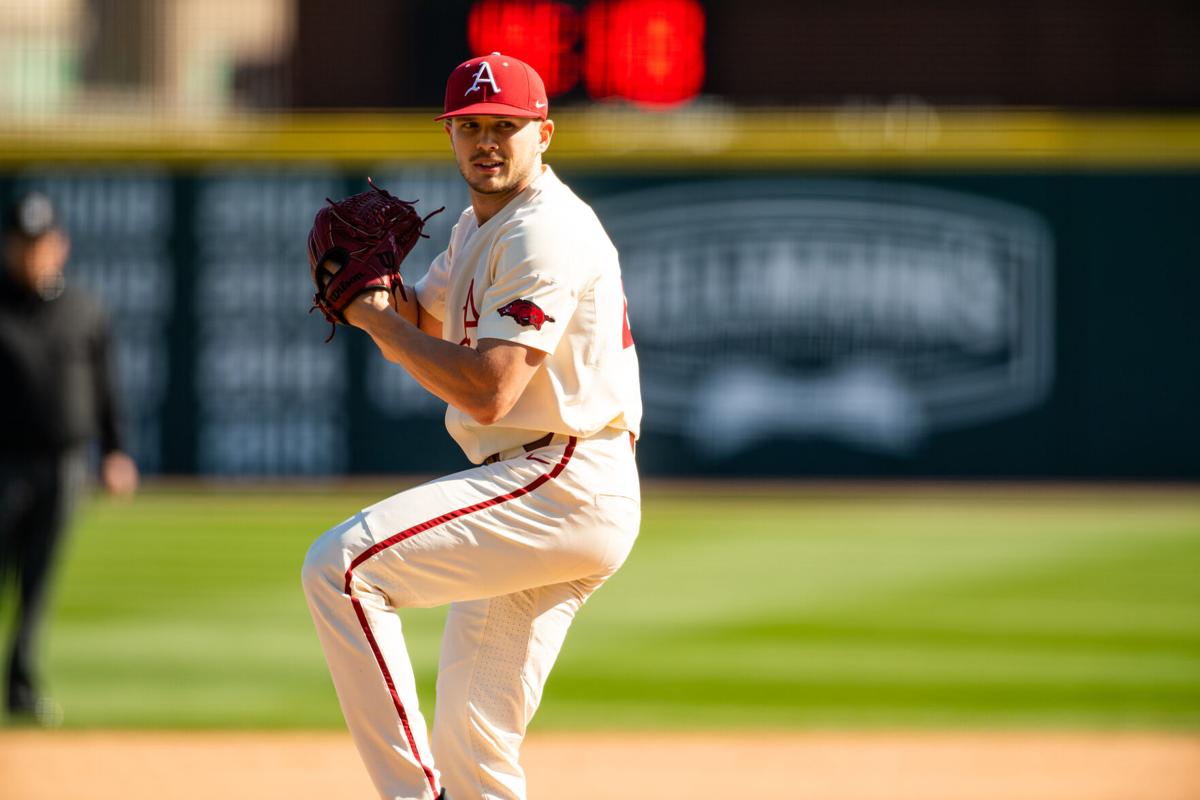 Kevin Kopps winds up to throw a pitch. Kopps became one of college baseball's elite pitchers over the course of the season. (Photo courtesy of University of Arkansas Athletics)

Kevin Kopps reacts after recording the final out of a May 9 game against the Georgia Bulldogs. The Sugar Land native finished the season as one of college baseball’s top pitchers, winning multiple national awards. (Photo courtesy of University of Arkansas Athletics)

Kevin Kopps winds up to throw a pitch. Kopps became one of college baseball's elite pitchers over the course of the season. (Photo courtesy of University of Arkansas Athletics)

Baseball and life are defined by failure or falling in some manner.

In baseball, it can be the best hitters failing seven out of 10 chances, the best pitchers giving up a few runs every game, or an unfortunate injury derailing a journey. In life, failure can mean falling short of your own or someone else’s expectations.

Kevin Kopps has seen almost every one of those curveballs during his life, but has come back stronger each time – a trait he credits to his family and his Christian faith, which has shaped much of how the Sugar Land native goes about both life and baseball.

“My faith is the most important thing to me,” he said. “At first it was hard, because I wanted my own plans to happen in baseball and life. But I’ve found comfort in trusting in God’s plan.”

The plans have come up aces lately for Kopps, 24, the University of Arkansas pitcher who on June 18 was named the winner of the 2021 Dick Howser Award – given to the national college baseball player of the year. The 6-foot, 200-pound right-hander is a finalist for the 2021 Golden Spikes Award. He was also the National College Baseball Writer’s Association’s 2021 Stopper of the Year after a season in which he posted a 0.90 ERA and struck out 131 hitters in 89.1 innings for the Razorbacks.

However, there also have been lows for the senior hurler. An elbow injury sidelined him for the entire 2018 season and affected his performance the following two years, dragging out his college career and possibly lowering his stock as a Major League Baseball prospect.

“Most kids want (to go to college) for three years, then have a really good junior year and get drafted. That’s obviously not how my route went – I’ve had a lot of ups and downs in my career,” he said.

But those dark nights appear to have brought forth even brighter days.

“He recognizes what God can and will do on his behalf as long as he’s giving Him his best effort,” Kopps’ father, Rick, said. “He understands not everything is going to play out according to our desires, but that it’s according to God’s timing as long as we wait on those answers. We’ve seen the outpouring of blessings in the answers we’ve gotten this year.”

After redshirting out of George Ranch High School in 2016, Kopps had a 3.31 ERA during the 2017 season. Then he had to undergo elbow ligament replacement surgery, commonly known as Tommy John surgery, following the season

“It was pretty depressing at the time – you live your life for 20 years, then you have to do something else for a while,” he said. “I started to throw left-handed just to get over that, because I missed throwing a baseball so much.”

He knew, however, that to get back stronger would require the tedious rehab work. Kopps called his father the most influential figure in keeping his eyes on that prize, which he said was 3-4 hours per day, and continuing his baseball journey.

"He taught me how to work hard and that the most important times to do the work are the times you don’t necessarily want to," he said.

After missing all of 2018 and being granted a medical redshirt, Kopps posted a 4.78 ERA in 52.2 innings during the 2019 and 2020 seasons, leading to doubts as to whether he should even come back for his senior season that was granted to all spring athletes during the COVID-19 pandemic.

It was just the latest in a line of setbacks for Kopps, a self-admitted introvert who said he already struggled with self-confidence prior to the surgery and on-field performance. But a preseason conversation with Arkansas pitching coach Matt Hobbs appeared to turn the tide.

“(Coach Hobbs) just told me that I was going to be an All-American,” he said. “That always stuck with me during the season.”

Though he eventually became one of the nation’s best college pitchers in 2021, Kopps said sparkling numbers or potential draft stock has been secondary to his Christian faith throughout the process. It shapes how he reacts to any situation, he said, and is a pillar he has leaned on throughout his life. Two verses in particular that Kopps said he clings to manifested themselves in tangible ways during his college career.

Proverbs 24:16, which reads, “A righteous man may fall seven times, but gets up again,” has been key throughout his journey, whether it be Tommy John rehab, the difficult times in his life when struggling with self-confidence, or something else.

And in recent weeks, he captured the national spotlight once again. But it wasn’t for pitching heroics. Instead, it was for demonstrating another of his favorite verses – Galatians 6:9, which reads, “Let us not become weary in doing good, for at the proper time we will reap a harvest if we do not give up.”

Following the Razorbacks’ June 13 loss to North Carolina State in the NCAA Super Regionals, which ended their season, Kopps stayed on the Baum-Walker Stadium field for more than an hour signing autographs for eager fans. He was only a few minutes removed from taking the loss, having pitched a complete game.

And if it seemed like an above-and-beyond gesture, it should have.

“That might be someone’s only chance to see me play and get an autograph. One of the things I hold onto is that for me, the best way to show God’s love is to love other people,” he said. “(Signing those autographs) is the best way I can do it to fill people with God’s love. … I hold onto that in continuing to do God’s work the best that I can, even though I’m not going to be my best all the time.”

For his father, seeing his son think of others before himself was nothing new.

“He realizes it’s still bigger than himself. Even though it didn’t end up exactly as we’d all wanted it to, he’s still made sure he’s giving back. That makes us very proud,” Rick said.

As winding and topsy-turvy as it may have been, Kopps’ college career has finally come to an end. But his road to playing Major League Baseball may just be getting started, with the MLB first-year player draft occurring July 11-13.

There also appears to be plenty waiting in the wings should life throw another curve post-graduation. Kopps received his undergraduate degree in biomedical engineering and is working toward his master’s degree in business administration.

“Whether this MLB thing works out or not, you feel good as a parent that your child will be able to take additional steps in the future to take care of himself,” his father said. “Those are the things we envision as a parent when our kids are young. It’s a good feeling to see that come to fruition.”

Whether or not he winds up being drafted or ever taking a major league mound, Kevin Kopps takes comfort in his faith, for he is all too familiar with how things can change.

“I feel like God likes to change my plans – especially through (Tommy John) and how long I’ve been at Arkansas,” he said. “… So I don’t really worry about it too much.”